Every year, I’m officially ready for the holiday season when three things happen: 1) I stop being surprised by all the Christmas commercials; 2) I begin to toy with the idea that maybe, just maybe, this will be the year I learn to like egg nog; and 3) Simon Doonan’s Christmas windows at Barney’s are unveiled. 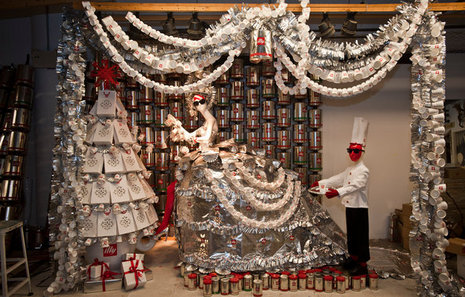 Last year, I actually got to see the SNL-themed displays, sporting a Conehead Christmas and an extra-large Mango, Gilly, and Mary Catherine Gallagher. This year, Doonan and co. have hit the kitchen for inspiration.

“The foil’s so fantastic, you could stitch it and use it for hot pants,” Doonan said. That may be, but he’s opting instead for a more elegant look, pleating, piercing and crimping foil iperEspresso capsule bags into a voluminously skirted gown…When they’re unveiled on Nov. 16, the store’s Madison Avenue windows will also include insouciant paeans to chefs like Jean-Georges Vongerichten, Lidia Bastianich, Jamie Oliver and the late Julia Child. Doonan, who claims he knew nothing about food and approached the project as if he were the anthropologist Margaret Mead, worked with Lee Schrager, the founder of the South Beach and New York City Wine & Food Festivals, to edit the list of 70 gastronomic personalities caricatured in the windows.

“I’m interested in the dissonance between fashion and food,” said Doonan.

Someone take a few photos and share them with us, please?