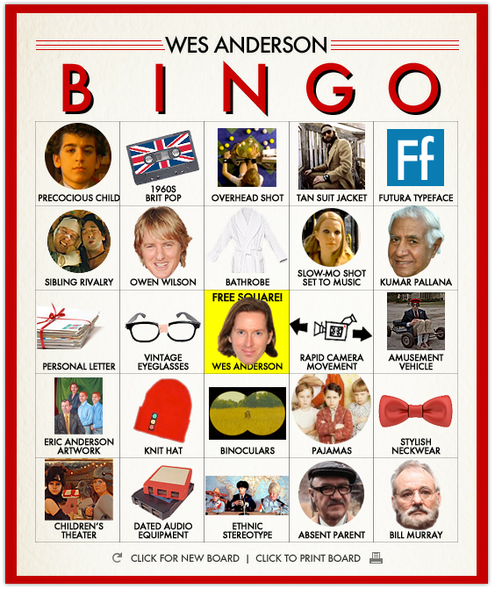 Whether you’re excited for Moonrise Kingdom to show up in your local theater, or frequently pop in your beloved DVDs of Rushmore or The Royal Tenenbaums, the next time you watch a Wes Anderson film, you simply have got to bring these Wes Anderson bingo cards along.   Slate’s Browbeat blog built an actual generator so you can have an infinite number of bingo cards and actually play a Futura-filled game with your friends.

“Just watch any Wes Anderson movie, and whenever you spot one of the Anderson trademarks listed on your board, click that square to place a special Wes Anderson chip. (You can also print out a set of boards and chips to play offline.) Be the first to get five in a row and shout out “Bingo!” (or, if you prefer, “Hotbox!”) and you’ve won….Each board features 24 out of a possible 32 signature Anderson elements. Each element we selected appears in at least three of his movies, and some elements appear in all of them, so any board could be a winner. Play a few games, and you’ll see just how detailed is the personal stamp Anderson leaves on all his movies. Whether or not that’s a good thing is up to you.”

For extra good times, this could be very easily updated to become a hyper-stylized drinking game.