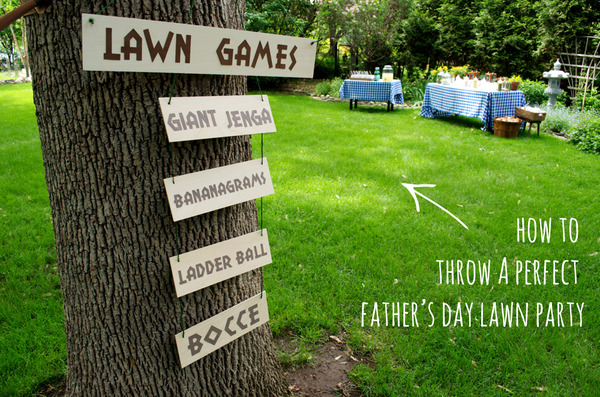 This year we teamed up with Lowe's to throw an early Father's Day lawn party for our friends and family. Today I'll share the nitty gritty details, all the pretty pictures, and (hopefully) inspire you to pull together a few last minute DIYs for this weekend's Father's Day celebrations. Read on to find out what we did, and download everything you'll need to throw a party of your own.

(If you're more of a skimmer than a reader, don't forget to scroll to the very bottom of the post for a link to a free PDF file with all the checklists and resources you'll need to throw this exact party) 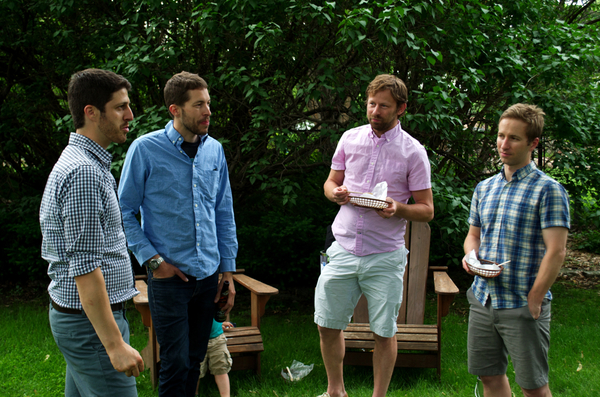 Every great party has a theme, but we didn't want to just stop at “Father's Day”. We wanted to embrace the beautiful early summer season and encourage laid back interaction. We settled on a rustic outdoor picnic theme, with an emphasis on lawn sports. We drew on some Scandinavian influences (we're in Minnesota, after all), with a healthy dose of 'summer camp nostalgia' mixed in.

Here's the mood board we put together last week (read our planning post here): 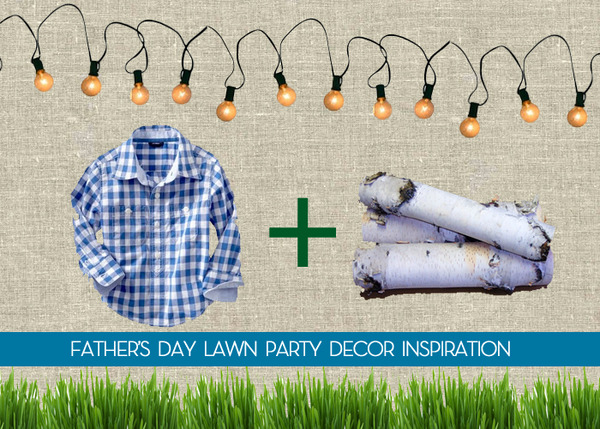 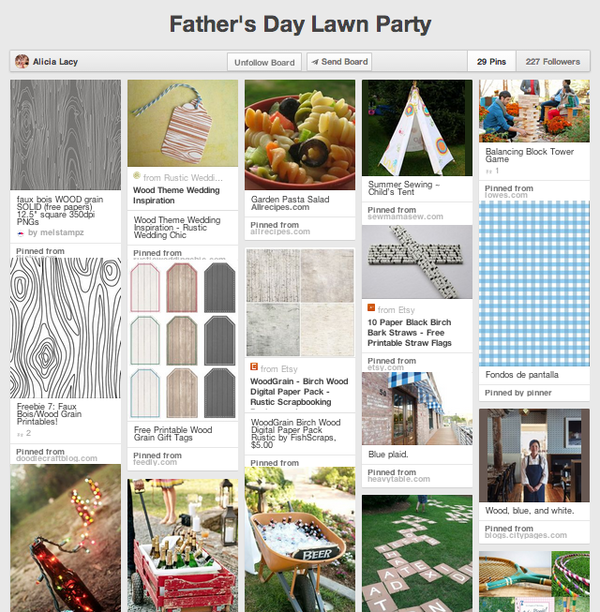 With our theme intact, we centered the decor on the masculine aesthetics of blue-and-white plaid and wood grain. We picked up a bunch of beige canvas drop-cloths from Lowe's to serve as picnic blankets, and added in some simple succulents potted in empty quart-sized paint cans. 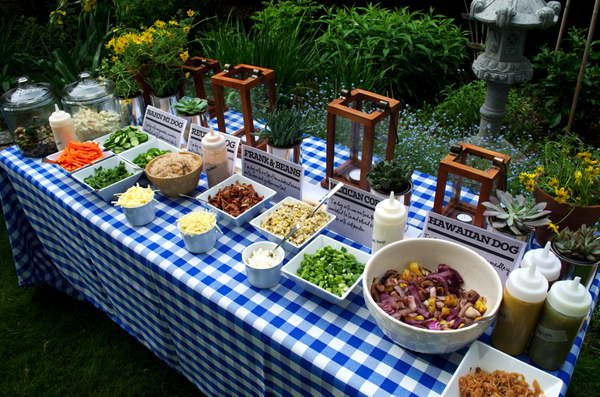 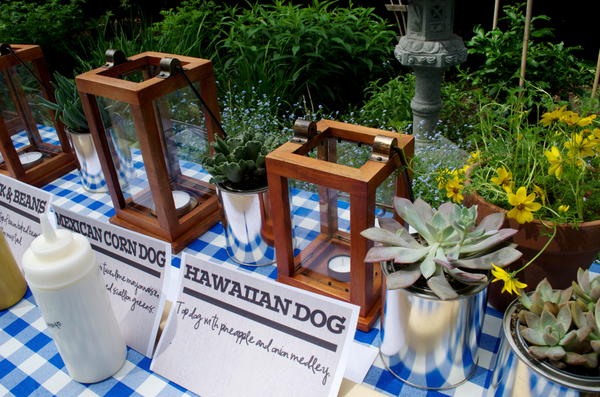 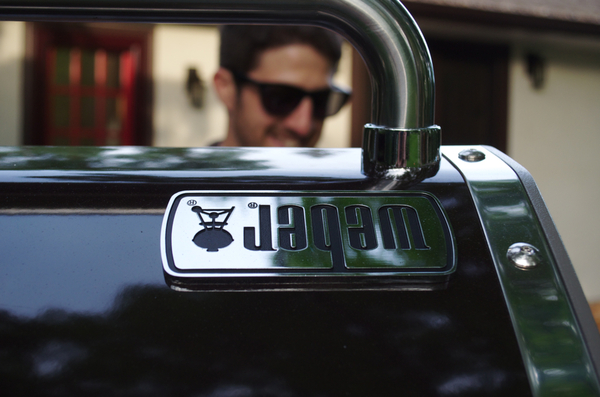 We kept our menu very simple. Almost everything could be prepped in advance, which left only some easy grilling during the party. A gourmet hot dog bar is an affordable, interesting and fun way to feed a lot of folks. We used these five recipes from Nobel Pig (the overwhelming favorite was the Bahn Mi dog – sooooo good). 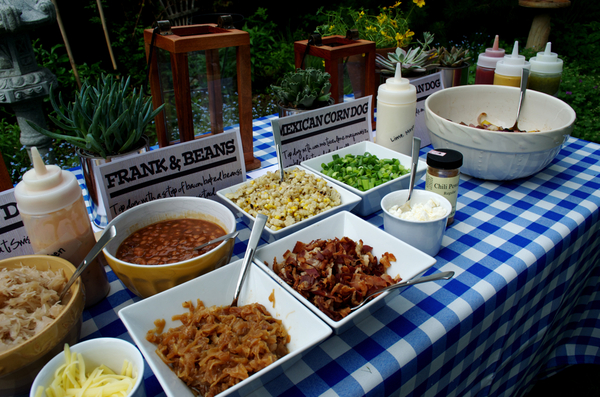 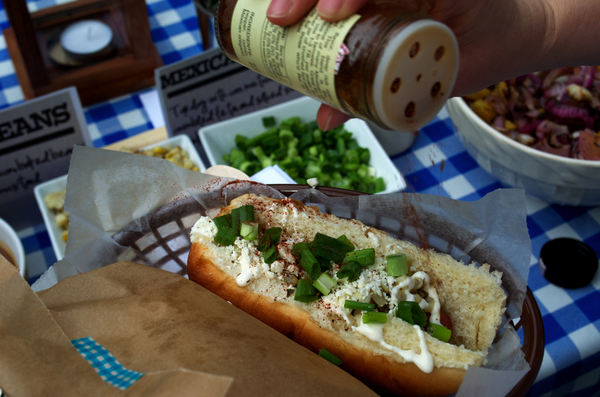 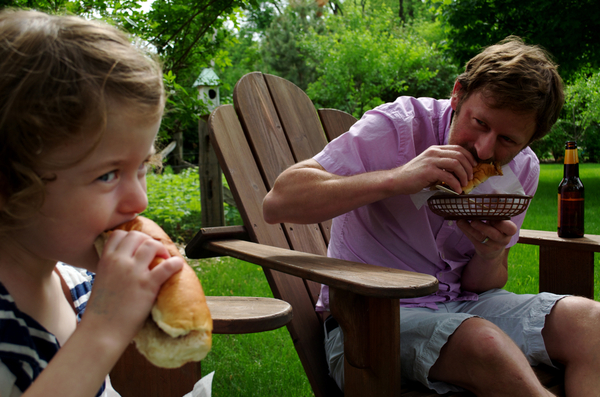 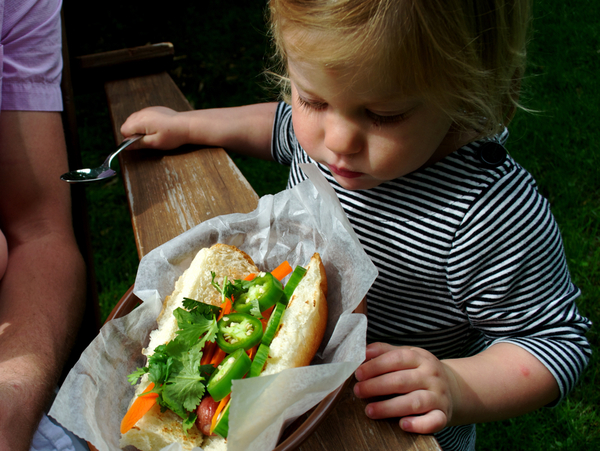 In addition to the gourmet hot dog bar, we served two simple sides: a superfood salad and potato salad. We also bagged our kettle potato chips in paper sandwich bags, which made them easy to grab and go. 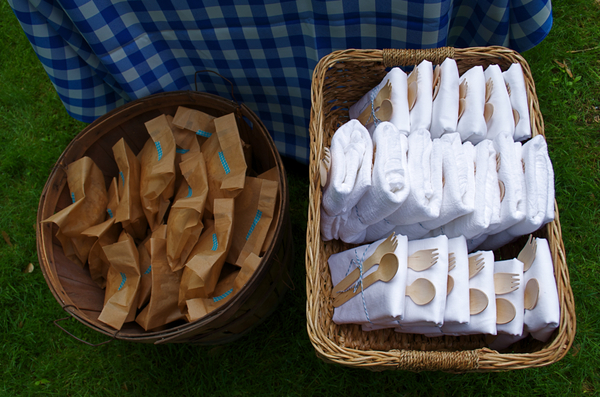 Our beverages were as simple as our hotdogs. We served wine and craft beer in a wagon, and offered sparkling water and lemonade to the young ones (and the pregnant ones – because, at the moment, nearly all of our friends happen to be pregnant). 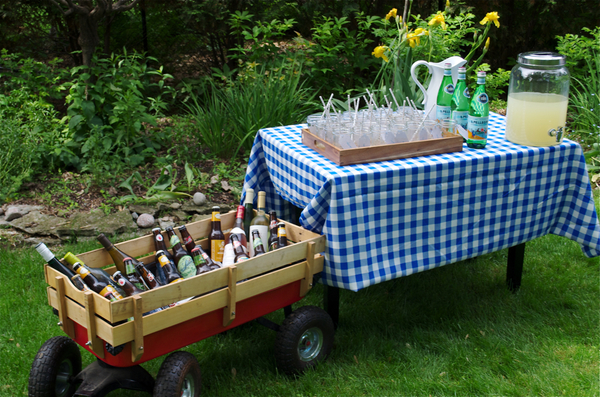 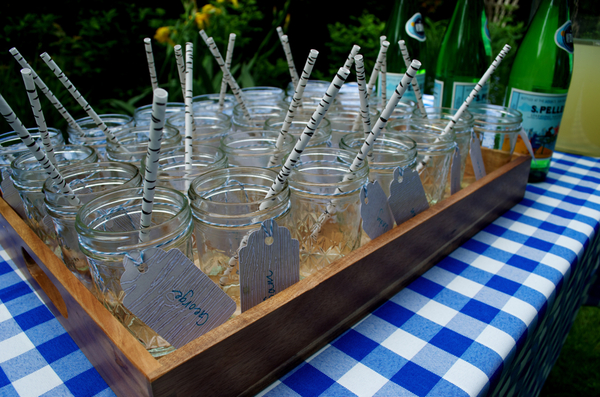 Dessert consisted of homemade ice cream: sea salt caramel, vanilla, and bourbon, and fresh baked cookies. There were no complaints, and no leftovers.

We invited a mix of close friends and family to this party, so we wanted to encourage mingling. Lawn games were an obvious choice. 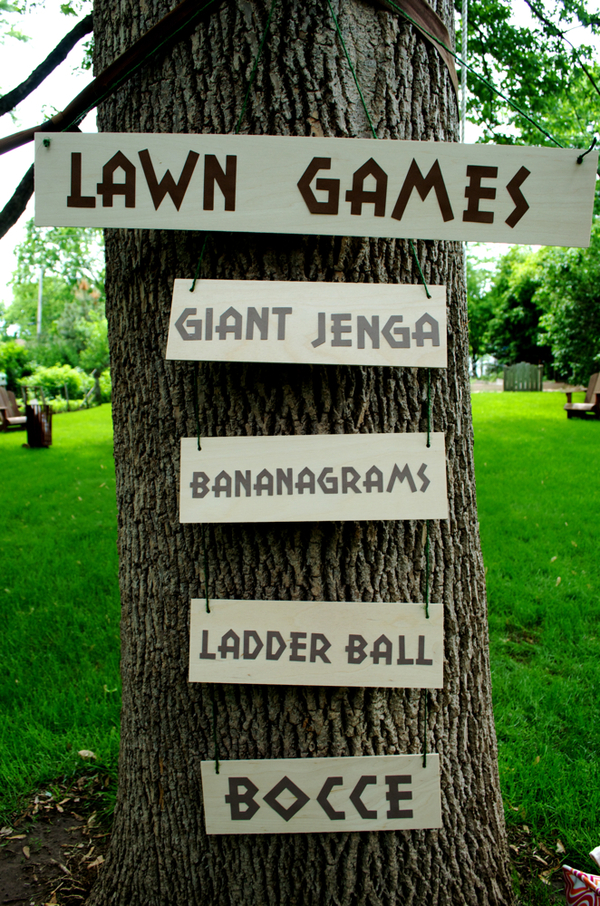 We offered a handful of games: bocce, ladder ball golf, lawn Bananagrams, and a giant Jenga game. The latter two we DIYed, and they were by far the most popular.

For the Giant Jenga game, we simply cut several 2x4s into forty-eight 10.5″ pieces, sanded them, and put them in a Jenga stack. We followed this tutorial to create our game, and it was a favorite. 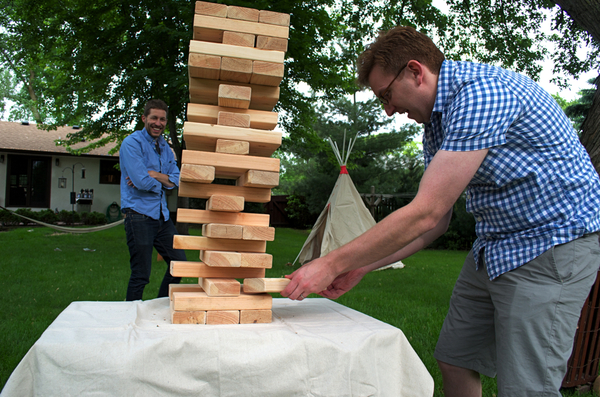 Our Giant Jenga game was fun, but our lawn version of Bananagrams was the crowd favorite. The normal version of the game is fun because of its crossword-like characteristics. The lawn version has the same crossword charm, plus a ton of crazed running and yelling. Highly recommended. 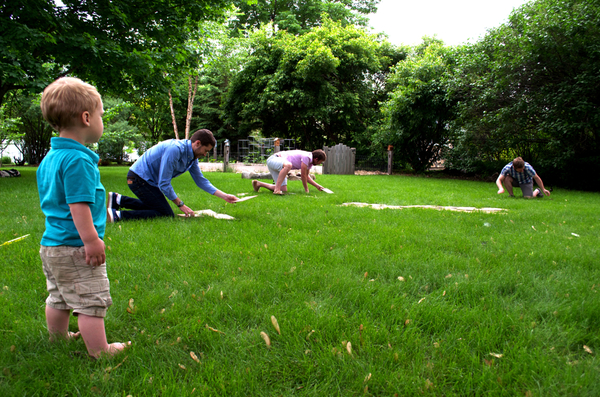 To create our lawn Bananagrams we stenciled letters onto 8×8 inch squares of hardboard that we cut from two 4×8 foot sheets. Here's a great how-to that includes all the information about the number of letters you need. For the complete rules, head to the Bananagrams site. 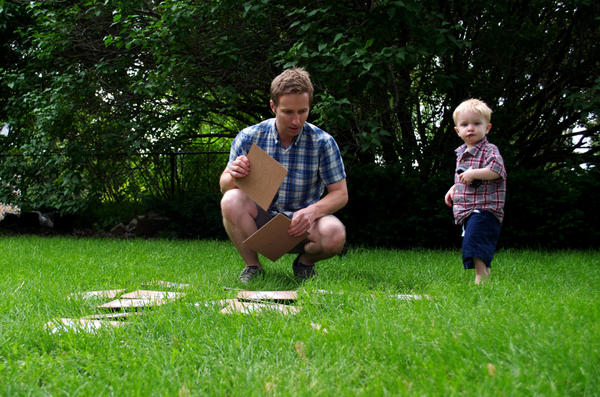 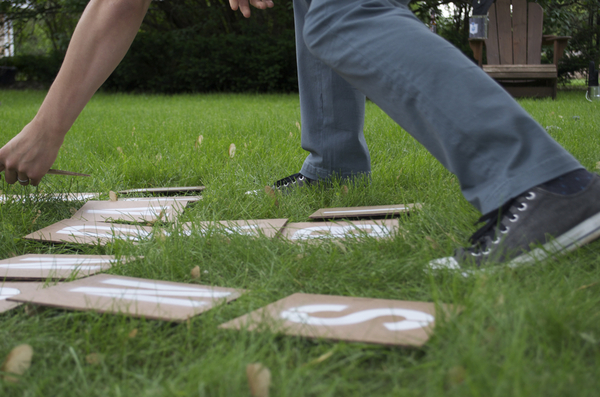 Since we had a number of children at our party, we wanted to make sure there were some activities to keep them occupied (so dads could relax and enjoy). We created a giant teepee using PVC piping (6 – 10 foot tubes), a giant 12×9 foot canvas drop cloth, and colorful rope. We followed this simple, new-sew tutorial. The kids loved having their own nook, and it got pretty crowded in there. 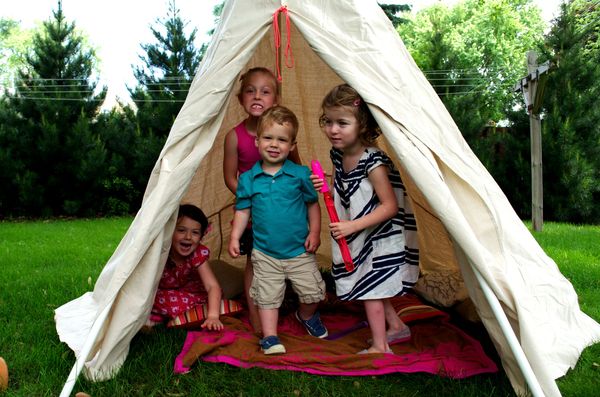 We also got a bunch of bubble wands from the dollar section at our grocery store for the kids to play with. Adults couldn't resist though: 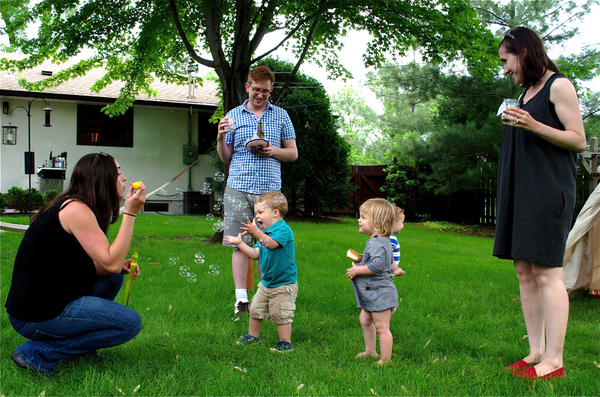 No party is complete without favors, and we decided to send our dads off with paint cans full of manly goodies. 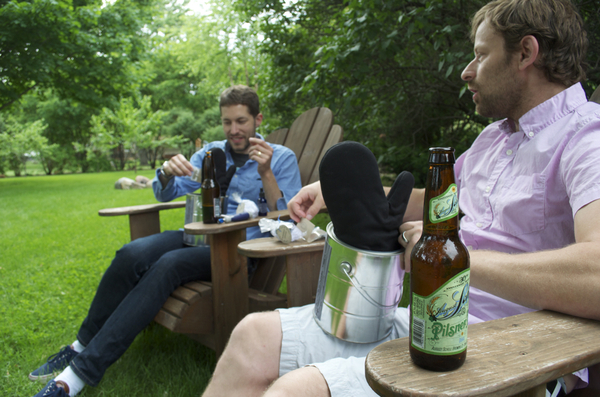 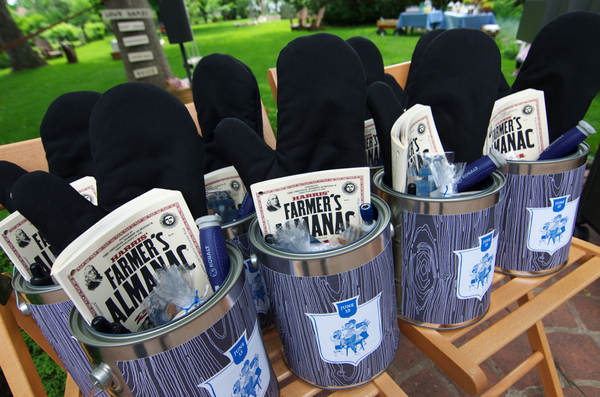 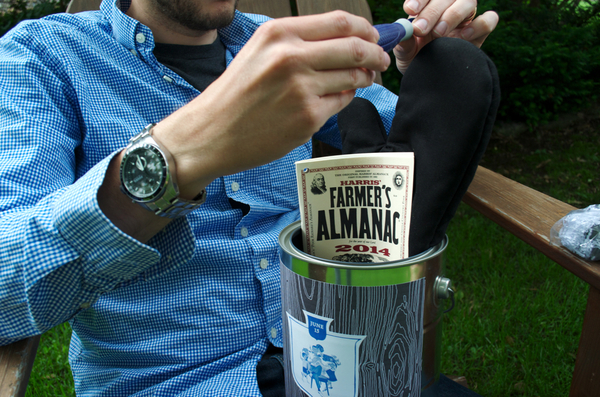 Here's what we included:

We packaged the goods in empty paint cans, and created vintage inspired labels to adorn them. They were a big hit. Here's what you need to package up the gift baskets:

Below is a download of all the label templates in PDF format (and included as *.studio files for those of you with a Silhouette), as well as printable checklists to keep your party stress-free and on-track: 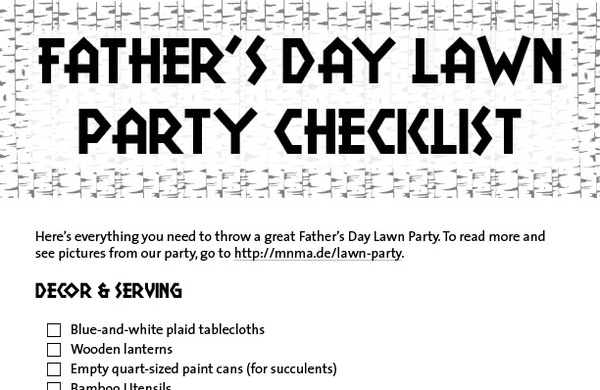 Download the PDF here, and a ZIP file with the Silhouette files here.

In the end, our Father's Day lawn party was simple, low-key, and a lot of fun … I hope yours will be too. Let me know what you've got planned for Father's Day in the comments!

Thanks to Lowe's for sponsoring this post. All opinions are mine alone.

Next Post
This article may contain affiliate links and/or offers from our affiliate partners. Clicking on a link and/or completing an offer may result in a portion of proceeds from each transaction being paid to www.manmadediy.com
barbeque fathers-day grill lawn lowes party retro