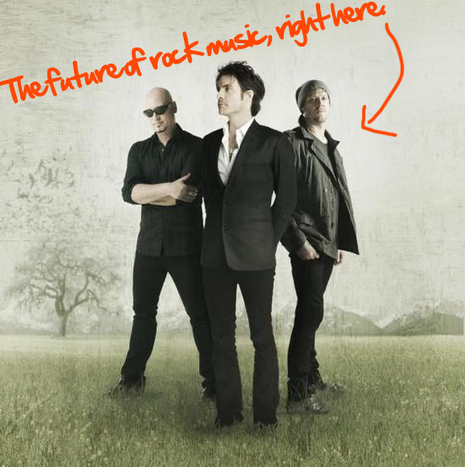 The Village Voice team have assembled their thoughts on the twenty worst songs of the year.

On top, Train’s “Hey Soul Sister” which is the only “rock” song to be on Billboard’s Top 100 list for the entire year. An excerpt of their comments,

It’s pretty much the whitest song to ever have the word “soul” in it, and that includes Death Cab’s “Soul Meets Body.” There is less soul in the entirety of Train than in the palest single member of Collective Soul. “Hey, Soul Sister” is soul for people who refer to peanut butter and jelly as “soul food.” It makes the California Raisins look like the second coming of Sly and the Family Stone…Listen to “Hey, Soul Sister” a few times and you’ll inevitably be reminded of the “whistling solo” from the Shrek house band’s inescapable “All Star.” From Smash Mouth, Train picked up an earworm that burrowed into society’s asshole, laid 4.7 million iTunes eggs, and gave birth to a grey cloud of banality that covers the Earth.

And it just gets better from there.

The Twenty Worse Songs of 2010