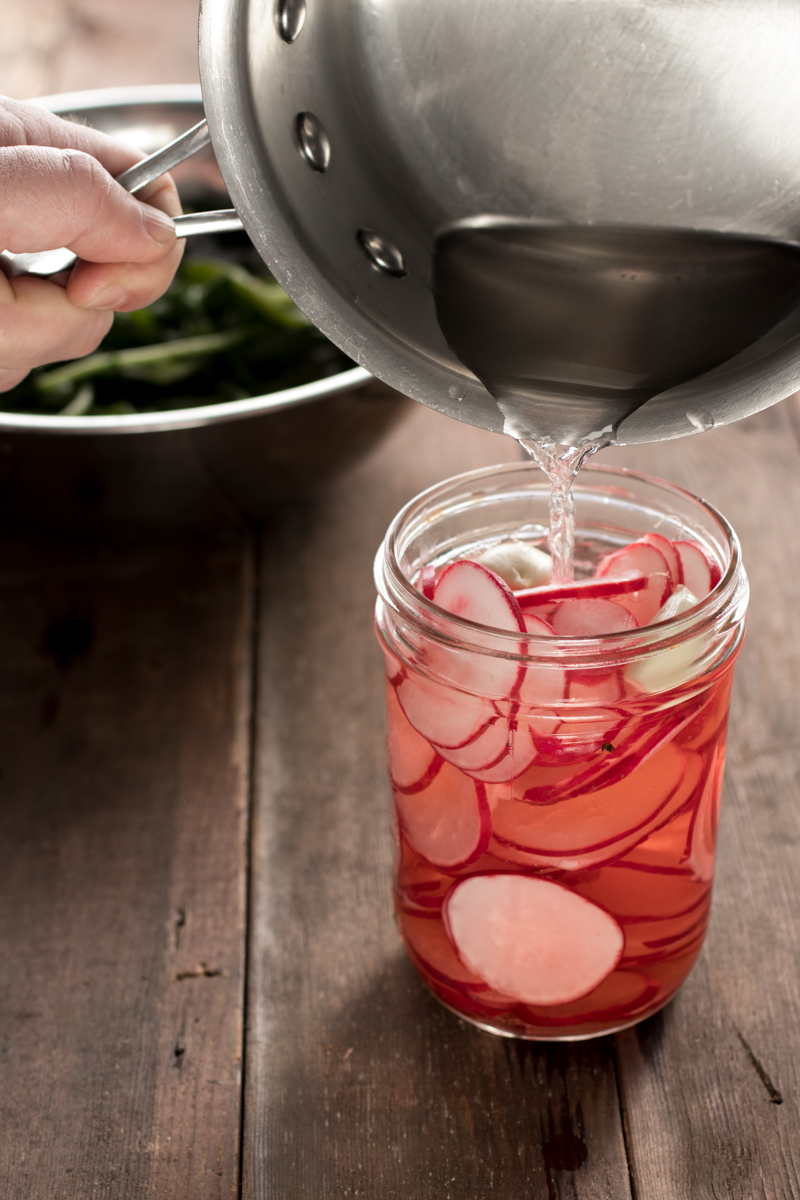 I knew I had a problem with pickles when I was a kid and the jar of Claussen's or Batampte's in our fridge wouldn't last a week without me finishing it. Something about the perfection of cucumber plus garlic plus the salty-sour of the brine made for something refreshing, savory and just perfect. I craved pickles as the accompaniment to a sandwich, but I also ate them straight out of the fridge, getting through at least a spear or two before the door closed shut. Pickles are, simply put, one of my favorite ways to eat vegetables.

In recent years, pickling has become a hipster cliché, with perhaps its most notable skewering coming in a Portlandia sketch that is, admittedly, pretty on the mark. The revival of traditional food ways and the re-introduction of naturally fermented products like kim chi, kamboucha, kvass, and kraut (just to focus on fermented “K's”) have expanded the realm of pickles and refocused fermentation enthusiasts on natural processes and the microbes that allow them to take place. Natural fermented pickles are marvels of nature, and their capacity to preserve foods and convey flavors is nothing short of miraculous. But the garlicky 'cukes I loved as a kid weren't naturally fermented. They were something a little less involved, and a little more fresh, but just as delicious––they were fridge pickles. 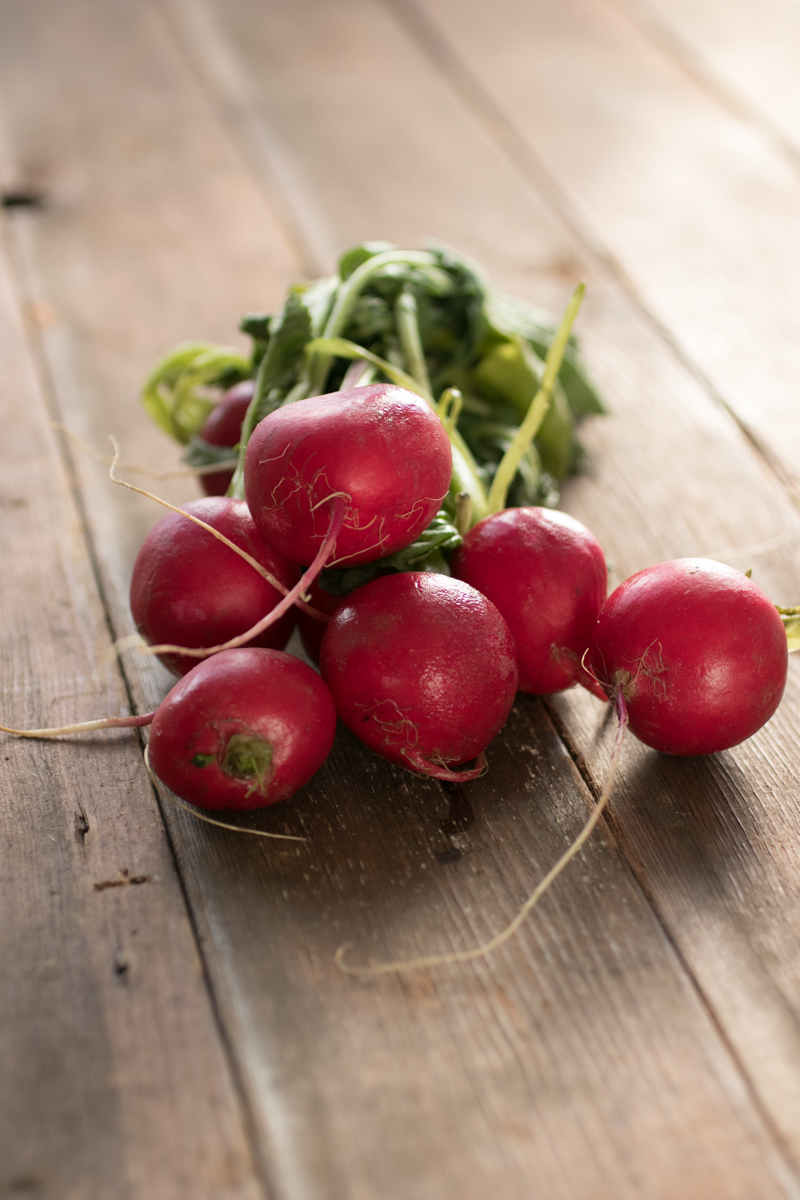 Fridge pickles are less finicky than naturally fermented ones, and they are also, to my mind, much more dynamic as a pickling medium. The sour you get from natural fermentation is mellow, which usually goes along with the fermented texture of cucumbers or cabbage that is usually generally soft, but with a little al dente bite on the finish. The sour you get from a fridge pickle is sharp, salty and crisp––just like the texture of the vegetables that emerge from a cold, marinate in a fermented liquid rather than being subject to the fermentation process itself. And because it is a marinade, there's is a ton of freedom to innovate with creative flavors and combinations. The last thing I want to do is affirm the superiority of one kind of pickle over another––there should always be room for more pickles. But here's why and how you should make fridge pickles a serious part of your life. 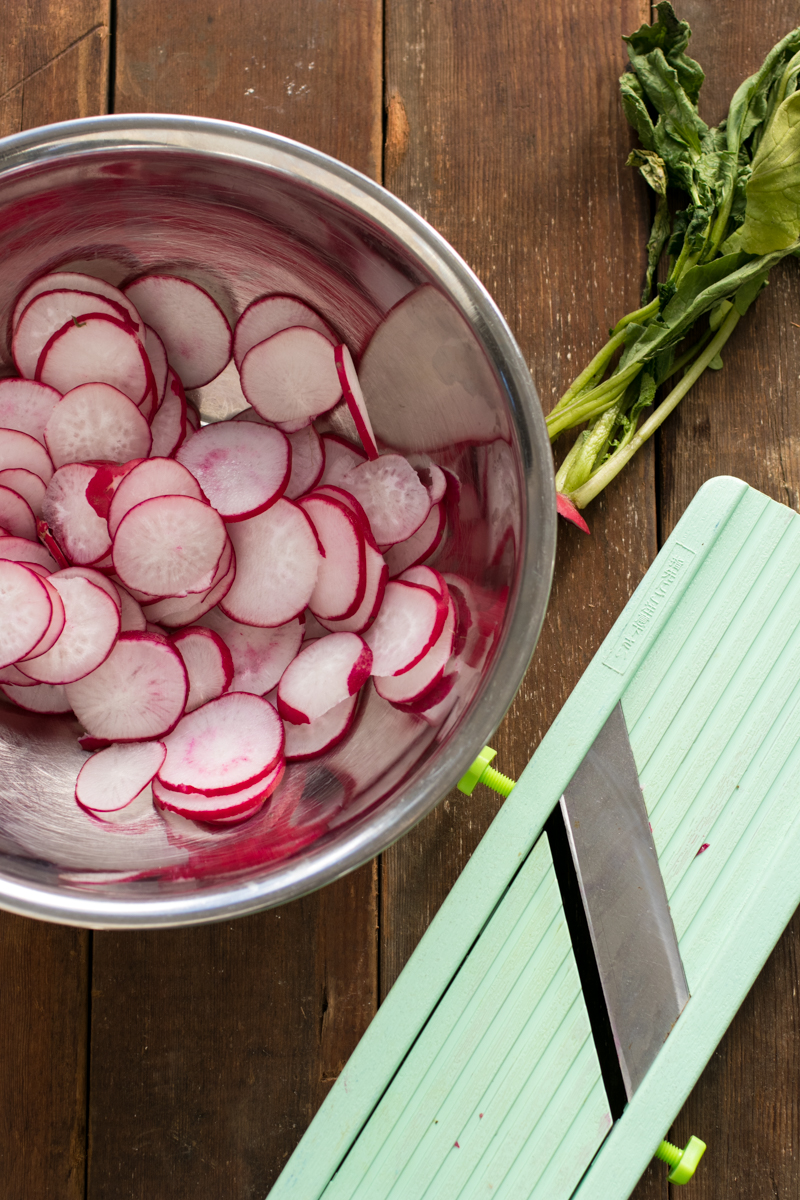 First off, making fridge pickles could not be easier. At its simplest level, these pickles are the result of soaking something plant-based in a brine for a while. (You can pickle meats and other products like cheese and eggs––but lets not get ahead of ourselves.) The brine should basically be a multiple of the following basic recipe: To 1 cup of hot-from-the-tap water add 3 tablespoons of kosher salt and 1 half-cup of vinegar (or a little less, if you prefer your pickles a little less sour)––rice wine vinegar is ideal, but if you eat pickles in the quantities I do, you may switch to distilled or apple cider vinegar to save on money. This basic brine will get you pickles in about 6-7 days.

But what is amazing about fridge pickles is that this brine immediately lends itself to adaptation and expansion. If you'd like to go with a sweet and sour pickle like a bread and butter, you'll want to add between 3-4 tablespoons of sugar and think about other additions to the brine, like some whole mustard seeds, muddled cherries and red onions. When pickling onions, garlic, or other alliums, I like to add 2-3 tablespoons of soy sauce to bump up the savory quotient. But no matter what, if your brine is salty enough and if you've added vinegar, you will be on the way to delicious, crisp pickles in  a week.

What kinds of things should you add to this brine? Basically everything that occurs to you that is vegetal. Everything that seems like an obvious candidate is game, but shockingly even things you might not expect to be a good candidate can be. Every year in the early Spring, I capitalize on the ramp season by pickling at least a pound of these amazing shoots in the soy-enriched brine, along with a squeeze or two of sriracha. To keep up my kosher dill addiction, I routinely pick up cucumbers of all varieties at markets and groceries and ply them with brine and minced garlic. 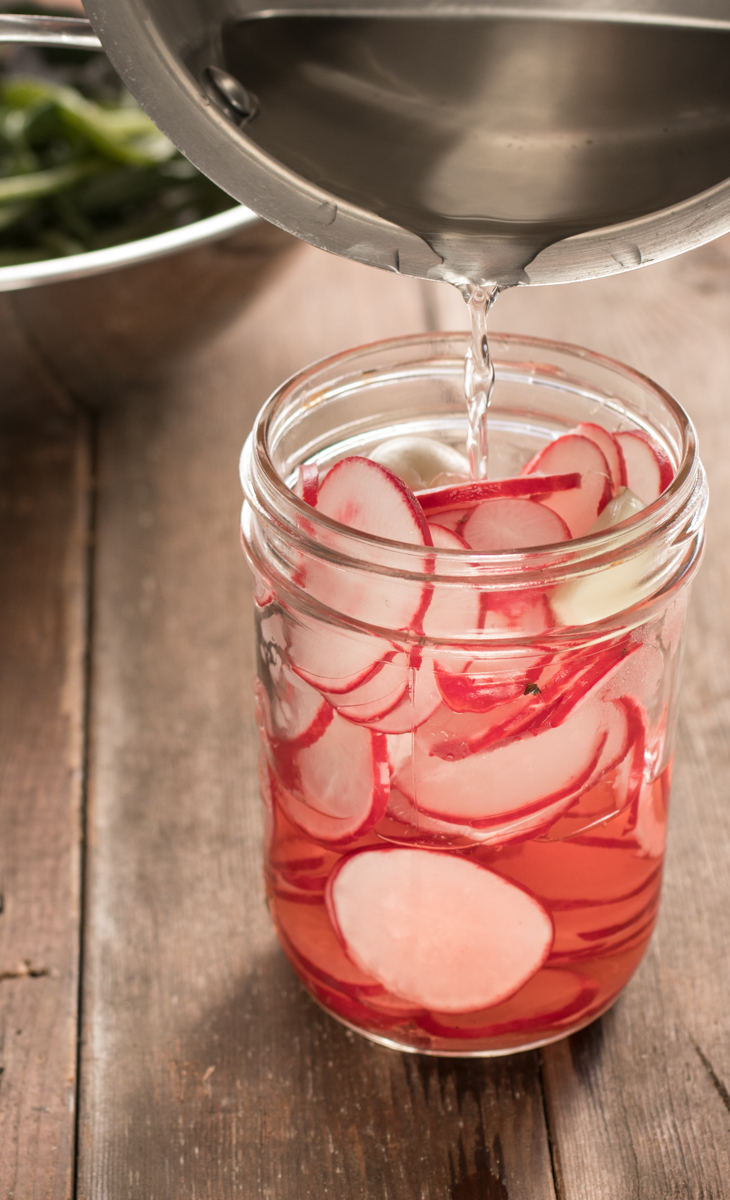 The next level with fridge pickles comes when you let loose your creativity and your appetite to make whatever sounds good. After making a few batches, it will become clear that pickles can really take on all kinds of forms and flavors. Some of the best of these come from relying on familiar flavor combinations to make something special from the basic recipe. For example, if you're sick of eating plain baby carrots, buy a bag and add them to the basic brine + sugar recipe, along with some minced tarragon. The sweet-and-sour of the brine along with the crunch of the carrot and the gentle almost licorice flavor of the tarragon perfectly combine. Once you tire of turning cauliflower into pizza dough, consider making some cauliflower pickles. Use the basic brine or the sweet-and-sour brine, but this time add a tablespoon of curry powder to make curried cauliflower pickles. 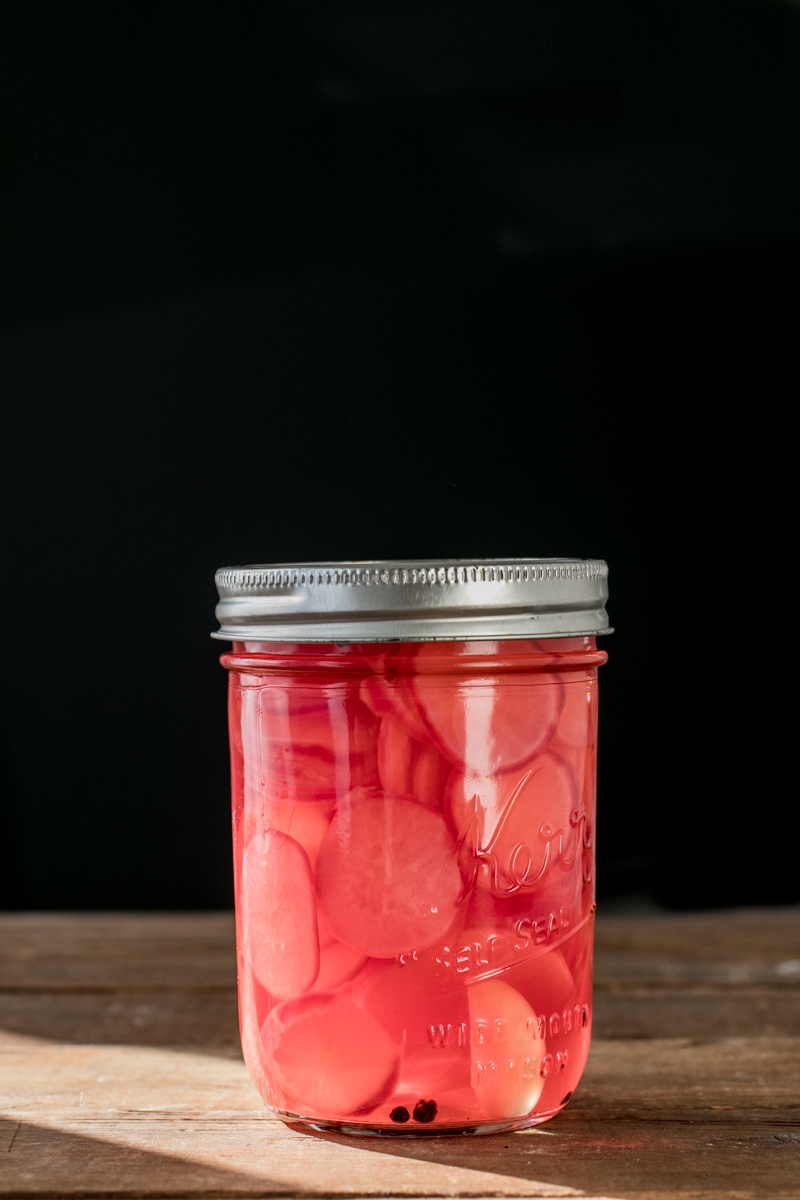 If these ideas pickle your fancy (did I get away with that?), there really is no end to the options you can pursue. One night, I was making a series of meal-sized salads that required I cut up three large heads of romaine lettuce by first cutting off the cores. I've always loved the verdant freshness that you can inhale from the trimmed cores of romaine, but that night I had a thought. Why am I throwing this away? I trimmed a very thin slice from the root end and cut off any of the greener leaves, leaving only hard, white ribs and the fibrous core. I cut this into 6 wedges, leaving me with 18 pieces that I put into a brine with garlic. In a week I had pickled lettuce that I piled on top of a roasted vegetable sandwich with goat cheese that outdid any plain leaf lettuce I've ever had. On another evening, I was grilling some fresh pineapple for a Summery dessert and was left with another core that I was accustomed to tossing. On a lark, I diced the core carefully along with some red chilis (I think they were jalapenos? this was a few years ago) and added them all to a sweet brine and created a crisp, sweet relish that––after mixing with some fresh mint––went magically with grilled pork chops. 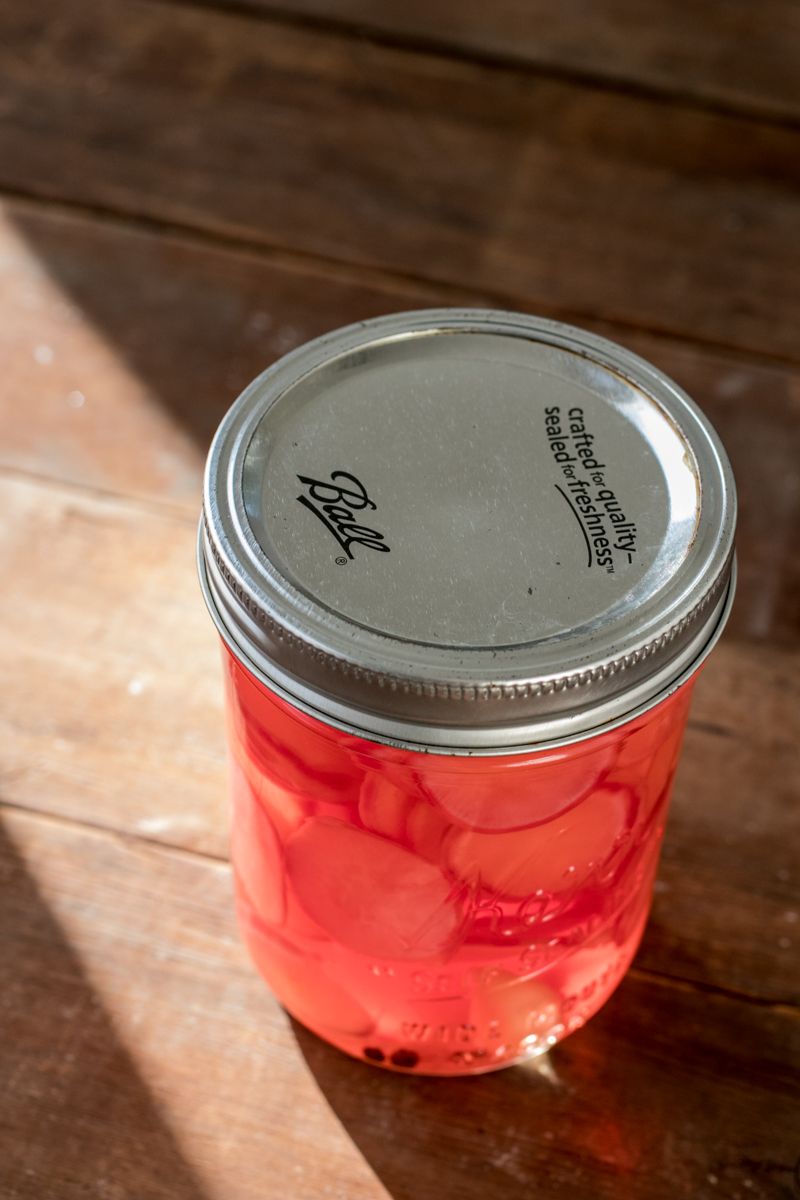 In case I haven't already convinced you, here are a few more pickles to try out and fill your fridge with.

The world of growing things is yours to brine, season, and preserve. The pickles will last in your fridge for 3 months at least. The only variable for you to worry about is time, space and raw materials. If you are a gardener or CSA subscriber, fridge pickles should be an OBVIOUS way to manage with your over abundance of raw materials. If you are a careful shopper who likes to jump on a deal, pickles can liberate your conscience about what to do when radishes are on sale for $0.79/pound. And if you are a creative tinkerer, fridge pickles allow you to experiment and bring out your creative side with minimal cooking investment. 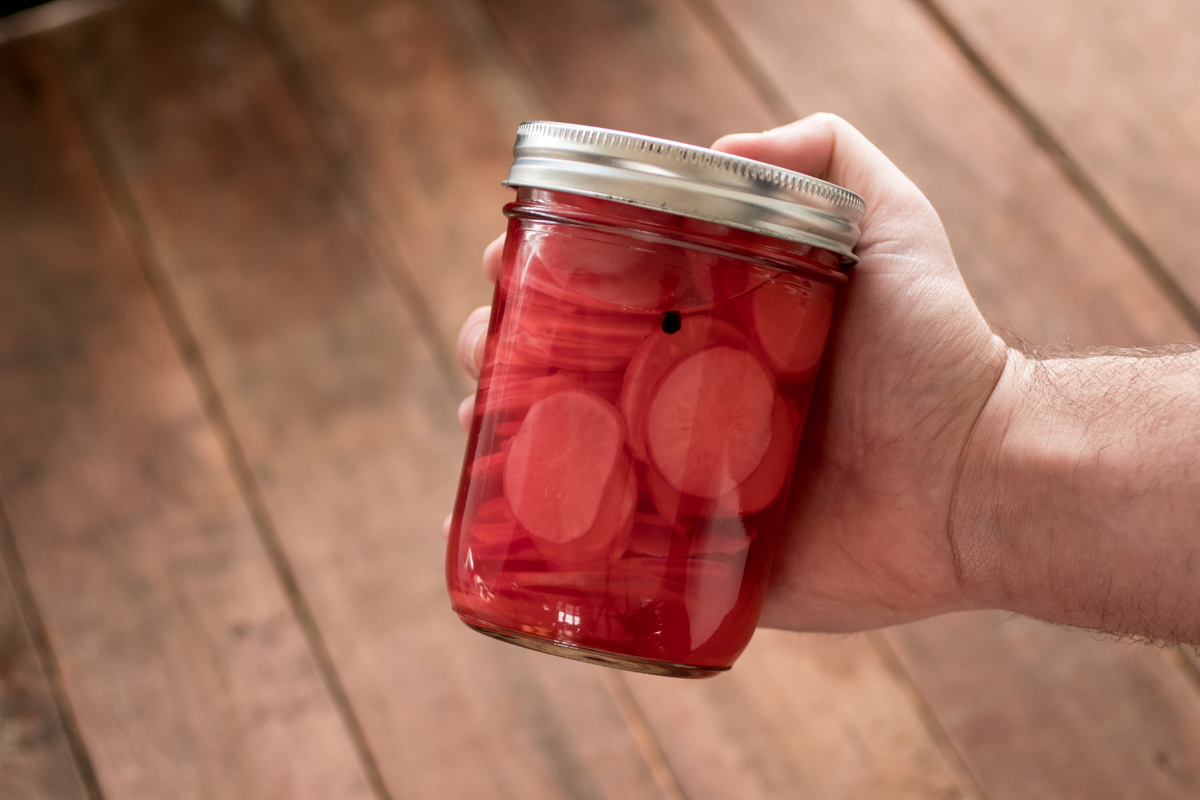