I have gone on record, in this publication and elsewhere, about why the hot toddy is the perfect cocktail to be sipping in December. It's warm. It's spiced. And at least according to folk wisdom, and able to heal a nasty wintertime sore throat, it's good for your health, and can help to heal a nasty wintertime sore throat. But, to be honest, until last Tuesday evening, I didn't actually like a hot toddy. 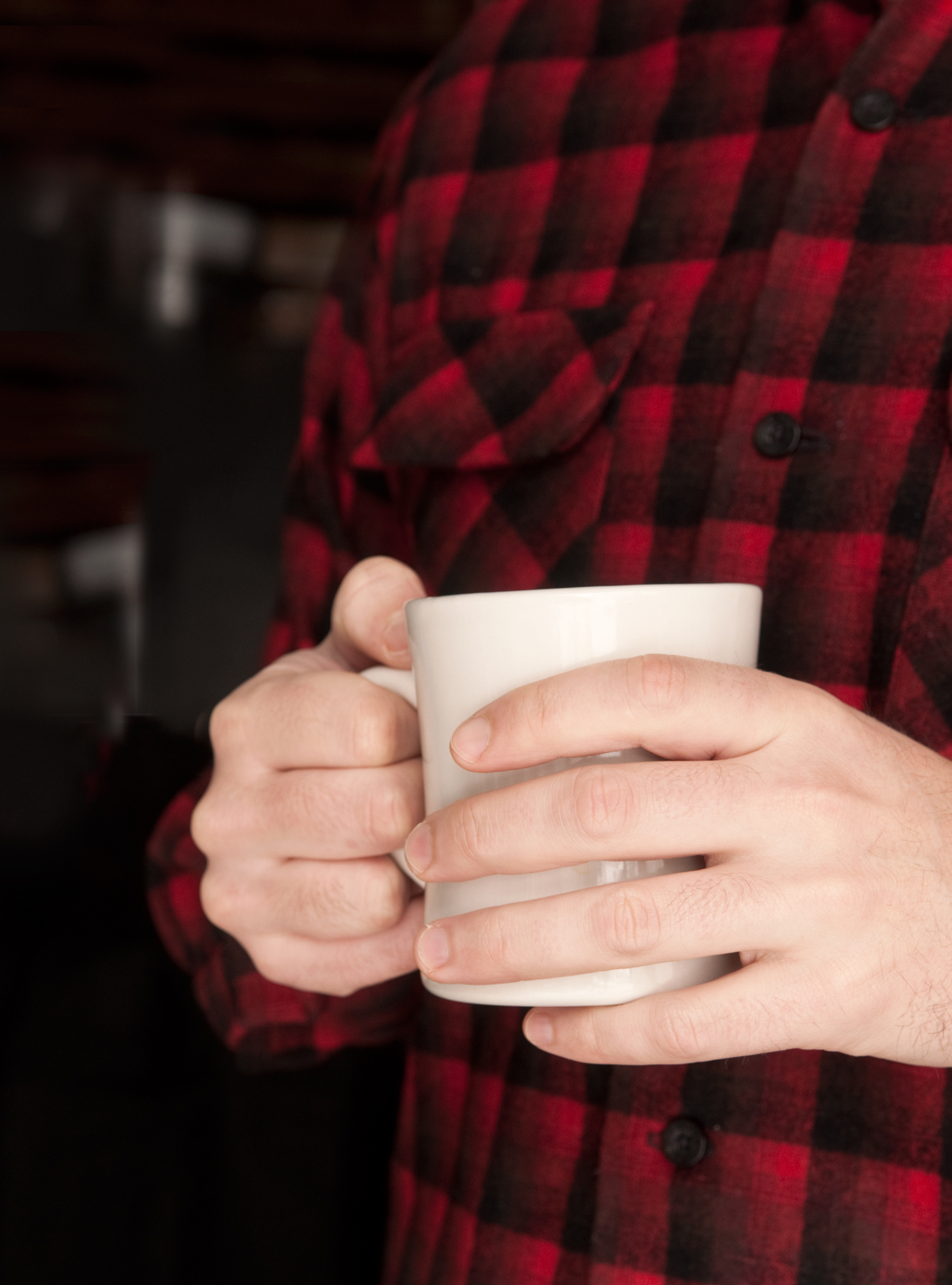 They were fine, but not delicious, and not really an improvement over a simple glass of neat whiskey.

In truth, hot toddys (toddies?) always disappointed: never quite hot enough to truly enjoy, and somewhat … harsh. There was something I never liked about adding acidic lemon juice to a healthy glug of bourbon, then heating the whole thing up. It seemed to bring out all the rough, grain-y flavors, and hid the tasty warm and spicy barrel-aged notes that make whiskey, well, whiskey.

But, one evening earlier this week, I was working late, and feeling festive and a bit cold. So I thought I'd make something hot to sip. I avoid caffeine after noon, so coffee was out. And I had already finished my daily ration of herbal tea. It was after 5:00pm, so I thought: alright, I'll try a hot toddy. Again.

But, because I still had some work to do, I didn't want to get carried away with the, uh, holiday spirit. So, I whipped one up, and cut the bourbon in half  … and that's when I heard angels sweetly singing o'er the plain.

So, though I have never done such a thing in my life, my recommendation is this: if you want to make a delicious hot toddy, cut back the alcohol.

The effect: it tastes better. And because it's simpler and more delicious, you can drink it faster. And because you can drink it faster, it stays hot. And this is the point of a toddy. Neat whiskey in a rocks glass is for sipping on for hours. A hot toddy is for holding in your hands, enjoying for five minutes, and then cuddling up with the effects of its warmth for the next half hour. Then you reboil the water, and have another. Which you can do, because it's only half a drink.

The only side effect to this method is that you drink more water, which is never bad for you, especially when enjoying spirits. And perhaps a few more calories from the extra honey, but hey – it's the holidays.

So, instead of having two strong hot toddies, have four weak ones. This is my new method, involving one mug, one lemon, and four ounces of bourbon — the equivalent of two regular sized cocktails. Except it's actually delicious, and keeps the good mood going all night long without too much comfort and joy. 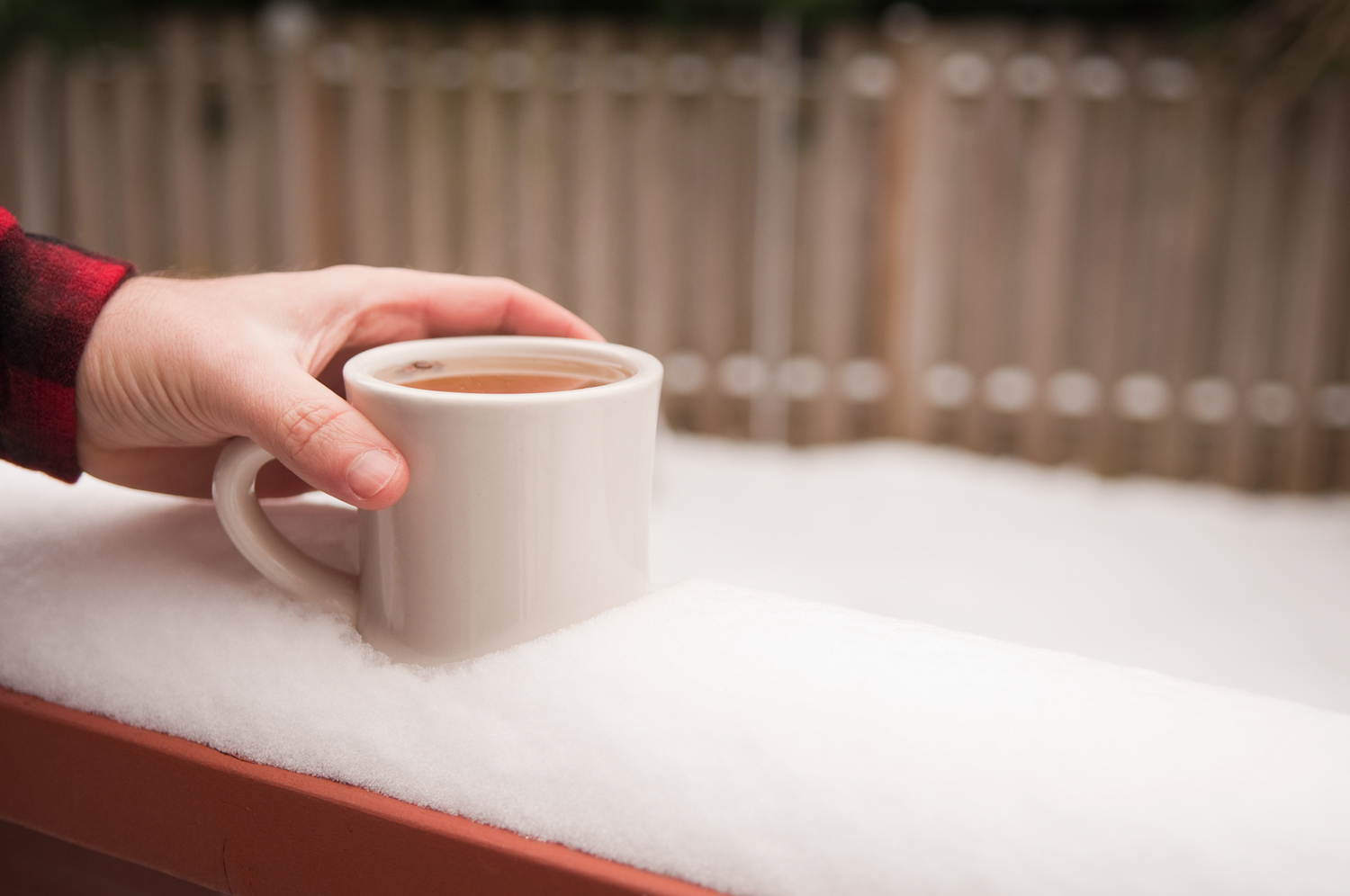 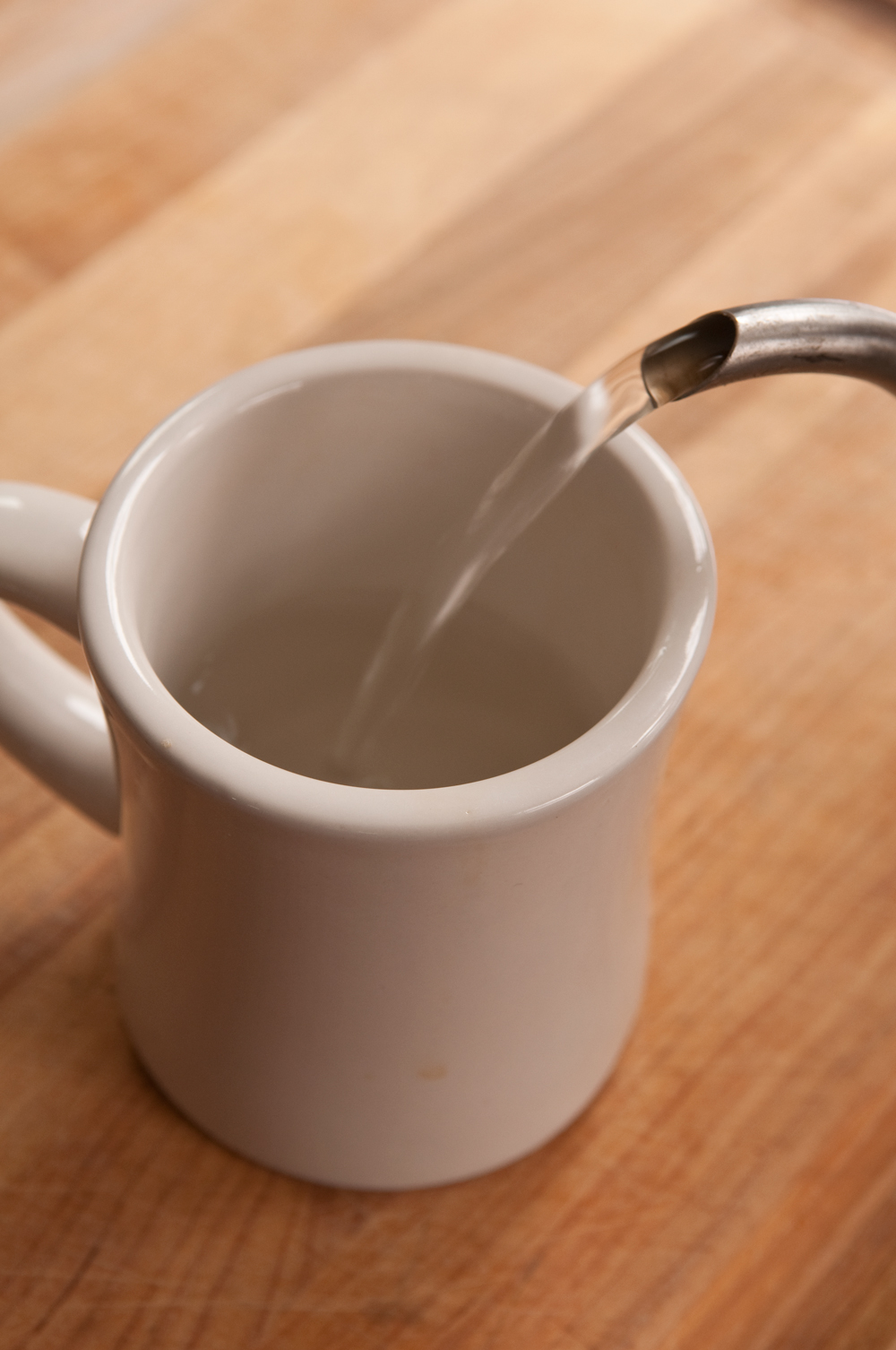 1. Boil plenty of water with a kettle or saucepan on the stove. Fill a ceramic mug with boiling water and let it preheat for 4-5 minutes while you get out the rest of the ingredients. If you don't have an electric kettle, I can't imagine a more useful kitchen item to add to your holiday wishlist. This is the one I use. $50 very well spent. 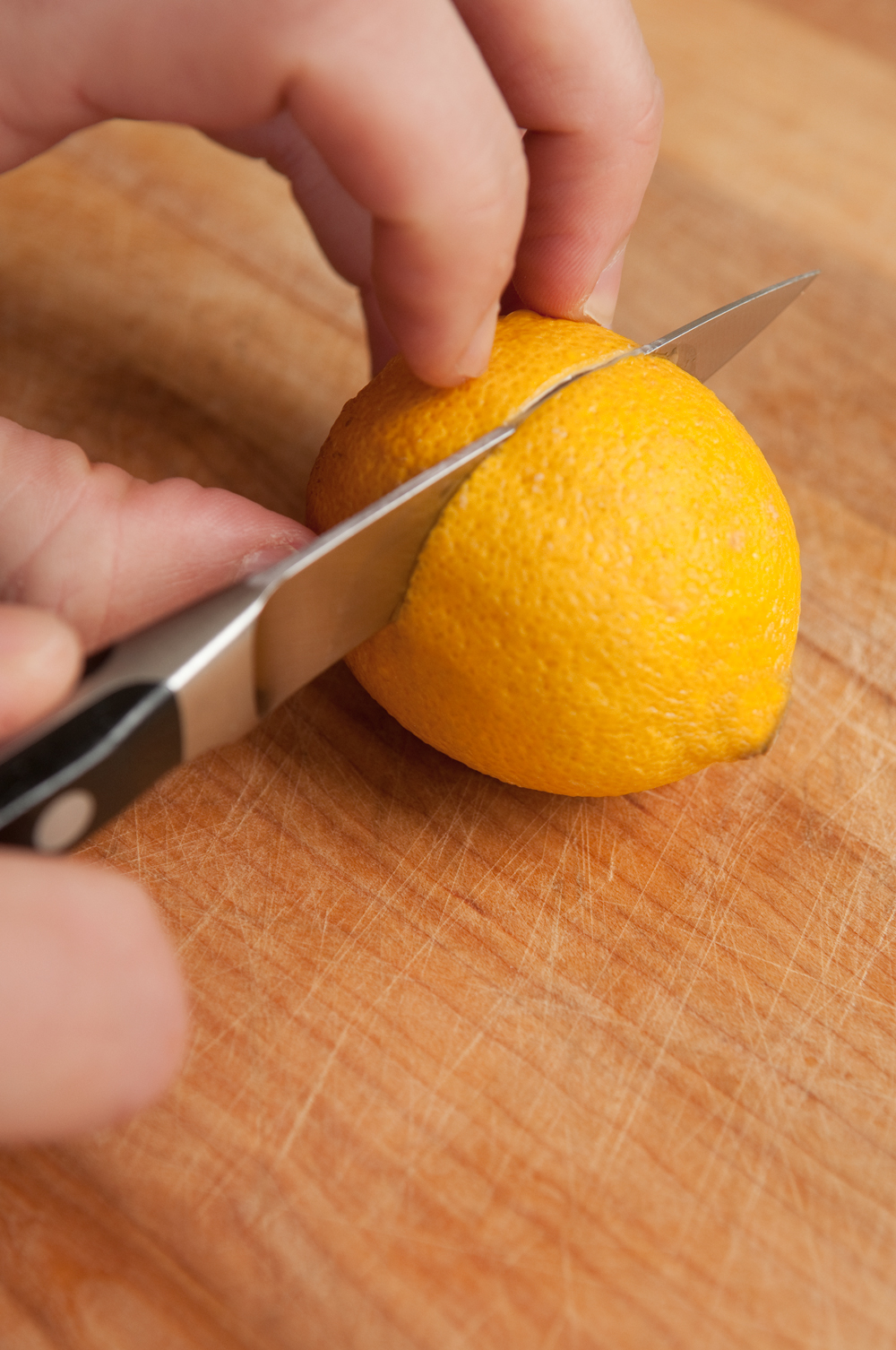 2. Take one lemon, and cut it in half. Hopefully, yours is a little fresher than this shriveled specimen I found in my fruit bowl. (It was snowing out and too blustery to ride my bike to the grocery store.) 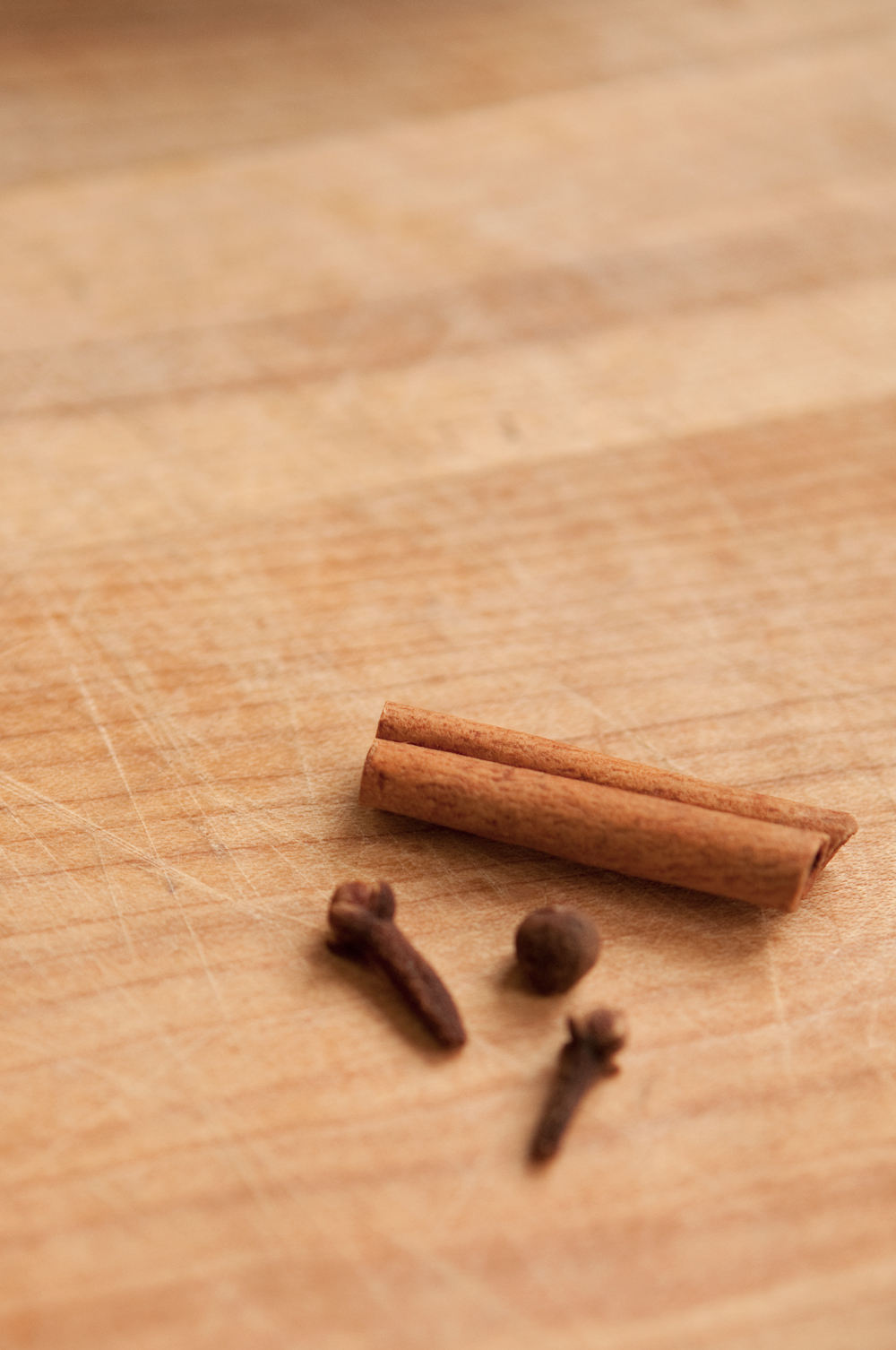 3. If you want 'em, get out some spices. I think they're worth it, but I keep these kind of things around for cooking all the time, so they're easy to grab. My recipe: 1″ piece of cinnamon stick, one whole allspice berry, two whole cloves. Grated nutmeg would also be awesome. 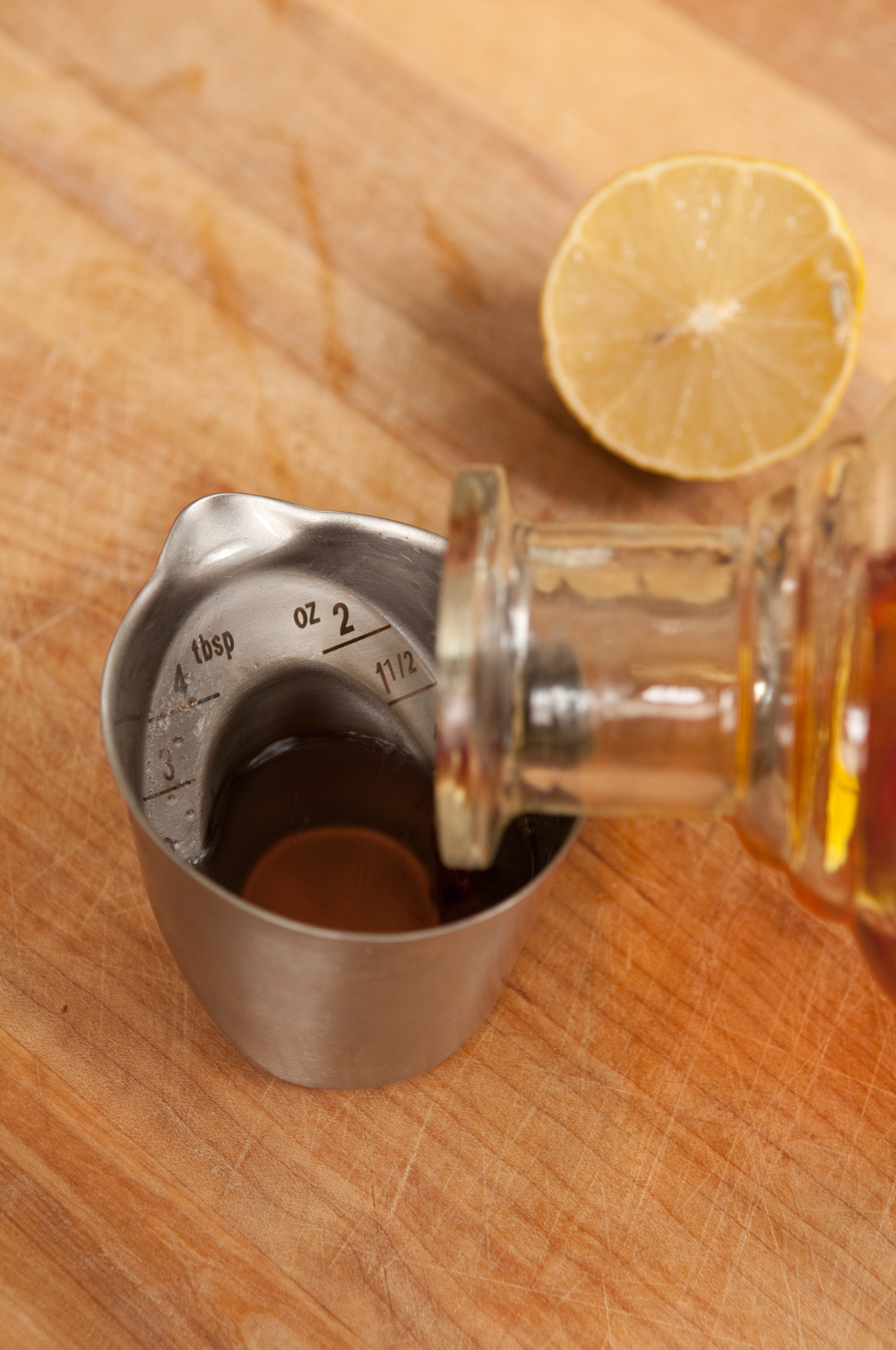 4. Measure out a mere ounce of bourbon or other whiskey. No need for single malt or top shelf stuff here. Use your everyday mixing whiskey. Other item for your wish list: Oxo Stainless Measuring Jigger. Get five of these. 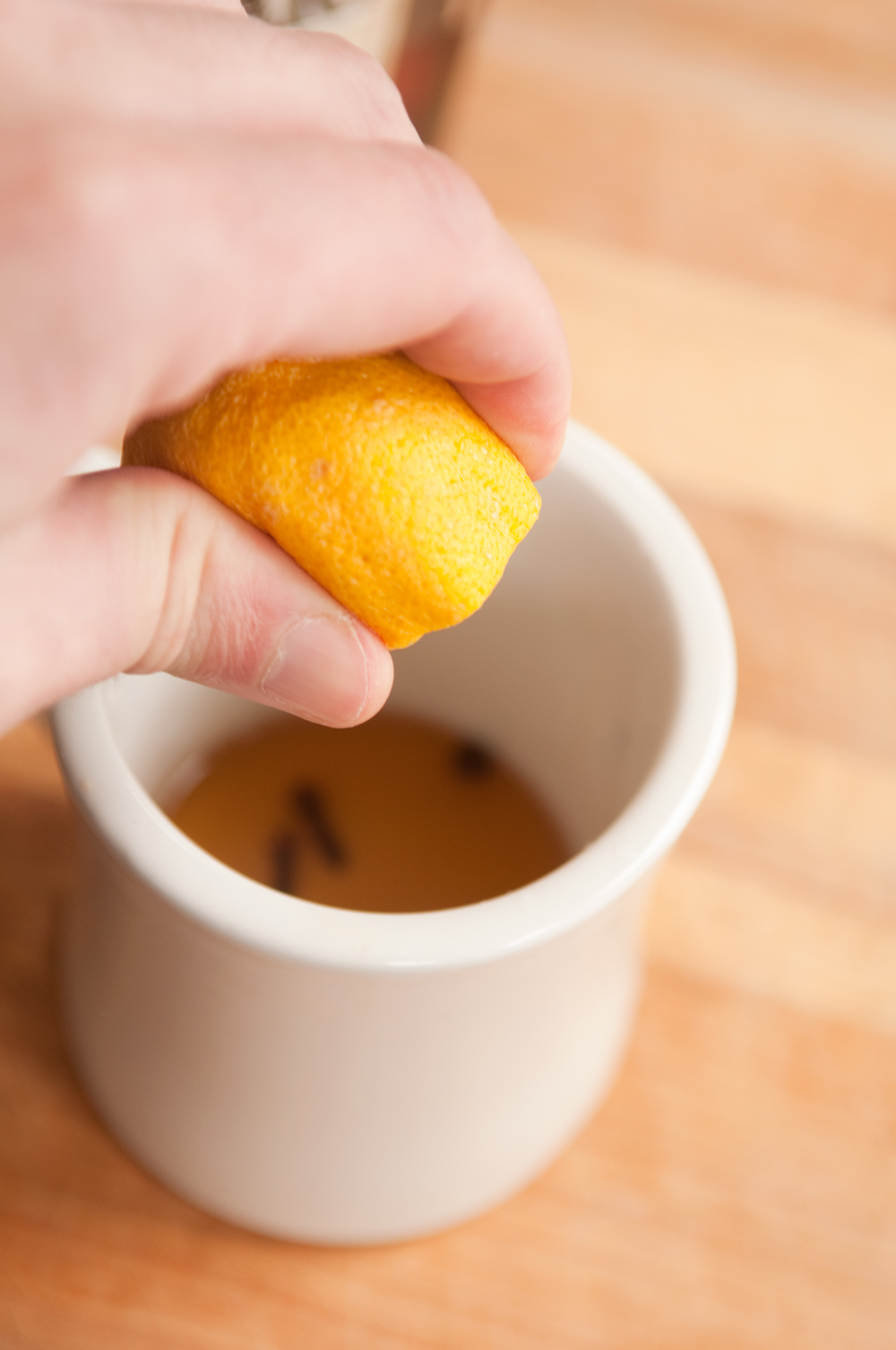 5. With your mug heated up, dump the water back in the kettle or saucepan. If necessary, bring it back to a boil. Then add the whiskey and spices to the mug, and squeeze in some lemon. Not the whole half piece; just, uh, half of the half. Which you and I and everyone over the age of nine know is a quarter, but that sounds complicated. Point is: one half lemon equals two toddies. 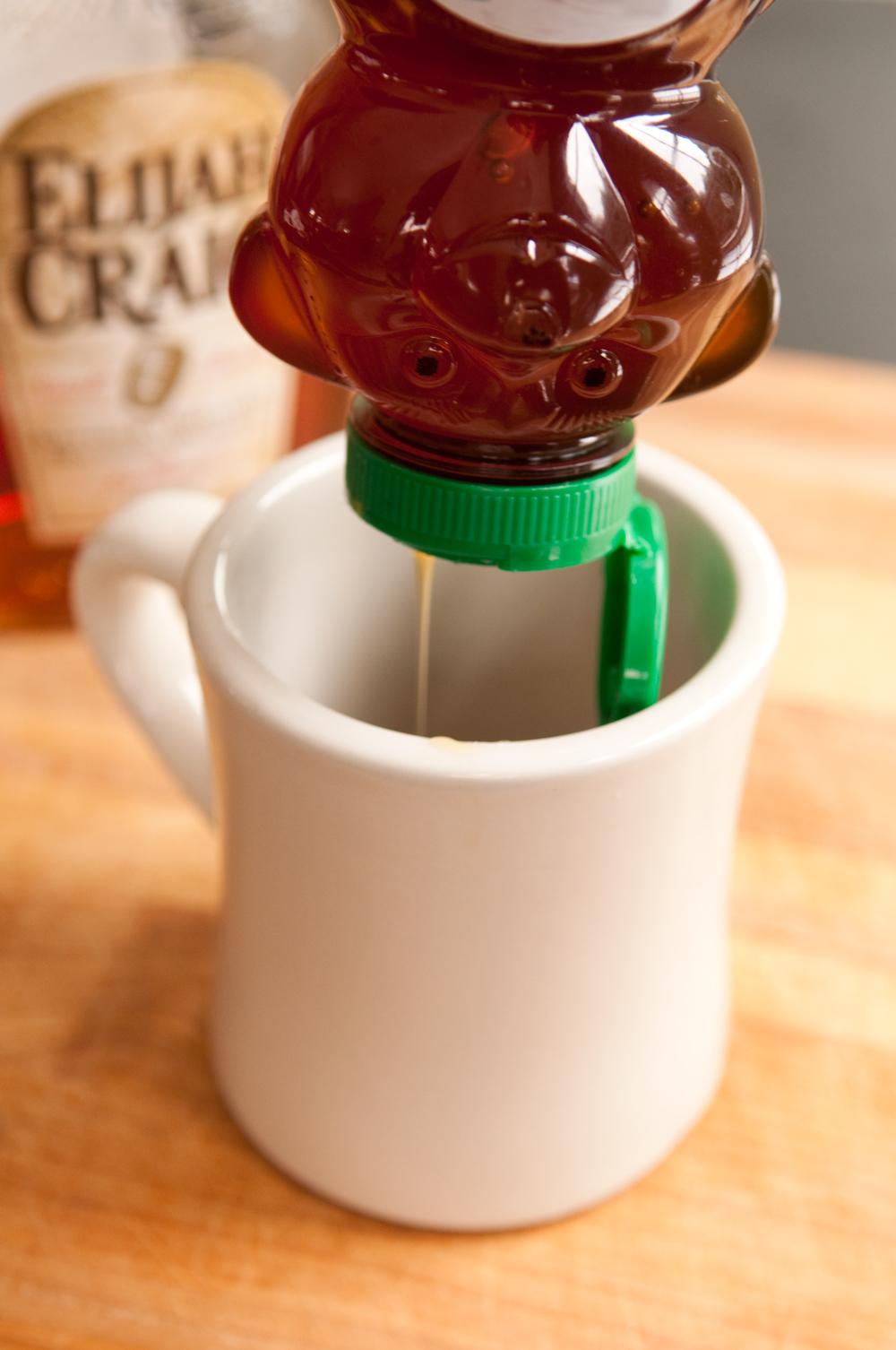 6. Squirt in some honey. Like one and a half seconds worth. Say “Jingle bells, jingle bells,” then stop. Don't measure this with teaspoons and stuff. Honey is sticky, and a pain in the butt to wash out of measuring spoons. 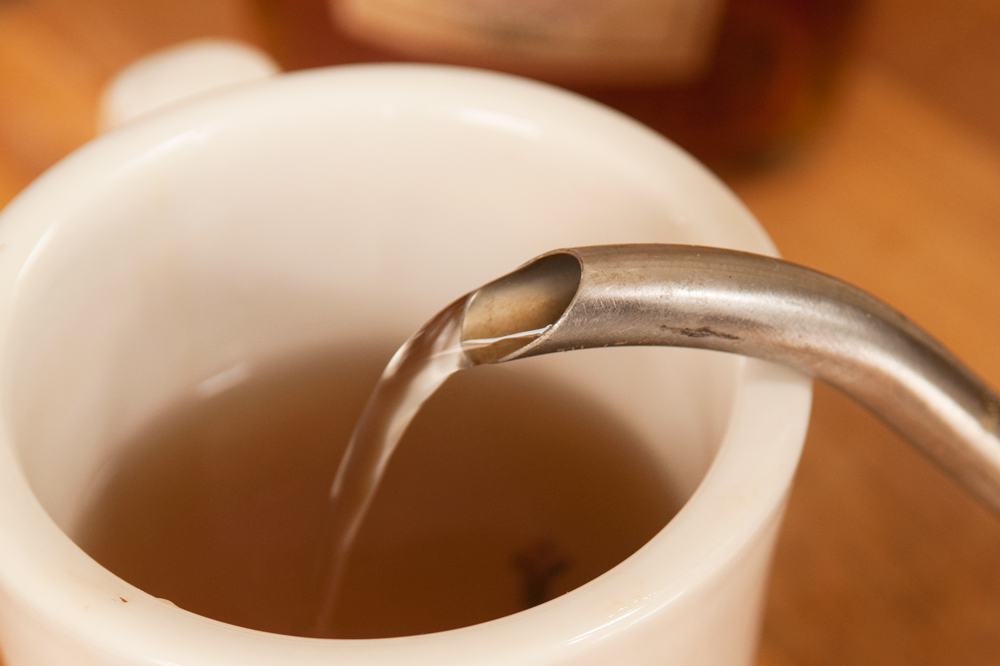 7. Fill up your mug with hot water, and stir to combine the honey with the liquid, since it will settle to the bottom. 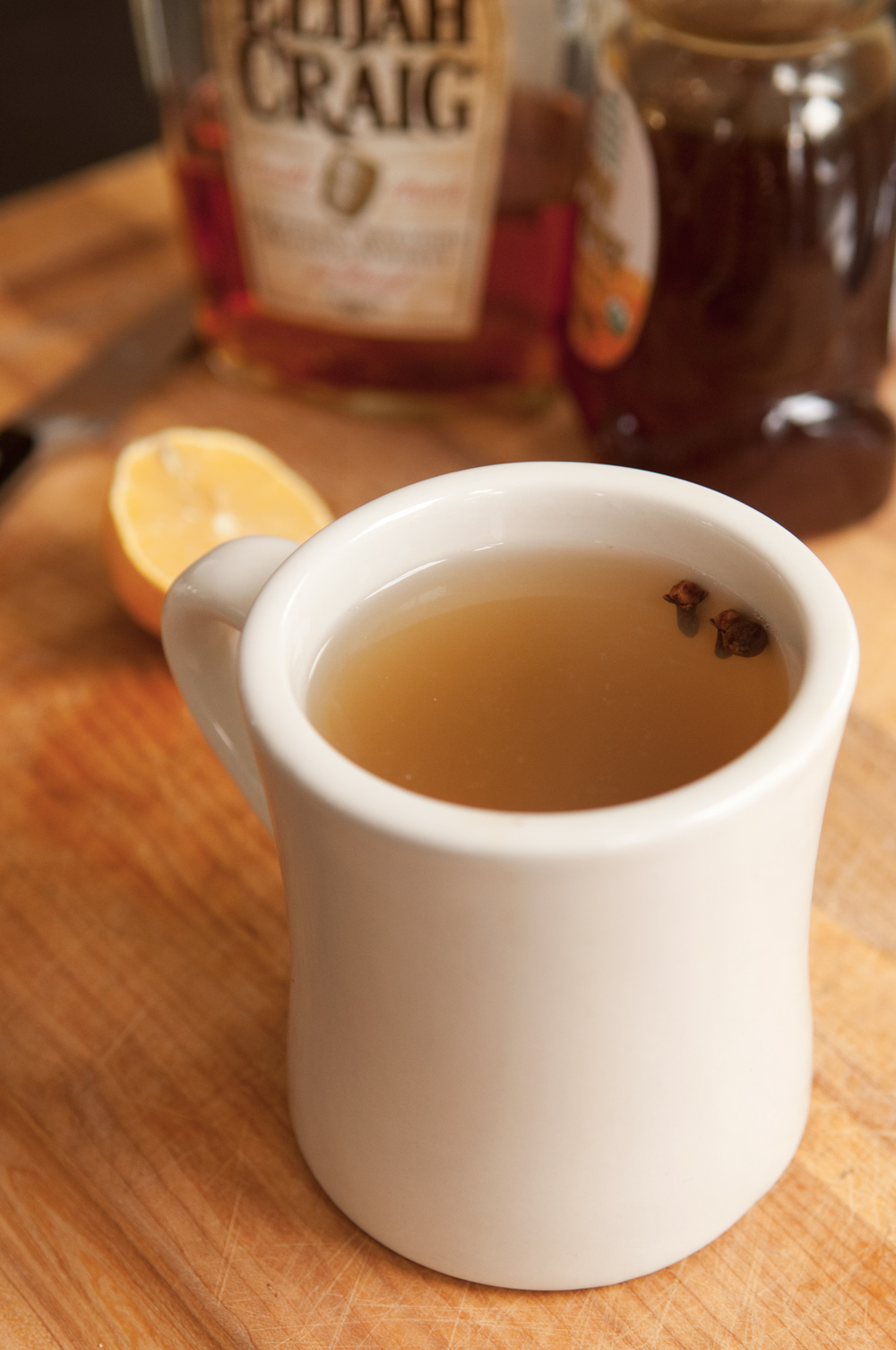 Okay, that's it. Drink it while it's hot, go wrap some presents or play a fingerstyle rendition of “Silent Night” on the guitar, then come back and make another one. Use the same mug, the same spices, and just add the rest of the lemon, etc. Done in this rhythm, you'll have had the equivalent two drinks, but actually four delicious, hot ones. And only two dishes to wash.