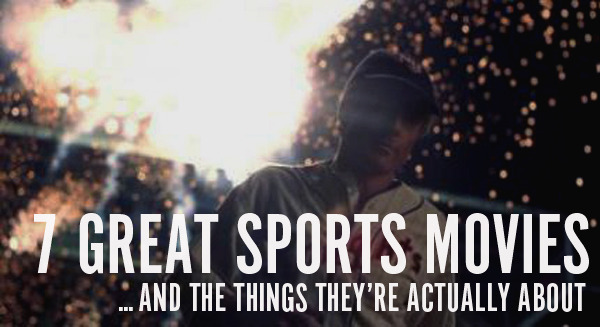 Jesus taught in parables, and Polonius advised his king “by indirections to find directions out.” One of the best things about revisiting classic sports movies as an adult is suddenly realizing all the incredible themes and lessons that were way over your head as a boy, but you likely absorbed through osmosis. Whether you’ve never seen these films or can practically do them as a one-man show, here are seven classic movies about sports that are really about something else…

“If you build it, he will come,” says a mysterious voice on the wind to Iowa farmer, Ray Kinsella (Kevin Costner). What follows is an iconic saga of family and Americana as Ray transforms his cornfield into a fully functional baseball field in the conscious hope that it’ll bring Shoeless Joe Jackson back from the dead. Under the surface though lies a heartwarming and heartbreaking tale of a modern man’s struggle to understand adulthood and connect with the dreams of his lost father and the simultaneous idealism and compromise of his father’s generation. The movie unfolds like a pastoral fable and never ceases to bring the tears a-flowin’.

Nothing pastoral here. It’s grit and racism in this small town true story of 1971 and the undefeated high school football team that fought each game to overcome the hatred surrounding their recently integrated high school. This one is pretty obviously about something besides simply winning the championship, but it set the bar for modern sports movies by overtly taking a thematic stand on something greater than football. If you were alive if 00’s, you must have seen this movie and would recognize the majority of the high school players for their now-famous careers (Ryan Gosling, Wood Harris, Donald Faison, Kate Bosworth, Hayden Panettiere).

What begins as a story about the “religion of baseball” unfolds to be a tale about manhood in this unique romantic film. Kevin Costner stars (yet again) as veteran catcher Crash Davis who’s been hired to mentor hotshot pitching prodigy Nuke LaLoosh (Tim Robbins) and help mold him into major league material. In the meantime there’s a fantastic love triangle thanks to Susan Sarandon that makes this film a great one to share with a lady. Perhaps the most memorable scene is Crash’s speech to Susan Sarandon about what he believes in (and thereby what kind of man he is), although I also think this scene is a great second place as well.

Based on Bernard Malamud’s 1952 novel (albeit with a markedly different ending), The Natural tells the romanticized tale of Roy Hobbs (Robert Redford) on his interrupted quest to become “the best there ever was.” Generally considered to be the best baseball film of all time, the film is an American tale of one man’s struggle to stay true to his dream for himself despite stacked odds and being surrounded by soul-corrupting evils. It’s exciting to watch an Hobbs’ perspective through the movie as it’s rare to see a character with such thorough self-knowledge. Also needing to be mentioned is the films spectacular cinematography (by Zooey Deschanel’s father) and an Aaron Copland-esque score by Randy Newman. I envy people who get to see this movie for the first time for all of its feel-good sports moments.

[N.B. I’m a firm believer in viewing the original cut of the film since the Director’s Cut includes flashbacks/forwards that take away from the power of one of the film’s most jarring and shocking scenes. Trust me.]

Rudy tells the true story of Daniel “Rudy” Ruettiger, a hopelessly small and talentless young man who dreams of playing football for Notre Dame. Throughout the film you watch Rudy face setback after setback, as he struggles to keep the faith alive to achieve the impossible for himself. Aside from stirring montages and one of the most emotionally fulfilling third act payoffs, one of the best scenes features this confrontational speech from Rudy’s janitorial boss played by Charles S. Dutton.

In contrast to Rudy’s moral of perseverance, Rocky is much more about resilience – simply working hard enough and having enough guts to stand tall at the end of a truly impossible fight. When a down-and-out nobody is given an impossible shot at the boxing heavyweight championship of the world, Rocky Balboa knows he doesn’t stand a chance. Nevertheless, he brings the heart one could hope for in this stirring story of resilience.  It takes guts to make a film in which the hero doesn’t win, and it’s all the more charming when you know that Sylvester Stallone wrote this Best Picture winner that later spawned 5 sequels with a new spinoff just about to begin production.

It’s been said that there are only two types of stories in the world: a hero goes on a journey, and a stranger comes to town. I can’t think of a more emblematic film for the latter sentiment than David Anspaugh’s 1988 film Hoosiers. Everything changes for the lone town of Hickory, Indiana when a blunt coach (the stellar Gene Hackman) with a mysterious past tries to lead the high school team to the state finals in 1954. The tale (loosely based on a true story) tells an uplifting story exemplifying the importance of fundamentals in everything while also asking important questions about manhood. Can you escape your past? Can a lost man be redeemed? How much good can a flawed man still do? Not to be missed is one of the all time best performances by Dennis Hopper as the town drunk and father of one of the starting players.

[I’ve now wasted so much time re-watching clips from every film for this article. I regret nothing.]