For the last couple years, I’ve had a framed tattered page I tore out from an old book of poetry (pictured below) that I picked up at a garage sale in Minnesota when I was a boy. I’ve taken it with me wherever I’ve moved, usually displaying it on my desk, although occasionally on a shelf or bedside table. The poem is titled SEA-FEVER and came from a poetry collection called Salt-Water Poems and Ballads by John Masefield, first published in 1902. 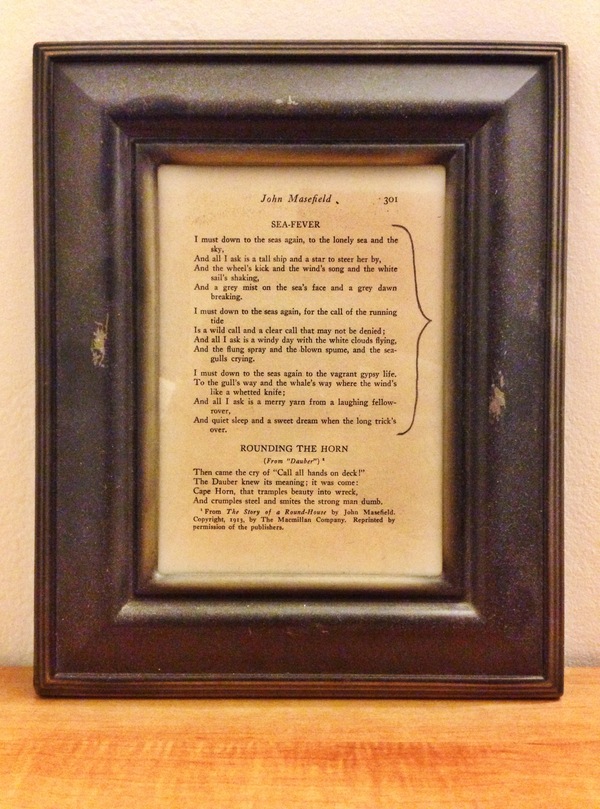 The poem expresses the yearning for the grey seas from the perspective of a presumably landlocked rover, and was one of my initial inspirations for rafting the Mississippi River. 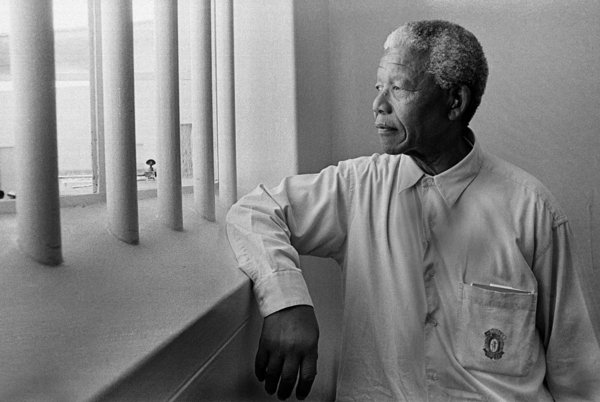 Next up is INVICTUS (Latin for “unconquered), a short Victorian poem written by the English poet William Ernest Henley in 1875 and publish in 1888. A poem about the indomitable spirit of humankind, it has served as a comfort for great men throughout history, most notably Nelson Mandela during his 27 year incarceration in the Robben Island prison. Ironically, the poem was composed from an infirmary while Henley was recovering from a recent leg amputation…

Out of the night that covers me,
Black as the pit from pole to pole,
I thank whatever gods may be
For my unconquerable soul.
In the fell clutch of circumstance
I have not winced nor cried aloud.
Under the bludgeonings of chance
My head is bloody, but unbowed.
Beyond this place of wrath and tears
Looms but the Horror of the shade,
And yet the menace of the years
Finds and shall find me unafraid.
It matters not how strait the gate,
How charged with punishments the scroll,
I am the master of my fate,
I am the captain of my soul. 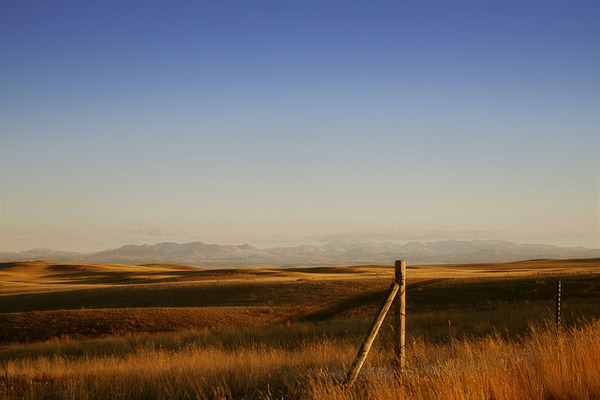 PIONEERS! O PIONEERS is Walt Whitman’s great ode to the swelling spirit of those who set out in search of a better life throughout the history of western expansion. Originally published in Leaves of Grass in 1865, the poem stresses perseverance, determination, and the strength of youth carving its own path in the face of elderly wisdom. Here are the first six stanzas.

COME, my tan-faced children,
Follow well in order, get your weapons ready;
Have you your pistols? have you your sharp edged axes? Pioneers! O pioneers!

For we cannot tarry here,
We must march my darlings, we must bear the brunt of danger, 5
We, the youthful sinewy races, all the rest on us depend, Pioneers! O pioneers!

Have the elder races halted?
Do they droop and end their lesson, wearied, over there beyond the seas?
We take up the task eternal, and the burden, and the lesson, Pioneers! O pioneers!

All the past we leave behind;
We debouch upon a newer, mightier world, varied world,
Fresh and strong the world we seize, world of labor and the march, Pioneers! O pioneers!

We detachments steady throwing,
Down the edges, through the passes, up the mountains steep,
Conquering, holding, daring, venturing, as we go, the unknown ways, Pioneers! O pioneers!

A series of epic Levi’s ads (directed by True Detective’s Cary Fukunaga) featured excerpts of the poem, and you can also hear the entire poem performed by Will Greer here.

ODE (commonly remembered as WE ARE THE MUSIC MAKERS) is a poem written by English poet Arthur O’Shaughnessy and published in 1873. ODE is an elegiac tale one might tell oneself in the quietness between creative projects. The poem has nine stanzas all together, however the opening three are often the only ones remembered. I used to recite the first two stanzas to myself before going onstage each night, when I performed The Cherry Orchard in NYC and it’s one that I still love having with me. Also, the poem holds the origin of the phrase, “movers and shakers.” And Willy Wonka quotes the opening lines in the 1971 film…so, points there.

WE are the music-makers,
And we are the dreamers of dreams,
Wandering by lone sea-breakers,
And sitting by desolate streams;
World-losers and world-forsakers,
On whom the pale moon gleams:
Yet we are the movers and shakers
Of the world for ever, it seems.

With wonderful deathless ditties
We build up the world’s great cities,
And out of a fabulous story
We fashion an empire’s glory:
One man with a dream, at pleasure,
Shall go forth and conquer a crown;
And three with a new song’s measure
Can trample an empire down.

We, in the ages lying
In the buried past of the earth,
Built Nineveh with our sighing,
And Babel itself with our mirth;
And o’erthrew them with prophesying
To the old of the new world’s worth;
For each age is a dream that is dying,
Or one that is coming to birth. 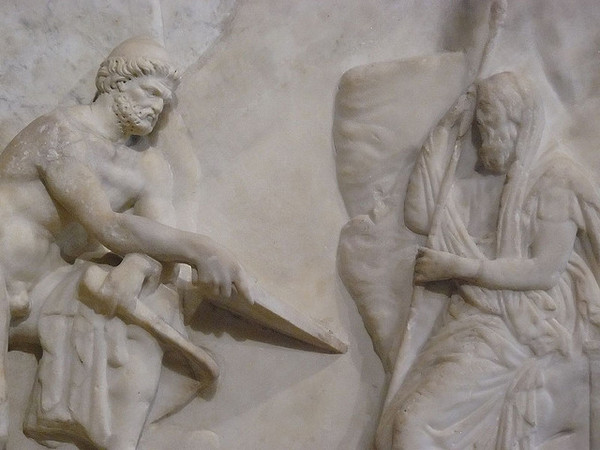 ULYSSES is one of my all-time favorite poems and one that I almost accidentally committed to memory simply by reading it so many times. Written from the perspective of the famously harried Ulysses (Latin for the Greek hero, Odysseus), the poem was hailed by T. S. Elliot as “a perfect poem.” At once contemplative and restless, the poem takes the form of a blank verse dramatic monologue as the man of constant sorrow seeks to reconcile the conflicting aspects of his aspirational personality. It’s SO GOOD. Written by Alfred Lord Tennyson in 1833 and published in 1842, the poem has had a lasting impact on pop culture and was featured in both the Dead Poet’s Society and in this epic sequence of James Bond running from 2012’s Skyfall.

This is the first section:

It little profits that an idle king,
By this still hearth, among these barren crags,
Match’d with an aged wife, I mete and dole
Unequal laws unto a savage race,
That hoard, and sleep, and feed, and know not me.
I cannot rest from travel: I will drink
Life to the lees: All times I have enjoy’d
Greatly, have suffer’d greatly, both with those
That loved me, and alone, on shore, and when
Thro’ scudding drifts the rainy Hyades
Vext the dim sea: I am become a name;
For always roaming with a hungry heart
Much have I seen and known; cities of men
And manners, climates, councils, governments,
Myself not least, but honour’d of them all;
And drunk delight of battle with my peers,
Far on the ringing plains of windy Troy.
I am a part of all that I have met;
Yet all experience is an arch wherethro’
Gleams that untravell’d world whose margin fades
For ever and forever when I move.
How dull it is to pause, to make an end,
To rust unburnish’d, not to shine in use!
As tho’ to breathe were life! Life piled on life
Were all too little, and of one to me
Little remains: but every hour is saved
From that eternal silence, something more,
A bringer of new things; and vile it were
For some three suns to store and hoard myself,
And this gray spirit yearning in desire
To follow knowledge like a sinking star,
Beyond the utmost bound of human thought. 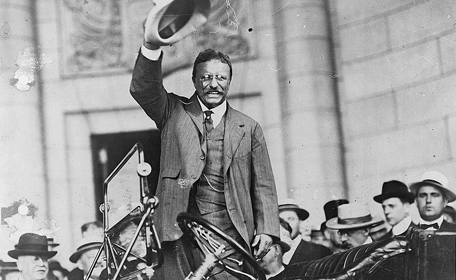 Honorable Mention: THE MAN IN THE ARENA

This isn’t a poem, per se, but still a masculine passage that has served me manyfold as a result of of committing it to memory. It’s often referred to as “The Man in The Area” and is taken from Theodore Roosevelt’s 1910 speech at the Sorbonne in Paris titled, “Citizenship in a Republic.” The sentiment is one that he expressed a many different ways throughout his life, even repeating the metaphor in numerous ways, yet it is best expressed in the passage reproduced below:

“It is not the critic who counts; not the man who points out how the strong man stumbles, or where the doer of deeds could have done them better. The credit belongs to the man who is actually in the arena, whose face is marred by dust and sweat and blood; who strives valiantly; who errs, who comes short again and again, because there is no effort without error and shortcoming; but who does actually strive to do the deeds; who knows great enthusiasms, the great devotions; who spends himself in a worthy cause; who at the best knows in the end the triumph of high achievement, and who at the worst, if he fails, at least fails while daring greatly, so that his place shall never be with those cold and timid souls who neither know victory nor defeat.”

This ManMade post was originally published in December 2013. We’re re-sharing it because poetry is still awesome.