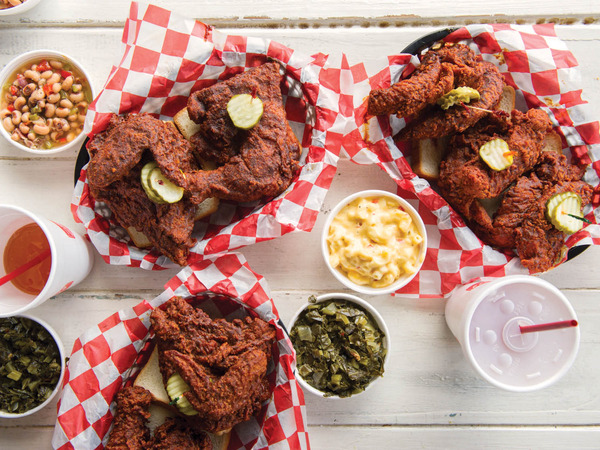 To my mind, the hot chicken tradition of Nashville, TN is among the most amazing regional food traditions for three reasons: 1) it’s amazingly local, native to a few neighborhoods in a single city, rather than a general area 2) it’s amazingly (yet justifiably) spicy, and 3) the recipes have been amazingly secretive.

Moreover, it’s incredibly, incredibly delicious, and I’ve never had anything like it.   If you’re not familiar, hot chicken tends to consist of a brined-then-fried chicken quarter – light or dark meat – which is then brushed, post-fry, with a fiery paste of cayenne pepper and lard, then served with two pickles on top of piece of white bread, which soaks up all the amazing drippings.

You can sometimes find it outside of Nashville – my own city offers it via food cart – but its a technique and recipe worth mastering so you can make it at home whenever you want.

A few years ago, America’s Test Kitchen took a stab at a milder version, but, from my research, this recipe from Hattie B.’s restaurant in Nashville is among the first, if not the first, published recipe of legit hot chicken.

Can you tell I’m excited?

Check it out in full, from the new book Fried & True, at Serious Eats: Hattie B’s Hot Chicken