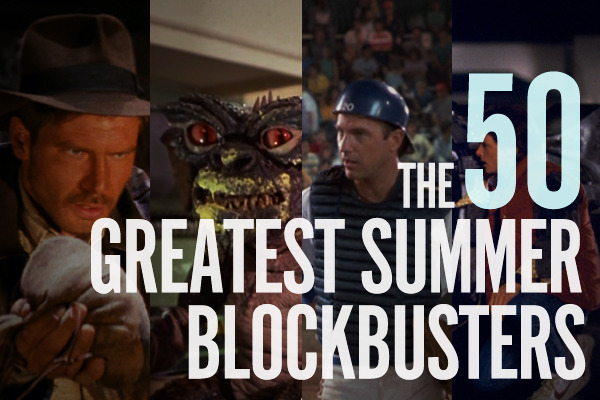 Remember as a kid, when a movie came out, and everyone saw it? Standing in line in the heat, drinking from your matching collectable cup from whichever participating fast food restaurant. People in the Batman logo t-shirts, or listening to the big hit song from the soundtrack…on the radio?I guess that still happens, somewhat. I’m sure there are still kids meal toys and lines on opening weekend. But when our summer movies are just sequences cities getting blown-up again and violent comic book heroes, they’re more designed for grownup nerds and international audiences than for whole families lining up to see Ghostbusters.

Still, summer movies are an essential part of the season, and The Dissolve have released their latest list in the Dissolve Canon: the fifty greatest summer blockbusters.

Blockbusters have become such an integral part of the way we talk about films that it’s hard to believe they haven’t always been with us. But while there have always been big movies-lavish productions designed to draw crowds and command repeat business-the blockbuster as we know it has a definite start date: June 20, 1975. That’s when Jaws first hit screens in the middle of what was once, in the words of The Financial Times, a “low season” when the “only steady summer dollars came, in the U.S., from drive-in theaters.” It’s summer, after all; why go to the movies when you could be outside? Jaws changed that. Star Wars cemented that change. And now, the summer-movie season is dominated by the biggest films Hollywood has to offer.

The team still gives Jaws the number one slot, and while there’s some notable misses, there’s still nothing like seeing a movie in the summertime.