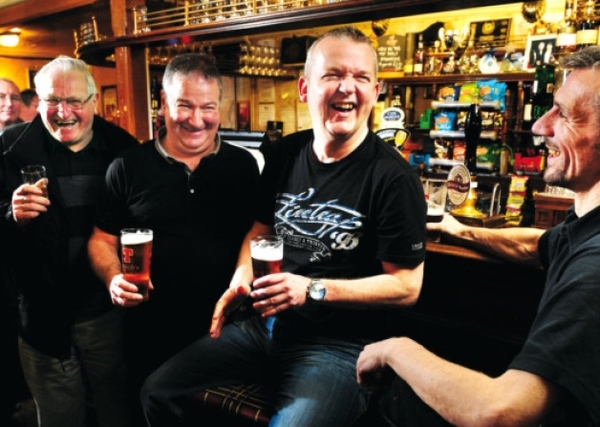 It’s comes as a surprise to no one, but there’s now some official scientific evidence that drinking with your friends is has a positive impact on your mental health.    A Scottish study revealed looked at “men aged 30-50 who drank in groups in the pub. Researcher Dr Carol Emslie asked about drinking habits and was surprised they said pub visits benefited their mental health. ‘The most surprising thing was the way drinking opened up a space for men to behave in alternative ways that aren’t so associated with masculinity,’ she said. ‘There was the idea if you’ve had a few drinks it really helps you to express emotion in a way you might not in your everyday life. I did not ask about mental health. This they raised themselves.’

The two things to note here is not that drinking is necessarily good for you, nor that hanging out with your buddies and many beers doesn’t encourage one to consume more alcohol than appropriate. Rather, it’s the communal aspect of being in a group, large or small, plus the social atmosphere provided by pubs, and perhaps alcohol, that lends to boast to your mental health.

Emslie says, “There is a stereotype that men are strong and silent about their mental health and it is something they never talk about. This wasn’t what we found. It was very much the idea that alcohol or drinking in these communal groups had this positive effect on your mental health. You’re drinking together, you’re laughing and joking and it’s uplifting. It helps you to open up and relax. Also men talked about it being a way of looking out for each other.”

The full piece features a fair assessment of the study in relationship with the danger of over consumption of alcohol.

Read it at The Scotsman: Socialising in pubs ‘boosts mens’ mental health’