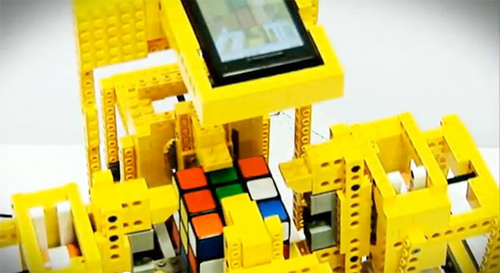 BUT, this Motorola Droid-power Lego robot can solve on in 25 seconds, which is less time than it takes me to remember how to SPELL Rubik’s Cube (Hint: there’s no C…)

“he Mindstorms robot was programmed using a Motorola Droid, which runs on an Arm A8 processor clocked at 550MHz, to show the speed of their chips. A specially-built app takes a photo of the cube’s side facing the camera, with the commands being sent to the Mindstorms robot over Bluetooth.”

Motorola Droid Lego Robot Solves A Rubik’s Cube Faster Than You Can :: Gizmodo