Inspired by Bryson and David's post this week on their favorite breakfasts that make morning bearable, I thought I'd share the simple, nutritious plate that I eat most mornings. I can put it together in just around ten minutes, and it keeps me full, satisfied, and energetic well into (my typically late) lunch time. 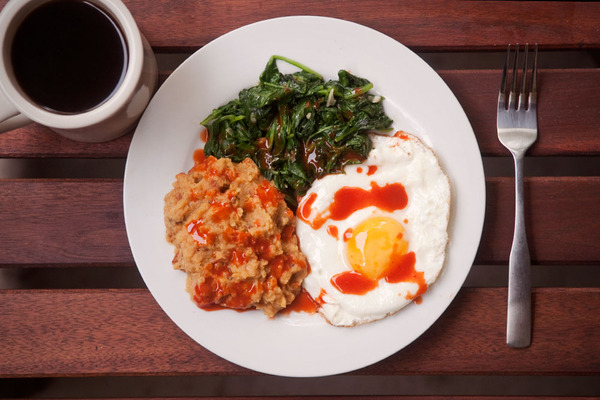 The argument goes like this: most of us eat the same thing every day for breakfast, whether it's cold cereal, a muffin or bagel, bacon and eggs, etc. So, make that same meal something that's good to begin your day. Not a sugar-filled toaster bomb, but something with some protein, fiber, important nutrients, and a little fat to make you feel full.

I've been eating this about four times a week for the last two and a half years. I started after hearing Tim Ferriss as a guest on Marc Maron's WTF podcast. I don't know much about Ferris, and have not read any of his books, so I don't really support or critique his positions. I know he can be a controversial figure, but he said something simple that struck me: Sugar (sweet stuff and carbs in general) isn't the first thing you want to introduce to your body. Make the breakfast you eat everyday something that starts your system off right. Some eggs, some beans, some spinach, something something. Nothing controversial about that.

It made sense to me, so I tried it. And though I do miss my beloved Frosted Mini Wheats, I actually look forward to eating this everyday. Still.

The meal is this: 1 1/2 eggs (one whole egg, and one white), a pile of cooked lentils, and a serving of garlic spinach. And everything gets covered in Mexican hot sauce. If I have leftover veggies from the night before, I'll sub them in. We often have a huge bag of fresh spinach in the house (we get it at Costco), but I'll often use frozen, or substitute frozen peas. On special days, I'll add a strip or two of bacon or fresh herbs if we've got 'em. Every once and a while, I'll have a piece of toast on the side.

It takes me about 10 minutes to make the plate, and a press pot of coffee or tea. Here's how to do it.

I cook up a bit pot of lentils about every three-four weeks, and store them in smaller containers in the freezer. They take about ten minutes to prep and store, and about 30 minutes total cook time. This is how I do it:

Cut up the carrots into medium chunks. Don't peel them, but do scrub them clean. Saute in a large pot with olive oil until they start to brown. Add one-two cloves of garlic, peeled and smash but not chopped, and a bay leaf or two if you want to get fancy. Add the lentils to the pot, and water or broth in a 1:2 lentil-to-liquid ratio. Cook until they burst and are quite soft, 20-30 minutes. Done.

Two things to note about the lentils: I cook them until they're totally soft and mashed. The texture is similar to refried beans. That's just how I like them; they lose their form and texture in the freezer anyway, so I just let them soften completely at the cooking stage. I'll add a splash of water when I reheat them each morning. 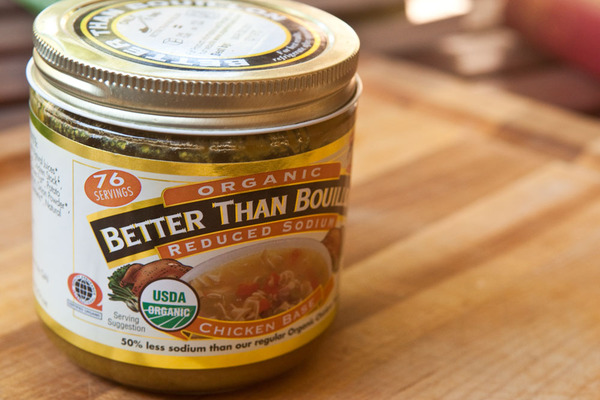 For a cooking liquid, I boil water in a kettle and season it with this stuff. I'm all about real broth for soups and sauces, but that's overkill for such a simple breakfast. I use the organic low-sodium stuff, and basically, I treat it as the salt for the dish, but with the added benefit of all these other savory flavors. This makes them taste really rich and satisfying for such a simple combo of ingredients. I buy, like, one jar a year. This and the totally softening of the red lentils is what makes me love this breakfast so much. Oh, and mixing everything up with the egg yolk.

I store these in 3-4 day portions in the freezer, and pull them out as needed. 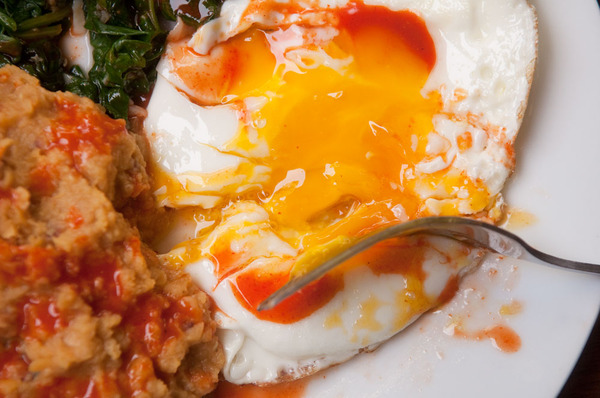 1:00 – Add garlic and a little oil to skillet and let soften for 1o seconds. Add spinach and saute. Pinch of salt.

3:00 – Place spinach on plate and wipe out skillet. Add a little olive oil to skillet and fry eggs.

6:00 – Place cooked eggs on plate. I usually undercook them just a bit, since they'll continue to cook with carry over heat. Cooked in the pan, overcooked on the plate… and all that.

7:00 – Add lentils and a splash of water to skillet. Select hot sauce of choice for the day. It's usually Tamazula, Huichol, or Cholula. Sometimes I'll do sriracha to shake things up.

9:45 – Add lentils to plate, cover everything in hot sauce. Assess my success in coffee making.

That's how I do it, and I can't recommend it enough. Give it a shot, and let me know what you think. If you have a breakfast routine, I'd love to hear about it.