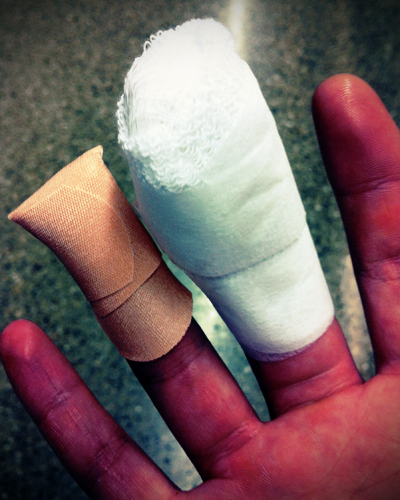 So…if I had my preference, I would never admit this to anyone that hadn't seen me in bandages. I'd keep it as my own little secret, and try to come off as a professional, and never have to be vulnerable online. Cause that's what you do with embarrassing information, right? Curate it out of your internet identity, and only take photos of your house when its clean and full of interesting items and cups of tea?

Except…I don't really believe that. I believe in authenticity, and telling the whole story, and being willing to geek out over something amazing and admitting you're not too cool to get obsessed with new ideas, and all that stuff.

So here's the truth: I hurt myself on the table saw. Like soft pink flesh meets forty teeth-per-inch carbide tipped blade spinning at 3000 RPM.

To clarify: any table saw injury is bad news. And as far as table saw injuries go, I was very, very lucky. I still have ten fully functioning fingers…though one is a bit out-of-commission right now. But, woodworking can be dangerous, and no matter how lucky you get and grateful you feel (I was and I do), it's no small potatoes.

If you wanna hear the story, read on. There are a few photos of post-stitches injury. They're not gratuitous, nor bloody, or particularly gross, but do be aware if you're not much for that kinda thing.

December 15th, 2011. 5:15pm. I finished my computer-y work for the day, and headed downstairs to work on some handmade holiday gifts. Step one: shave off the edges of a bunch wood scraps so as to glue 'em up in a laminated block. If you don't know what that means, it's geeky jargon that you definitely don't need to look up.

The important part is this: when you work with smaller pieces, your hands are closer to the blade, which means you need to take extra precautions.

Which I did. I mean, I thought I did. I had all the appropriate safety gear on, no loose clothing, and had the saw set up properly. I was praticing proper technique, following the rule of using a push stick when the fence is set less than 3″ from the blade, which it was and which I did. And, when I was five (of a likely forty or so) cuts in, I felt it.

Honestly, I don't know what happened. My fingers were in the right place (read: not near the blade) when I started the cut. And then the pain came. I mean, I remember watching my hands and being careful, and then, the blade just hit me. I guess I blacked out the details. But I was following the rules…I thought.

I probably cut myself at least onece a month. Little cuts, tiny scabs. I deal with lots of sharp things – kitchen knives, chisels, craft blades, bike tools, rotary cutters, utility knives, power tools, etc – every day. It's part of my work. I don't think I have a fingerprint left without some sort of tiny scar. There have been a few times I probably should have gotten stitches, like when I sliced the entire length of my thumb on a brand new box grater, and have a hash-brown shaped scar to prove it. I've foolishly run razor-sharp brad-point drill bits into my palm while supporting wood, and regularly sand down my flesh and fingernails with power tools.

But this was something else altogether. Except for broken bones as a kid, I've never said to myself, “Chris, you can't fix this on your own. You have to go the hospital.”

At that moment, I said to myself, “Chris, you can't fix this on your own. You have to go the hospital.”

Thankfully, my wife was home and happened to be upstairs working on wrapping our joint Christmas presents, and she knows what to listen for when I'm working on stuff in the basement. And she replied as any normal, loving person would when someone shouts from floors away.

I called her name.

Thankfully, a brand new urgent care facility had just opened up three blocks away ten days before, and it was not only closer than the emergency room, but the insurance copay much more friendly. I got right in, things were stitched, prescriptions written. 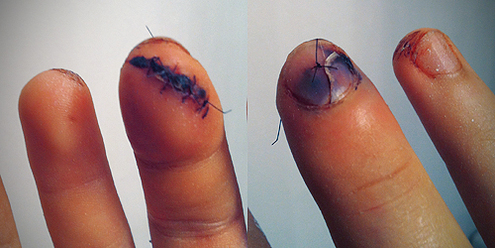 So, this past holiday season was pretty interesting. I had to give out a lot of IOUs, due “When Chris is able to use power tools again.” Present wrapping took four times as long. Cooking Christmas Eve dinner was playfully more challenging.

Now, the stitches are out. I've lost 75% of the fingernail. It's still pretty swollen. The scar looks pretty good, though I severed some nerves, and the top of my finger is numb while I have twice the sensation on my fingertip. I still have to be very careful: I can't type with it, and can't touch thin surfaces like corners of furniture or the edges of drinking glasses. I may never be able to play fingerstyle guitar again. Which is a very significant loss to me.

I'm embarrassed it happened. I'm embarrassed I'm a statistic among the woodworking community, and it was hard to not be able to give my loved ones their handmade gifts.

There are still brilliantly dark purple blood spots on my basement floor. I didn't know blood could be that color. I'm gonna leave them there, at least for a while. It's painted, and covered in ink and paint anyway, they don't look like blood to the uninformed eye, and I don't have any diseases that would make them dangerous. They help me to remember to be careful. And they make me giggle a little bit.

But mostly, I felt grateful. I have ten fingers, and they won't be totally disgusting to look at once the bruising goes away and my fingernail comes back…though I'm sure it will never be the same.

But as far as table saw injuries go, this was a best-case scenario. And if everyone who regularly uses tools like this is going to go through it at least once, I'm really glad this was mine.

I have gone back to using power tools in the last few weeks, even my table saw. It was hard. I was nervous. Obviously, I'm extra cautious…my body remembers what happened even if my brain tells it I'm being careful. They're scary, but they help me express myself and create things I use in my life and give to people I love, as well as document here as part of the greatest-job-ever. Which I'm so thankful to have.