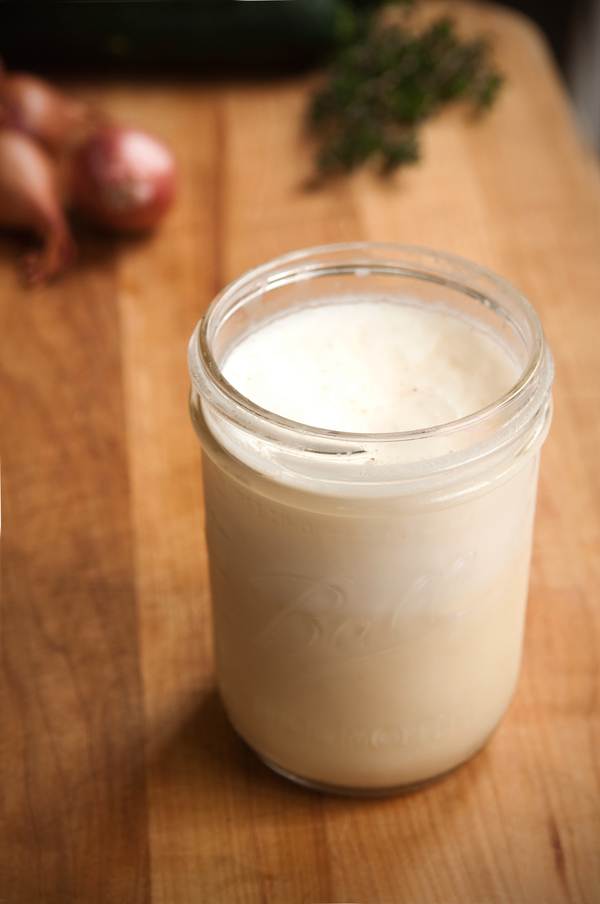 In the last few decades, lard has gotten a bad wrap in the U.S. From playground name-calling to the low-fat (and high chemical) diet of the 90s, we became scared of pig fat. We imagined it as a heart attack in a tub, a spoonful of which will immediately clog every artery in your body and you might as well just give up right then and there.

But here’s the thing – first off, fresh, naturally rendered pork fat is a completely different product than the whipped, hydrogenated stuff you find in the supermarket. And lard actually contains about half the cholesterol and one-third of the saturated fat of butter. Really.

So, cooking with it once in while will not kill you. What it will do is make all your food taste a lot, a lot better. And since it’s not always easy to find – though most Latin American markets or Eastern European markets with a butcher counter usually stock it – it’s time to make our own. Here’s how. 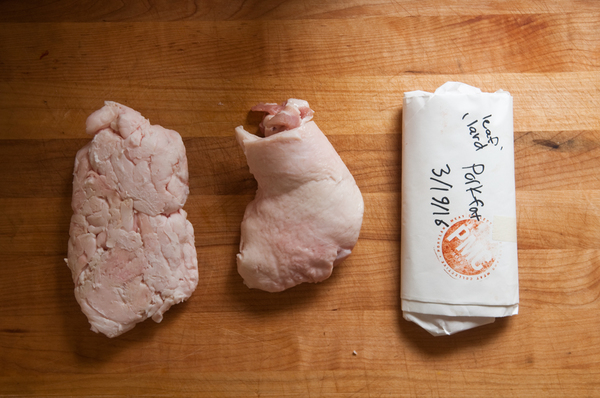 The cool thing about rendering lard is – it’s not a recipe, really. It’s a technique. All you need is some pig fat, which you can get from any high-quality butcher shop, or you can save your own trimmings from pork chops, roasts, etc.

If you want to use your lard for desserts like pie crusts, scones, or even biscuits, try to obtain leaf lard, which is the soft, visceral fat from around the pig’s kidneys. It has a cleaner flavor that won’t add any meatiness to your sweets. But, here, meatiness is exactly what I’m going for, so I’m using a mix of fats that I took home from my recent pig butchery class at the Portland Meat Collective. (Which was, FYI, totally amazing and very, very fun). 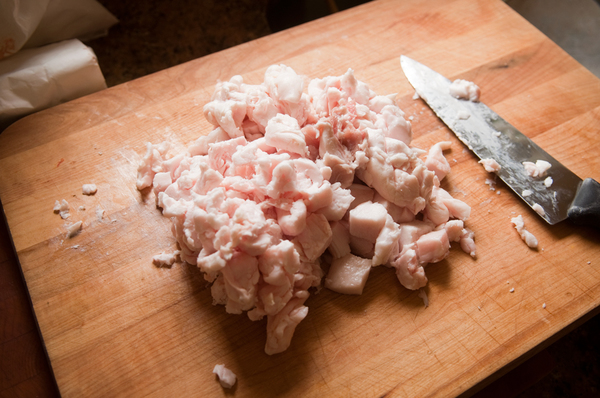 Begin by chopping your fat into small pieces. Don’t worry about little bits of muscle that cling to it. Those will naturally separate themselves out and become cracklings, and, having confit-ed all day, are totally delicious to pick out and treat yourself with a sprinkle of salt. 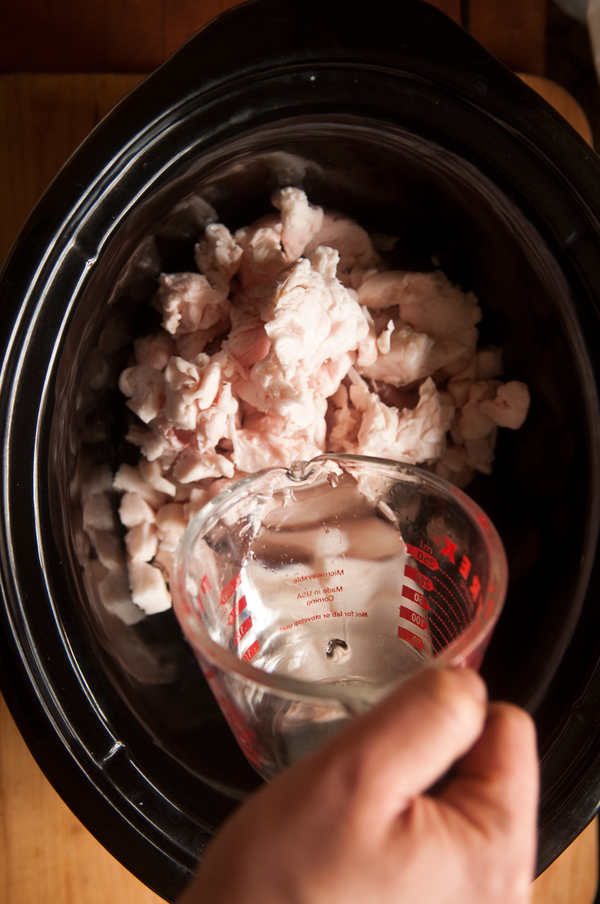 There are many ways to render out the goodness, but the easiest, and least messy, way is to simply use the slow cooker set to high. Add your fat, and pour in a short layer of water to prevent burning. 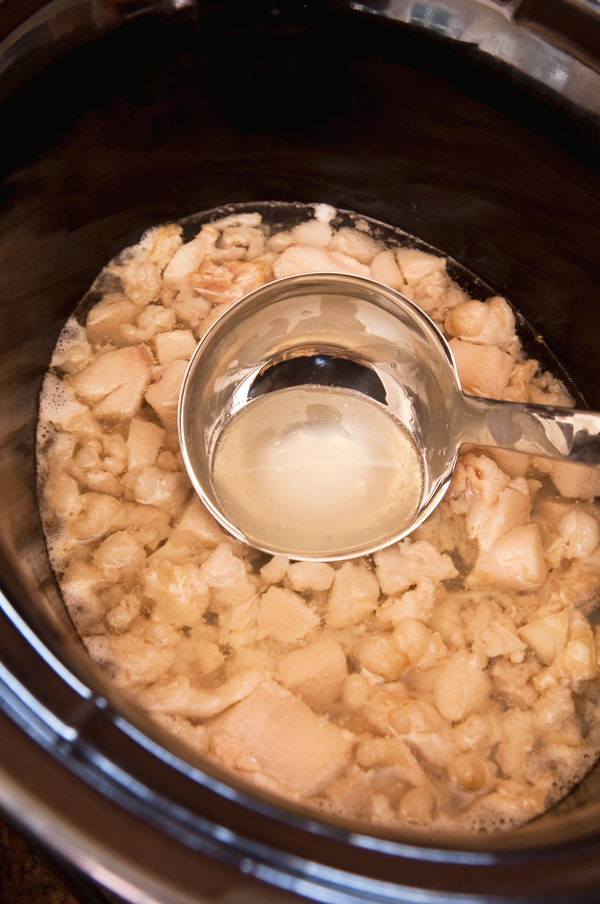 As the mixture begins to cook and bubble, the clear, clean fat will naturally rise to the top. Use a ladle to remove it every half and hour or so, leaving any particulates behind. 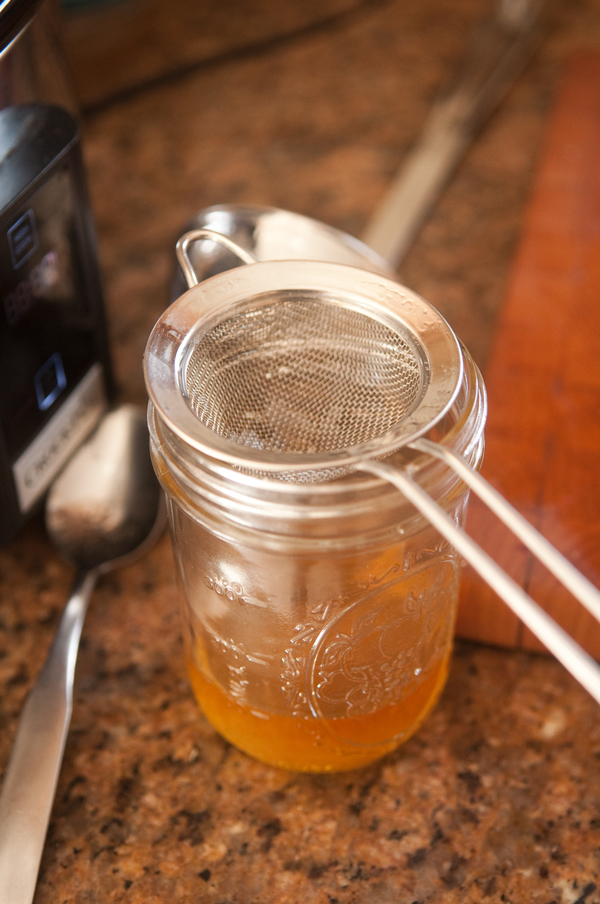 Strain the liquid into a heat-proof container (a Mason jar works great). When everything is done cooking, there will still be lots of solids in the cooker. The stuff that looks edible and delicious is. Enjoy it.

Stored in the refrigerator, it will keep for… a long time. Just make sure it’s covered and sealed, so it doesn’t pick up the funky flavors of the fridge. You can warm it up and reuse it, say for confit or carnitas, and it will only get better as it picks up more savory flavor.

Use as you’d like – it will make any sautéed vegetable taste better, and add loads of richness to a pot of beans. I like to sear my steak or chicken thighs in it – it’s a got a pretty high smoke point, and add serious, serious flavor.

Enjoy. Just not with a spoon. Or do. No one here will judge you.