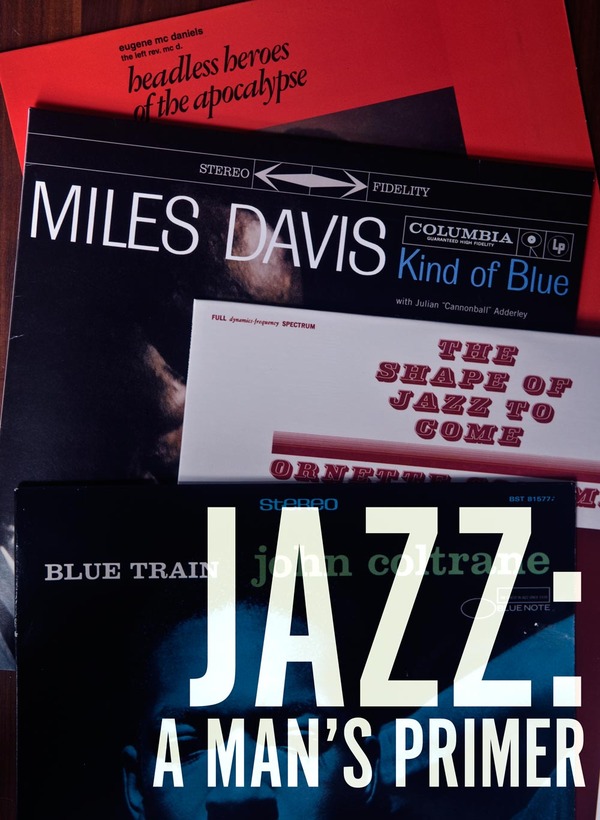 Part of being a good man is about continually expanding your horizons and having a sense of the things you like and the things you don’t. That’s why we’re kicking off a new Everyman’s Guide to some of the things about which we think every man ought to have a knowledge and opinion. And we’re starting out with the great American genre of Jazz.

Jazz is quintessentially Stateside. It began in the melting pot of New Orleans as musicians started exploring the cross-pollination of American and European classical music with West African music and slave folk songs. Jazz quickly spread through America (and the world) as the 20th century progressed, expanding into new genres and sub-genres as it went. Jazz exists within its own musical structure but bursts with passion, commitment, and improvisation. If you’ve ever seen a soloist “fighting for it,” “chasing it,” giving it their all as they wrestle to find and express that thing in life that we’re all craving, you’ll know what I mean.

We listen to great jazz musicians the way we watch our favorite heroes: we witness a single individual – or, even more incredibly, team of individuals together – with nothing more than an instrument and an idea of something to express, simply making it up as they go.

But as with any new art form or genre, it can be daunting to try and dip your toes in. If you’re like me, I always want to start with the greats, the standards, and then go for the deep cuts from there. That’s why we’ve started this list of what we feel are the most important jazz albums for those of you who are looking to start exploring one of the 20th century’s seminal art forms.

All roads lead to Miles Davis’ game changing 1959 album, “Kind of Blue.” Considered by most to be the greatest jazz album of all time, the band features such legends as John Coltrane, Bill EVeans, Cannonball Adderley, Paul Chambers, and Jimmy Cobb. The album exemplifies modal jazz (in this case a series of modal sketches with set scales defining the parameters of the musicians’ improvisation) as a departure from Davis’ previous work in Hard Bop. I’ll never forget the first time I sat in a car with a pretty woman and heard the piercing purity of the trumpet in the alternate take of “Flamenco Sketches” (which as it turns out was the first take of the song and the only track to be completed on the first take). The album is a great starting place for beginners looking to explore jazz in greater depth as the music in incredibly melodic without sacrificing artistic integrity or experimentation. Kind of Blue captures something of the ineffable, the impossible to describe lightning-in-a-bottle that’s at once masterfully tactile and soothingly thought-provoking – an elegiac ode to a forgotten place you’ve never been to but always known.

Next up is Dave Brubeck’s swinging hit, “Time Out.” Think Mad Men, think sophistication, and you’re halfway there. The album was the soundtrack for the New York City beat generation and the hip, artsy parties of the 60’s. In fact I’d bet most have people have heard “Time Out” in films and other works without even knowing it. The inspiration for the record came while Brubeck was abroad on a tour sponsored by the US State Department and came across a vagrant troupe of Turkish street musicians jamming on a traditional folk song in a time signature that was obscure for Western music – 9/8. Trying to sum up the intricacies of the counterpoint between the time signatures for the piano and sax vs. the drum is pointless; the quartet slides between beats and melodies in a way that was so innovative in 1959 that it was generally panned by critics before going on become one of the best known and highest selling jazz albums out there.

Choosing between legendary saxophonist and composer John Coltrane’s two most beloved albums “Blue Train” and “A Love Supreme” is a bit of a Sophie’s Choice, but ultimately I had to land on “Blue Train.” Blue Train was Coltrane’s first album as leader and marks not only his debut from a middling musician to one of the all-time greats but also displays the beginning of his use of what later became known as Coltrane Changes. Additionally Coltrane himself declared “Blue Train” to be his favorite album of his. Coltrane musical influence can be seen as a through-line carried by other jazz artists even up to later hip-hop innovators like A Tribe Called Quest and Tupac, and it all stems back to here.

The Shape of Jazz to Come – Ornette Coleman

The name says it all. When this album hit in 1959, it broke through the jazz-thinking of its time by establishing free jazz and laying the groundwork for later avant-garde jazz. Throwing chord structures to the wind, Coleman’s quartet begins each song with a short thematic statement followed by some free-running improvisation before circling back to a repetition of the main theme. The opening track, “Lonely Woman” was inspired by a photograph Coleman came across while on his lunch break working in a department store of a woman who seemingly had it all yet whose face betrayed sadness just under the surface. Fred Kaplan wrote of the song:

‘Lonely Woman’ begins with Haden playing a slow bass dirge. Higgins follows with a fast drum riff (a pairing of slow bass and fast drums was unusual enough). Then Coleman and Cherry, in unison, blow a sorrowful melody, both of them bending notes, wailing, so naked with emotion that it still raises shivers a half century later.

Known as “The Angry Man of Jazz” for his fearsome dedication to the music and his refusal to compromise for his art, Charles Mingus was the godfather of the upright double bass and a masterful composer. Mingus’ career was spent narrowed in on collective improvisation with his band members, often writing to their strengths in such a way that he is considered the heir to Duke Ellington. “Mingus Ah Um” unites all of his influences in one spectacular album: the driving jubilation of Hard Bop, the rambunction and ruckus of Gospel, and some tasteful sprinkles of Third Stream, free jazz, and classical music that gets down deep in your bones. The opening track “Better Git It In Your Soul” (a personal favorite of mine) draws on the old-timey gospel music and preaching of his childhood and is a swinging good time like you’ve never felt before. “Self-Portrait in Three Colors” was written to accompany John Cassavetes’ classic directorial debut, Shadows, but ultimately wasn’t included for budgetary reasons. “Fables of Fabus” is a track named after infamous governor of Arkansas who vehemently opposed segregation in Little Rock, forcing President Eisenhower to send in the National Guard, and is a powerful example of a musician using his art for a political statement.

Keep in mind that these are all just jumping off points. If you’re jonesing to branch out and explore some of the deep cuts of the jazz world, check out our 25 Essential Jazz Recordings Every Man Should Know.

What jazz album were you listening to when you finally “got it”? Post your thoughts in the comments below.