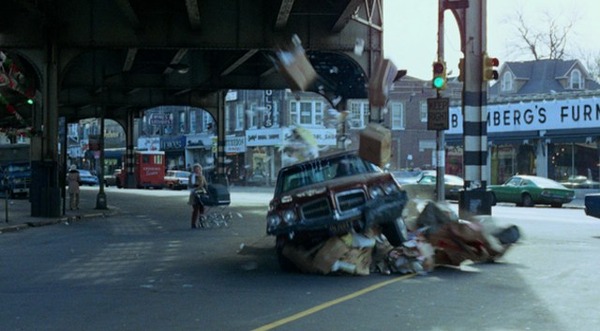 The classic scene is a cinematic tour de force as hardened detective Jimmy Doyle (Gene Hackman) manically steers his 1971 Pontiac LeMans through crowded New York City streets in pursuit of a bad guy on the run in an elevated train above him. Unlike today’s filming methods, much was left to chance as pedestrians were poorly controlled (though thankfully unhurt) and the scene even features at least one unplanned car crash (2:41 in the video below).

“The car chase was filmed without obtaining the proper permits from the city. Members of the NYPD’s tactical force helped control traffic. But most of the control was achieved by the assistant directors with the help of off-duty NYPD officers, many of whom had been involved in the actual case. The assistant directors, under the supervision of Terence A. Donnelly, cleared traffic for approximately five blocks in each direction. Permission was given to literally control the traffic signals on those streets where they ran the chase car.

Even so, in many instances, they illegally continued the chase into sections with no traffic control, where they actually had to evade real traffic and pedestrians. Many of the (near) collisions in the movie were therefore real and not planned (with the exception of the near-miss of the lady with the baby carriage, which was carefully rehearsed).

A flashing police light was placed on top of the car to warn bystanders. A camera was mounted on the car’s bumper for the shots from the car’s point-of-view. Hackman did some of the driving but the extremely dangerous stunts were performed by Bill Hickman, with Friedkin filming from the backseat. Friedkin operated the camera himself because the other camera operators were married with children and he was not.”

Gothamist recently published a short piece on the history of the event including an interview with director William Friedkin discussing the difficulties in making the scene.