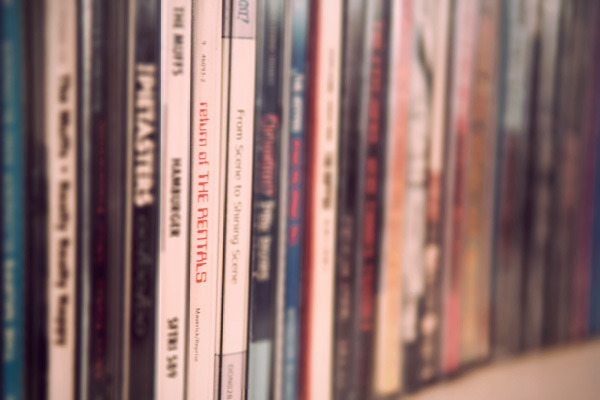 Like everyone, I guess I have a problem with stuff. With things – with keeping them too long, with placing emotional value on the physical object rather than the memory it recalls. Of course, I think I do this way less than everyone else, cause I don’t have a problem with passive consumerism (errr….), and I don’t spend tons of money on clothes, or shoes, or eating out, or on the latest gadgets, or all those things that personal finance books tell you to not spend money on.

But, buddy, do I have a media library. Not DVDs so much, but books. Lots of books. Like, a decade’s worth of fiction that I’ma get to, countless guides to hobbies and passions, and two bachelors and three masters degrees combined household worth of books.

Oh, and vinyl albums. And CDs. Particularly old CDs, the albums I didn’t buy as downloads. The ones I got in high school and college. The records that changed my life.

Sure, I’ve pared them down – lots already – to just the essentials. The 150 or so essential records…that I never actually play via CD and still have the jewel cases for cause I like the way they look on my shelves and that I still own them makes me feel. The CDs that 75% or so I’m sure are already in my iTunes library, but I don’t actually know because that also has 25,000 songs and I can’t seem to stay on top of labelings all that stuff, either.

See, I don’t really have a problem with buying stuff… but, c’mon, I’m a librarian. What if I need it? These things should be preserved. They blew my mind…That’s worth saving, right?

But, I don’t listen to them. Ever. I haven’t listened to a physical CD in at least three years, save for those I’ve borrowed from the library. I haven’t bought a CD in eight years. My last purchase was in May 2006. I don’t have a physical CD player any longer. Just a computer.

I’ve been reading and thinking a lot about stuff and money and letting go of things, and I’m finally ready to cut my media down to 25%. I’m gonna keep 25% of my books, and 25% of my vinyl records, and everything else has to go. Including all my CDs. (Did I mention they changed my life?)

I’m sure you’ve likely already done this, but this month…I’m letting go. I’ll import them into my computer. iTunes Match will automatically back up my entire digital library – all 25,000 songs – for $25 a year. (I’ll have to pare to 25k songs, too, but I need to do that anyway). Twenty years of library-ing and collecting will live in the cloud forever, and I no longer have to worry about manual backups or keeping hard copies in case hard drives fail.

And while I’m at it, I’m gonna embrace HuluPlus and Netflix and let go of my cable subscription and oh-so-library-inducing DVR. Which I never actually use. And I’m gonna let my subscription to The New Yorker lapse, for now…because I’m so behind I just read a story about the threat of congress shutting down, and the cartoons are starting to have ghosts and jack-o-lanterns in them. (!)

I know everyone says this, but they’re just something you think you need because you have it. It’s the mindset of a curator, sure, but it’s mostly just a fear of missing out. But, I’m thinking I’d rather miss out on a few New Yorker stories or an episode of The Daily Show than the thing I’ll actually be doing when I’m not trying to catch up on all that reading and watching and listening.