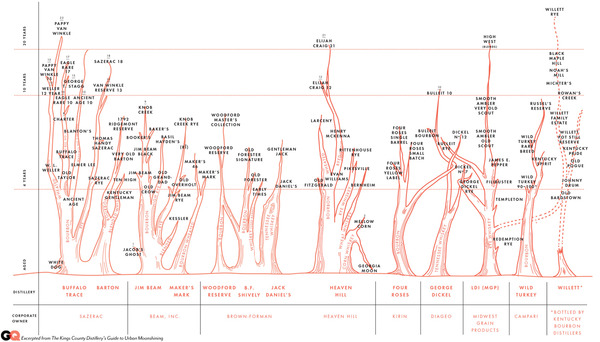 GQ shares this fascinating chart excerpted from the new book The Kings County Distillery Guide to Urban Moonshining: How to Drink and Make Whiskey by Colin Spoelman and David Haskell. In it, you can see the dominant bourbon whiskey’s produced in Kentucky, Tennessee, and Indiana, while noting that a surprisingly high number of labels come from a mere handful of corporations and only a few mash recipes…meaning a whole bunch of bourbons and ryes are basically the same liquid and aged for different lengths. And since the barrels used for bourbon all have to be brand new charred white oak, the container for aging actually matters very little.

Here are a few highlighted quotes from the GQ article,

Of course, this doesn’t mean that all whiskeys basically taste the same, because anyone who’s tried a few can tell you: they don’t. So what’s the difference?

“While the four mash bills contribute to the flavor, the more significant differentiation among brands is done in the warehouse, where the type of construction, placement within the warehouse, and duration of aging have a stronger impact on the finished spirit.”