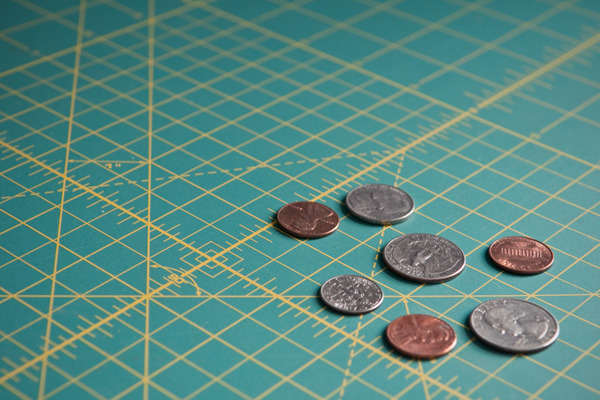 Just before the month began, I detailed my household’s plans to not buy anything during the month of October. You can read the whole scenario here, but the summary is, simply: we wanted to take a break from consumerism, and attempted to use money only on bills, fixed costs, and two highly organized grocery trips. And, we did it. Except when we didn’t. Here’s how it went:

October was fun. The whole thing felt really festive. Sure, the leaves were changing and the weather getting crisper and there were all those cool things that are always special about fall, but even on the morning of October 1st, things felt a little different. It’s like when you were a kid, and you could always tell a special day off of school from just a normal weekend… 95% of things were the same, but with a little air of “there’s something surprising about this…”

We followed all our initial rules. Our grocery timing went a little differently than planned, but as far as our commitments went, We stuck to ’em. And we indeed embraced the extra tasks and projects and effors that also went along with this month – the cleaning out of stuff, the minimizing, the no-cost time spent with friends.

According to my not-painstakingly-detailed but pretty accurate personal record keeping, we spent around 65% of what we usually do. On things other than non-fixed costs (bills, utilities), we spent only 28% of our usual, and without the violations below, we’d only have spent only 19% of that budget, all of which was basically groceries.

Certainly, the most unusual thing was simply being out of commercial establishments. With the exception of two visits to the grocery store, a night of pub trivia with friends where I only had water, one shopping trip for work, the one time we used a gift card to a restaurant and a couple other random events, we simply didn’t spend any time out “on the high street.” We interacted in our neighborhood differently. We were home, sure, but also visiting family and friends, went hiking and walking, and riding bikes. A pretty sweet way to spend a month.

The Bad…Which is Also Good

The toughest part wasn’t not “going out,” but simply having to decline invitations from friends. Of course, we tried to reimagine plans or schedule for the future, but when somebody invites you to an ticketed event, you simply gotta say no. And it was sorta weird to not be able to pick up little things for the home, but not because those things were necessary. Just some of those little “oh…yeah” moments when you remember that a habit has changed.

Wth the exceptions of bills, utilities, and our standard donations, all of which we pay online, we committed these transactions during the month of October:

So, we didn’t totally nail it. The cups of coffee are easy: I had two meetings at coffee shops, and I’d never take up space and not purchase something. The same thing rings true for the restaurant tip: we used a gift certificate we’d received a year ago, and though I tried to plan accordingly, there wasn’t enough money on the certificate to adequately tip our server. And I’ll never be the type of person who doesn’t adequately tip a server. The motor oil came from the fact that my wife had to take a rather long drive, and her dipstick was reading a little low. And the same for my bike wheel fixing: it wasn’t safe to keep riding on a damaged wheel. Doing so would have further harmed the entire machine, making for a bigger expense and a waste of parts and labor later. For both of these, my commitment to maintaining moving parts of these investments trumped the October spending plan.

Then, there are the other two: eight sacks of groceries and the bike clothing. The groceries were for a family of seven. My wife runs a non-profit, and is regularly in touch with marginalized people who need assistance. Due to the government shutdown in the first few weeks of October, the food pantry/free store scene in our city was a mess, and all kinds of families were without the things they need. And they way things worked out, after my wife tried to connect this family to every program she knew, it was 7:30 p.m., and there was an apartment full of five hungry kids and two adults. And, with that special knowledge, we went and bought several meals worth of real food for this family, and took it to their home. Though we talked about it, of course, neither of us hesitated for a second.

The bike clothing was the biggest stretch, since I bought it for myself. Actual goods, that I plan on keeping. The reason? I was on a hundred mile bike ride, and I was freezing. Though I’d dressed warmly, I hadn’t accounted for the 22 mph winds that I found coming right at me on top of the 35° temperature. My core was warm, but on the high-exposure points like my knees, arms, and especially feet, I was very, very cold. I was in the middle of a one-way ride, with someone picking me up on the other side. I’d had it planned for a month. So, I stopped in the only town between my two points with a bike shop and bought the things I needed so I wouldn’t be miserable. I’d planned to get some this year anyway, and somewhere around mile 45, I realized I was going to finish the ride no matter what, and while I didn’t have to have the additional gear, my almost numb feet certainly appreciated it.

And that’s what I learned this month: the exceptions to my rule are just as important as setting the rule in the first place. We’d made a commitment, sure, but the kind of man I try to be is also a commitment: to not being a jerk and not tip for service fairly or buying something at a cafe where I’m taking up space; to buy quality, long-lasting items and maintaining them, rather treating goods as disposable or commodities. To feeding hungry people out of my own resources. And to not following the abstract letter of the law, but the heart that motivated it in the first place.

I had an amazing October, and I’m grateful for having done it. We learned a lot about how we treat money, and plan to implement plenty of it in our regular living. And I learned more about how to still be me, even when things look different and I have to think on my feet. Or, in this case, since I couldn’t actually feel my feet, on my butt. Which, after mile 102, was also pretty numb.