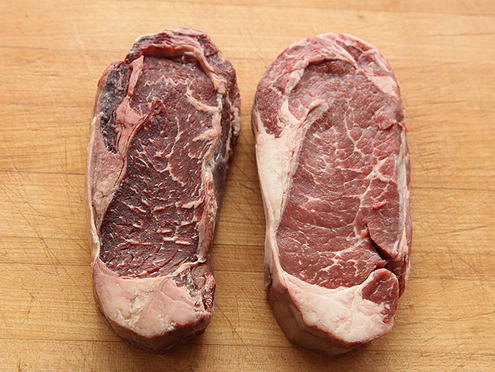 If you’ve ever forked up the dinero for a great steak at a high-quality steakhouse, and noted how much better it tastes than the ones you whip up on your own backyard grill, you’re probably right. And it’s not cause they’re all that much better at cooking it than you are. It’s because they likely started with another piece of beef altogether: a dry-aged steak.   Dry-aging improves flavor and texture through moisture loss, as well as the development of tasty enzymes and bacteria. So, Kenji of the Food Lab took a look into whether it’s possible to perform the aging at home, turning your supermarket steak into a high-end piece of beast.

Most experts agree that the prospect ranges from either impractical to outright impossible, but recently, I’ve heard from several reputable sources (including Cook’s Illustrated and Alton Brown) that aging individual steaks is, in fact, possible in your home kitchen. Cook’s Illustrated even goes so far as to say, “You can skip shelling out extra money for commercially aged cow.”

That’s a pretty bold claim indeed, and one that has the potential to put a dent in the business of several very lucrative steakhouses and meat purveyors.

The Food Lab: Can I Dry Age Beef At Home?