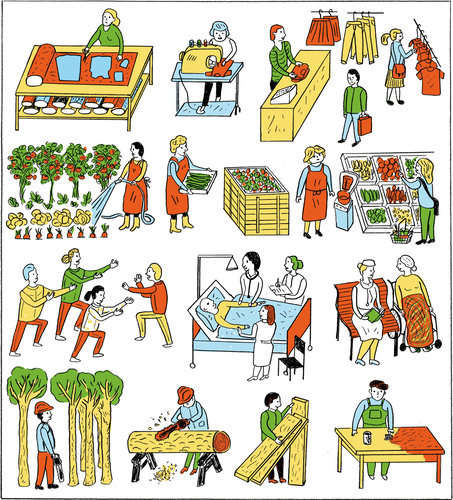 “Productivity — the amount of output delivered per hour of work in the economy — is often viewed as the engine of progress in modern capitalist economies.” But, what if, our drive to be more productive, to generate more output with fewer people, actually has met its ilmitations. What if it’s time to actually shoot to be less productive? What if we can actually improve the quality of our lives, the professions of others, the economy, and our relationships, by seeking to be less efficient?   These are the sorts of questions explored by Tim Jackson, a university professor specializing in sustainable development. He argues that it might be time to take a break from continuing to seek increased efficiency and output in manufacturing- to accept that we’ve done a lot in to developed increased productivity, and that it’s might be wise to cut back. He suggests it might be in everyone’s best interest “to loosen our grip on the relentless pursuit of productivity. By easing up on the gas pedal of efficiency and creating jobs in what are traditionally seen as ‘low productivity’ sectors, we have within our grasp the means to maintain or increase employment, even when the economy stagnates.”

He applies the idea to contrast the value of craftsmanship over mass manfacturing,

It is the accuracy and detail inherent in crafted goods that endows them with lasting value. It is the time and attention paid by the carpenter, the seamstress and the tailor that makes this detail possible. The same is true of the cultural sector: it is the time spent practicing, rehearsing and performing that gives music, for instance, its enduring appeal. What — aside from meaningless noise — would be gained by asking the New York Philharmonic to play Beethoven’s Ninth Symphony faster and faster each year?

It really is a fascinating read, and worth thinking about. Especially if you’re a reader of sites like ManMade.