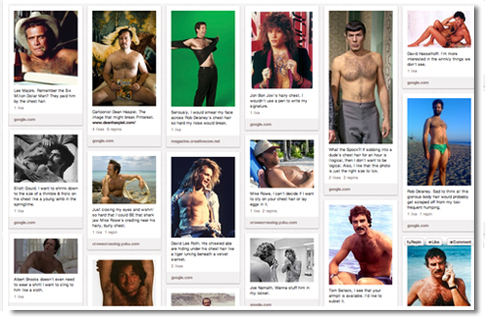 I’ll admit…that’s a pretty unlikely photo to accompany a post on ManMade. But, bear with me. (Get it?)

It’s a screenshot of the funniest site I’ve found this week, a Pinterest page entitled, “Hairy Chests I Want to Cry On,” by comedian Stacey Nightmare. It includes, not surprisingly, some fine, manly chests, but the real gem is Stacey’s commentary, including captions like,

Okay, you get it. It’s funny, but it also serves as a helpful, perhaps even encouraging, reminder: In the era of when nearly every Men’s Health magazine cover has featured some ripped dude with a torso as smooth as his equally-waxed bottom, some people think having body hair is something that comes along with being a guy.
So, let’s discuss.

Confession: I’m a hairy guy. Not disgustingly so, and, in reality, I’m probably just average for someone of my ethnic background. But, I can grow a mean beard, have formidable chest hair, and a healthy collection on my arms and legs.

In the past, I’ve been self-concious about it. I could grow a beard in sixth grade, and was teased for having chest hair in high school. I’ll even try to hide my hands and arms when making how-to videos or taking step-by-step photographs.

And, I don’t know why. I’ve been told by women that it’s a nice, healthy, even manly amount. That I look like a guy is supposed to look. And maybe it comes from the “I like it, cause that’s how you’re supposed to look” perspective (I’d look pretty strange without a beard shadow and my heavy eyebrows and general fuzz), but it’s hard to believe sometimes. Perhaps it’s similar to when some women have a hard time believing they look more beautiful without makeup.

So, I’m curious what you think. There’s a survey below, with questions for both men and women. Please join the conversation, and don’t stop there. Share your thoughts in the comments below!

Disclaimer: I know that body hair and general hair texture, etc, are intertwined with race and ethnic background, and I’m trying to be inclusive of that. I also know that not all men are interested in female partners, and not all women in men. For the record, I’m a straight, white male, age 29; an averagely hairy guy from a European background, and that’s what I bring to this converstation. I invite discussions of diversity in the comments below.

See more: Hairy Chests I Want to Cry On