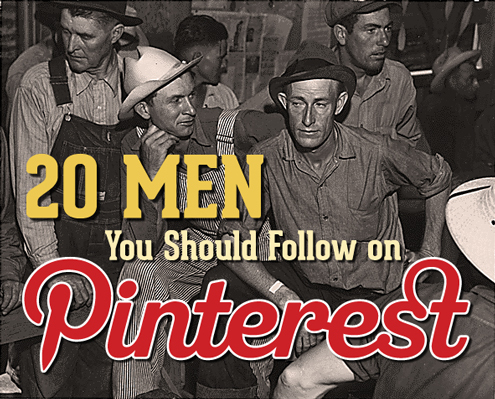 To tell you that Pinterest is hot these days would be like saying football is a sport. Duh. We all know that. But one complaint I’ve heard from a lot of guys is that Pinterest lacks one thing: men.

According to Mashable, nearly 70% of Pinterest users are female. So, for many guys who are on Pinterest, that means they get flooded with recipes for fancy desserts, photos of hair, and a ton of jewelry and fashion pins.

Well fear not, fellow dudes, because I’ve compiled a list of 20 male Pinterest users that you should follow. These guys have good taste, pin often, and, like I said, are guys.The list I’ve compiled is not in order of “best to worst”, rather it’s just alphabetical. Each guy has their own pinning style so it’s hard to say one is better than another. Also, come by the ManMade Pinterest boards to see what kind of goodies we’ve been collecting.

Obviously there are plenty of other guys on Pinterest that are worth following that I don’t know of. If you know of any, leave a link for us in the comments below. Be sure to check out the ManMade Pinterest boards to stay up with all the modern manliness, art, and DIY projects we’re finding and cataloging.