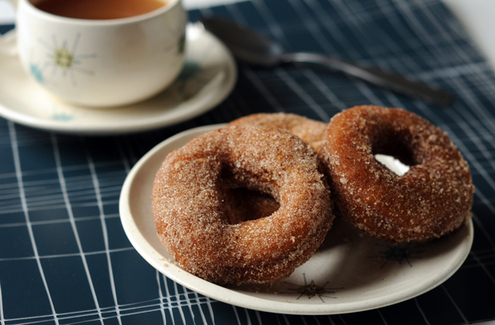 There’s a somewhat famous pumpkin festival about an hour from my house, which came very highly recommended when I first moved to the city six years ago. It’s standard fair and festival stuff: touring food trailers and games, local non-profits and faith communities fundraisers, student art, etc. It’s kinda crazy and kitschy and pretty awesome, and certainly worth a visit. But, after a few years, my attendance slowed: mostly ’cause all we’d do is stand around and eat mediocre food that’s really bad for you, look at the cloggers, get stuck behind the parade, and stand in line for forty-five minutes for some seriously tasty, piping hot fresh pumpkin doughnuts, the highlight of the festival if you ask anyone.

So, this year, we decided to skip the drive and the parking fiasco and the food-on-sticks, and just make pumpkin doughnuts at home.

And they were incredible. They’re awesome with hot spiced cider, coffee, tea, milk, and, as I found out, Souther Tier Pumpking Ale. The recipe makes a lot – twenty-four rings and twenty-four corresponding holes, plus a little extra for making funny shapes and seeing what happens.

The sweet vs. spice balance is perfect, though I wish they were just a tad more pumpkin-y. I wonder if there’s a way to add just a bit more than the recommended cup without losing the appropriate dough consistency. We skipped the glaze and just sugared them all…and there was still plenty left over. (Also, I’m always adding nutmeg to my cinnamon sugar concoctions now…it’s brilliant.)

They’re going on three days old since our doughnut/apple bobbing party on Saturday (we thought we’d celebrate like it was 1955), and, though a bit stale now, they’re totally worth the calories and I can’t stop eating them. They’re just exactly what you wanna eat this time of year. They’d make an amazing Thanksgiving morning pre-Turkey treat.