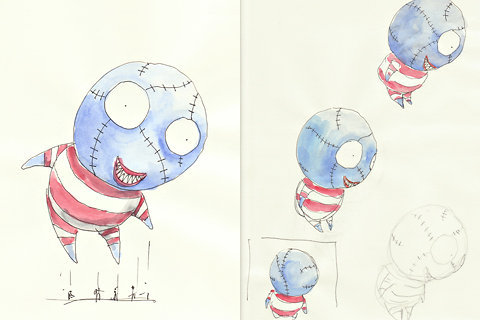 Though Tim Burton’s creations usually find their annual heydays during the Halloween season, this year, the filmmaker’s dark, macabre aesthetic will be sticking around for another few weeks. This year’s Macy’s Thanksgiving Day Parade will feature B.Boy, a Burton-designed balloon, mixing it up with Snoopy, Kermit the Frog, and the Keith Haring guy that started showing up a few years ago. 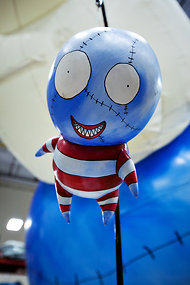 “According to an origin story dreamed up by Mr. Burton, B. was created, Frankenstein’s monster-style, from the leftover balloons used in children’s parties at the Great Ormond Street Hospital in London. Forbidden from playing with other children because of his jagged teeth and crazy-quilt stitching, B. retreated to a basement lair, where he obsesses over Albert Lamorisse’s film “The Red Balloon” and dreams that he, too, will be able to fly someday.

“There’s always been something about balloons,” Mr. Burton said, by way of explaining his B. Boy character. “You see them deflated and you see them floating. There’s something quite beautiful and tragic and sad and buoyant and happy, all at the same time.”