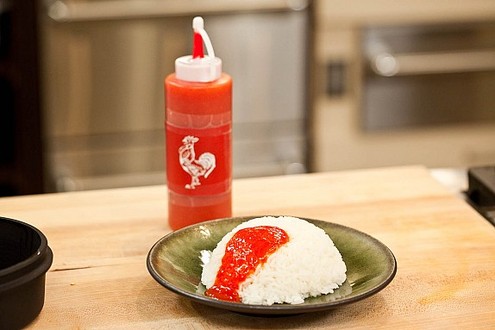 At the risk of saying something that’ll probably make you roll your eyes and scream, “No kidding” with considerable volume, sriracha is amazing and addictive stuff. This decidedly American sauce has its roots in Thai and Vietnamese condiments, and is know for its iconic rooster. A perfect balace between spicy, tangy, and garlicky, it’s surprisingly versatile, working equally well in Mediterranean and Latin dishes as those from Southeast Asia. And while it’s a basic combination of five ingredients – chiles, garlic, sugar, vinegar, and salt, it’s also filled with preservatives, which explains why that one bottle has lasted in your cupboard, unrefridgerated, for years. So, America’s Test Kitchen set out to create a fresh, balanced version, without preservatives, at home, and on the cheap. 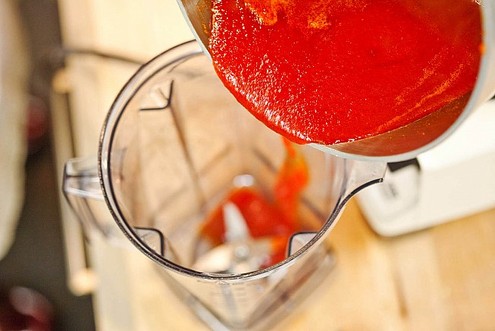 I took the extra prep step of seeding the jalapenos before adding them (raw) to the blender, which eliminated the need to strain the sauce at all. I tweaked the proportion of vinegar to water, blending the mixture until no red bits were visible through the container, and then I transferred the potent mixture to a saucepan. I added sugar and salt, brought the mixture to a boil… and simmered the sauce until slightly thickened. After 20 minutes, I gave the sauce another whirl in the blender to thoroughly pulverize any chile bits. I let it cool and gave it a taste—straight up on a spoon. It was delicious. Hot (but not searing), spicy, salty, sweet, sour: the perfect condiment. And yeah, I will put it on just about anything.