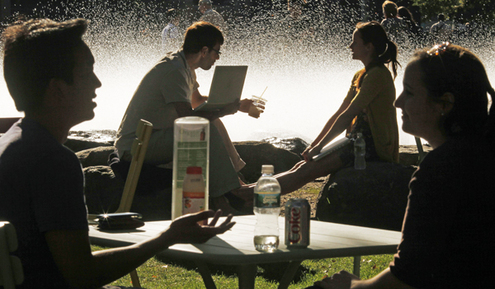 “Despite the economy, don’t abandon enthusiasm. Your deep, serious desires might be what saves you.”

I don’t often get terrifically philosophical or motivational-y on ManMade, but when I do, it’s usually a variation on, “Make stuff, and do the work you love.” Which, of course, is a scary thing in the 2011 U.S. economy, with around a 10% unemployment rate, and many folks who working in jobs that do not reflect their skill sets, training, or education.

But, while it may see frivolous to seek to do the work you love, it’s actually essential to improving our economy. The Atlantic reports,

Passion, despite how often we use the term to tout company commitment or extol romantic excitement, is often misunderstood or confused with other motivations. Many people view dreams and passion exactly as [New York Times reporter David] Brooks painted it: as a hopelessly idealistic, selfish, or irresponsible choice that is diametrically opposed to commitment to others, responsibility, security, or success. But I have spent the past year and a half researching a book about passion and people who follow passionate paths in life, and nothing I’ve found backs up that premise or belief. Indeed, I would argue that passion is one of the most important elements in any effort to improve a community, build something of value in the world, and even survive tough times or a daunting economy. The fact that it also tends to lead to a sense of fulfillment within an individual is certainly one of its benefits—but it’s not the driving force that compels someone down the passion road.

The Value of Following Passion in a Jobless World