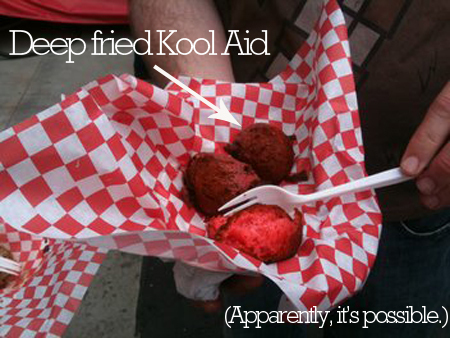 Surely, plenty of both solid sweet and savory items have taken a turn in the fryer, but what about liquids? Like Kool-Aid?

Apparently, it can be done.
Well…sort of. Sign On San Diego reports,

You’re thinking actual damp and splashing Kool-Aid undergoes some molecular gastronomy technique on its way to a hot soybean-oil bath. No. Instead sugar-reduced cherry Kool-Aid powder is mixed into a sweet batter, like flavoring. The fried-up result is a doughnut. How is this an improvement over its liquid form? It’s nicely spongy, and doesn’t stain your tongue cherry-red.