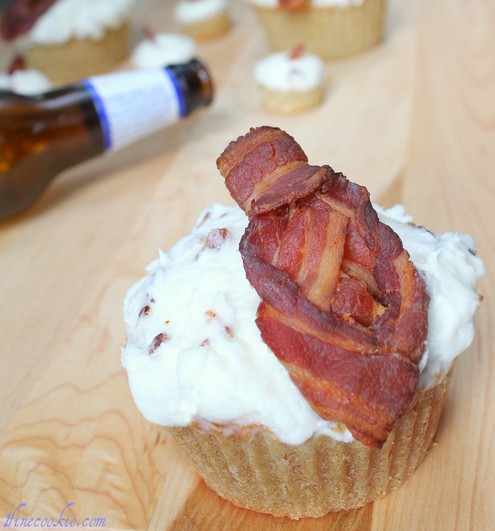 Typically cupcakes, while often delicious, are a frilly affair: little tufts of icing, delicate wrappers, and often, a little pennant or note slipped into the tub, making it oh-that-much-more-decorous.

But that’s not their fault. Just cause something is miniature doesn’t mean it has to be dainty. So, when Jasmin of One Fine Cookie sent me her most recent creation of beer cupcakes with bacon frosting, I rejoiced, and am immediately sharing it with you.

Okay, so a beer cupcake sounds strange. I know, I know. I can just see it now, you people in your so-called forums. “Oh that sounds gross,” or, “I don’t know if that would be good.” Well, don’t knock it ’til you’ve tried it.

Let me just say I have a special friend who is possibly the pickiest eater I have ever met. I know 5-year-olds with more flexible taste buds. I handed him the cupcake to taste test, and as usual he would only try a mouse-sized nibble. …

So if a person who refuses to eat anything besides burgers and Gatorade likes my beer and bacon cupcakes, then you should try it too.

If you wanna get all Father’s Day-y with it, then she even has instructions for a bacon necktie garnish. Otherwise, the bacon icing will be just fine.