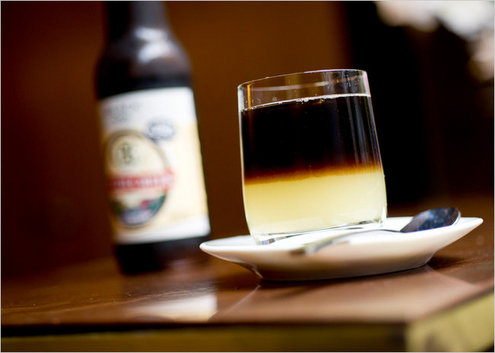 Beer is meant to stand on its own. Whether it’s ice cold or cellar temp, from a draft or a bottle (or, gah, cans), in a frosty mug or a fancy snifter, it doesn’t ask to play well with others. It’s not an ingredient, but a finished product.

Except, it does work well in cocktails. “Beer has taken on a new and nuanced role in many…bars. In growing numbers and with growing frequency, bars are not just serving beer solo but also using it as one of many players in mixed drinks. Whether or not the drinks include hard liquor, they are generally referred to as beer cocktails, and they’re much more refined than the whiskey-in-beer boilermaker of yore. Beer has gone on to make friends with vodka, and it has made peace with gin.

Because beer cocktails tend to have more volume than other mixed drinks and to be served in larger glasses, they are especially popular in late spring and the summer months, when people are looking to cool down and quench their thirst and are more inclined toward the effervescence that beer brings into the glass.”

The drink pictured above is called the Black & Yellow, and is served at Wylie Dufresne’s post-contemporary WD-50. The “black” is a dark ale, but the “yellow” is a mix of kumquat-infused gin, yuzu, and St. Germain.

Cocktails with a Beer Buzz [The Tipsy Diaries, NYTimes.com]