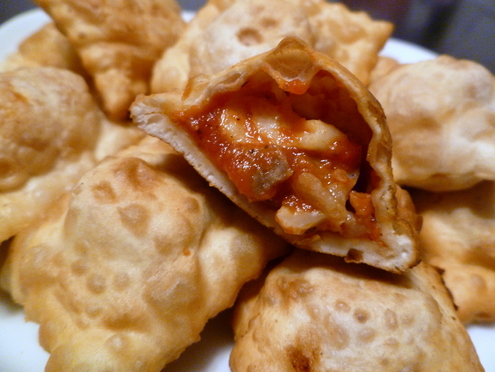 Most parents try their best, but end up being selective about junk food. Some won’t let their kids drink soda, but give them fructose-sweetened punches at every meal. Some say no to candy, but doughnuts and packaged desserts fill the pantry.

When I was a kid, we weren’t allowed pizza rolls. We had Bagel Bites, and I learned to use the oven with Tony’s frozen pizzas, but I never had a Totino’s Pizza Roll until I was in college, and some nostalgic friend bought a box on a whim.

And…they’re digusting. Greasy and dominated with a weird faux-pepperoni/green-pepper spice, I was thankful my parents never let me try any. Which is not to say they aren’t a good idea, cause honestly? Little fluffy, bite-sized inverted pizzas may very well be the best fingerfood there is. If you do it right.

And it looks like Donna Currie got it right, indeed. “The dough is more like a pasta dough than a bread dough. It’s stiff. While it could be kneaded and rolled by hand, it would be quite a bit of work. I used a food processor to mix the dough, and the pasta roller on my Kitchenaid stand mixer to do the rolling. A hand-cranked pasta machine would be fine, too. Rolling pin would work, if you like that sort of thing.

These pizza rolls are good right from the pan, and come with the same warning: this filling is molten hot. You can also make them in advance, refrigerate, and heat them in the oven to serve. I imagine they’d freeze well. “