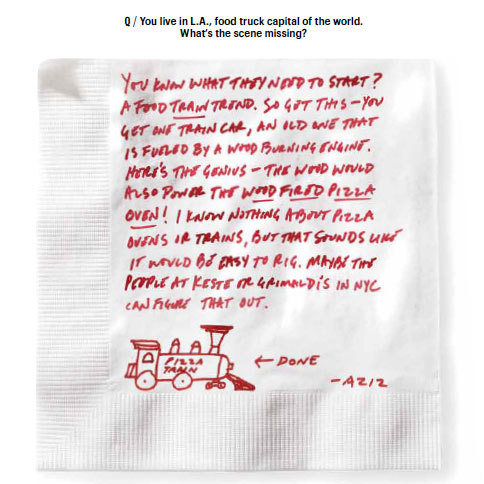 Bon Appètit has begun a new Q&A column entitled “Back of the Napkin,” in which they, apparently, talk to famous people about food. First up is comedian Aziz Ansari, the Parks and Recreation star who’s standup and movie career is blowing up.

And, as it turns out, it’s pretty interesting. And funny.

The co-star of NBC’s Parks and Recreation and the upcoming heist comedy 30 Minutes or Less is our kind of comedian. Which is to say he understands that making movies and touring the world doing stand-up is really about one thing: the food. He’s a guy who’s as comfortable tweeting about his encounters with an enchilada on a flight to Chicago (not good) as he is describing to us the otoro at Tokyo’s Sushi Sawada (“sweet and charred, like a burnt marshmallow”). In other words, he’s the perfect subject for our first Back of the Napkin Q&A.

Back of the Napkin: Aziz Ansari [BonAppetit.com]