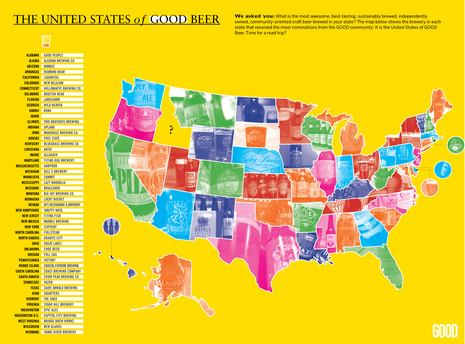 A few months ago [while hanging paper snowflakes all over my living and dining room as I recall], I watched the film Beer Wars on Netflix (it’s still there, streaming). As a film, it’s merely just another brick in the wall of essay/documentarys that explain why corporations are bad for independent businesses and artists, but it reminded me of what we’ve all learned: there’s lots of good beer out there, and it can be hard to find.

“Three companies—Coors, Miller, and Anheuser-Busch—account for an astonishing 78 percent of the United States market, with 70 percent of beer wholesalersonly selling Anheuser-Busch products. As Jim Koch of the Boston Beer Company (makers of Sam Adams) said in the movie, “It’s as if all we know about food, we learned from McDonald’s!”

In prep for the Super Bowl, the Houston Chronicle got into the “states represented by ____” craze with this chart, a rather crude map with cutout photos and a poor gradient backdrop showcasing beers by states. Thankfully, the good folks at Good.is got a hold of the idea, and created a chart worth referencing.   “It turns out, much to my delight, that the GOOD community is passionate about GOOD beer! So we asked you to nominate the most awesome, best-tasting, sustainably brewed, independently owned, community-oriented craft beer brewed in your state, and then we made our own map, showing the breweries with the most nominations. “

And…looks like it’ll eventually become a poster you can take home. Kinda awesome.

See it in it’s full, hi-res, zoomable glory at Good.