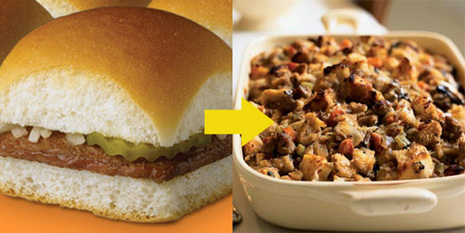 I’ve never tried this recipe for turkey stuffing made from White Castle sliders…as a matter of fact, I’ve never actually eaten anything from White Castle (other than a diet Coke that one time after the fireworks), even though their headquarters aren’t two miles from my house.

But, still, it does have the makings of classic turkey stuffing – bread from the buns, onions, hamburger subbed for sausage, then flavored with celery, sage, thyme, and chicken broth.

“In a large mixing bowl, tear the burgers into pieces and add diced celery and seasonings. Toss and add chicken broth. Toss well. Stuff cavity of turkey just before roasting. Makes about 9 cups (enough for a 10- to 12-pound turkey). Note: Allow 1 hamburger for each pound of turkey, which will be the equivalent of 3/4 cup of stuffing per pound.”

Apparently, the recipe has been around for years, and has become a staple at many-a-Thanksgiving table.