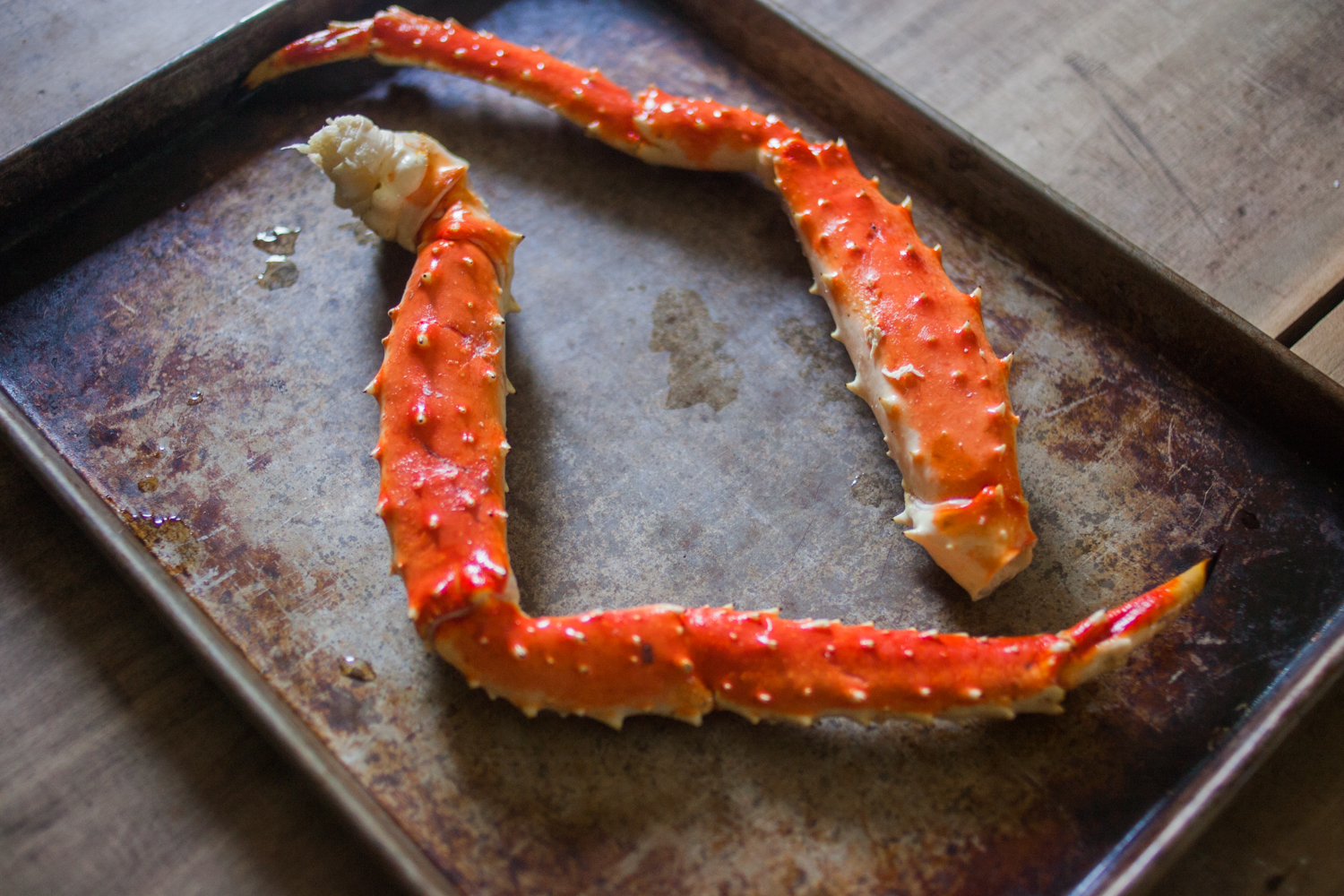 Just like how many Americans think they don't have accents, I used to believe I was totally free of regional snobbery… until I moved away from Maryland after high school.

See, I grew up just between DC and Baltimore, I've got roots in the Chesapeake Bay stretching back at least 4 generations, so I know—Maryland doesn't really have a ton of nationally-recognizable cultural touchstones, except for one thing: the Chesapeake Bay blue crab. Marylanders are also persnickety about preparation methods, of which there are only three acceptable options: deep-fried softshell on a sandwich; fried up as a crab cake with extremely sparse filler; and steamed with Old Bay, hand-picked and dipped in melted butter.

So when I left my hometown and found other crustaceans being touted as “crab,” my gut reaction was Man, that's not crab.

You know what, though? I love all kinds of seafood, so I was eventually willing to concede that here are a lot of other types of crab out there, and they were probably delicious. So I took it upon myself to try out Alaska's most famous seafood exports: the Alaskan king crab. 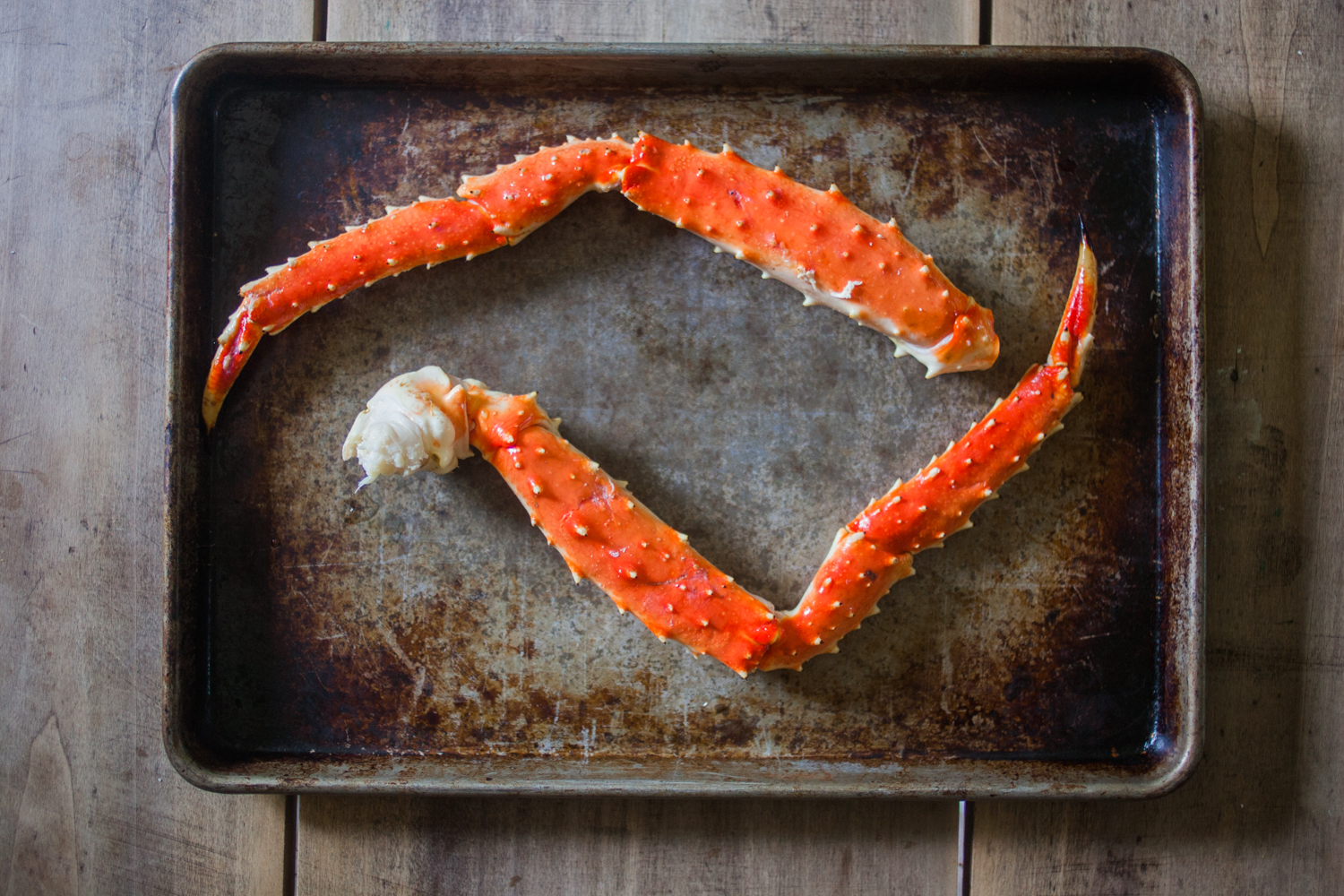 Like most crabs, the king crab likes to hang out and chow in the muddy substrate of the ocean floor. When it's young, it tends to stay toward the coast of the Bering Sea between Russia and Alaska, but when it matures, it likes to head out into the open ocean at average depths of 600 feet below the surface.

You might recognize king crab from the long-running Discovery reality TV show Deadliest Catch—commercial fishermen are the real deal, and the North Pacific is no exception. King crab ain't cheap to buy because it ain't cheap to catch; you can order king crab legs online, but grocery stores with a good seafood section carry them as well. (I got mine at a Whole Foods in Raleigh, NC.)

Regardless of where you get it, chances are pretty good you're not going to be getting junk, because it's kinda hard to fake crab legs. Unless you live near a crabbing community, you're going to be buying them frozen, since the crabs usually get cooked and and blast frozen either on the boats or immediately back on shore. They're usually sold by the cluster, but since I wasn't feeding a ton of people, I had the guy just break off a couple.

A thaw overnight in the fridge was enough to have them ready for lunch the next day.

You can eat the meat hot or cold, and there are several ways to heat it, all involving a gentle heat that mostly involves steam.

I slapped my legs onto a sheet pan and added a thin layer of warm water, covered the pan tightly in foil, and left it in a 350 degree oven for 8 minutes. All I needed was to heat it through, and this was perfect. 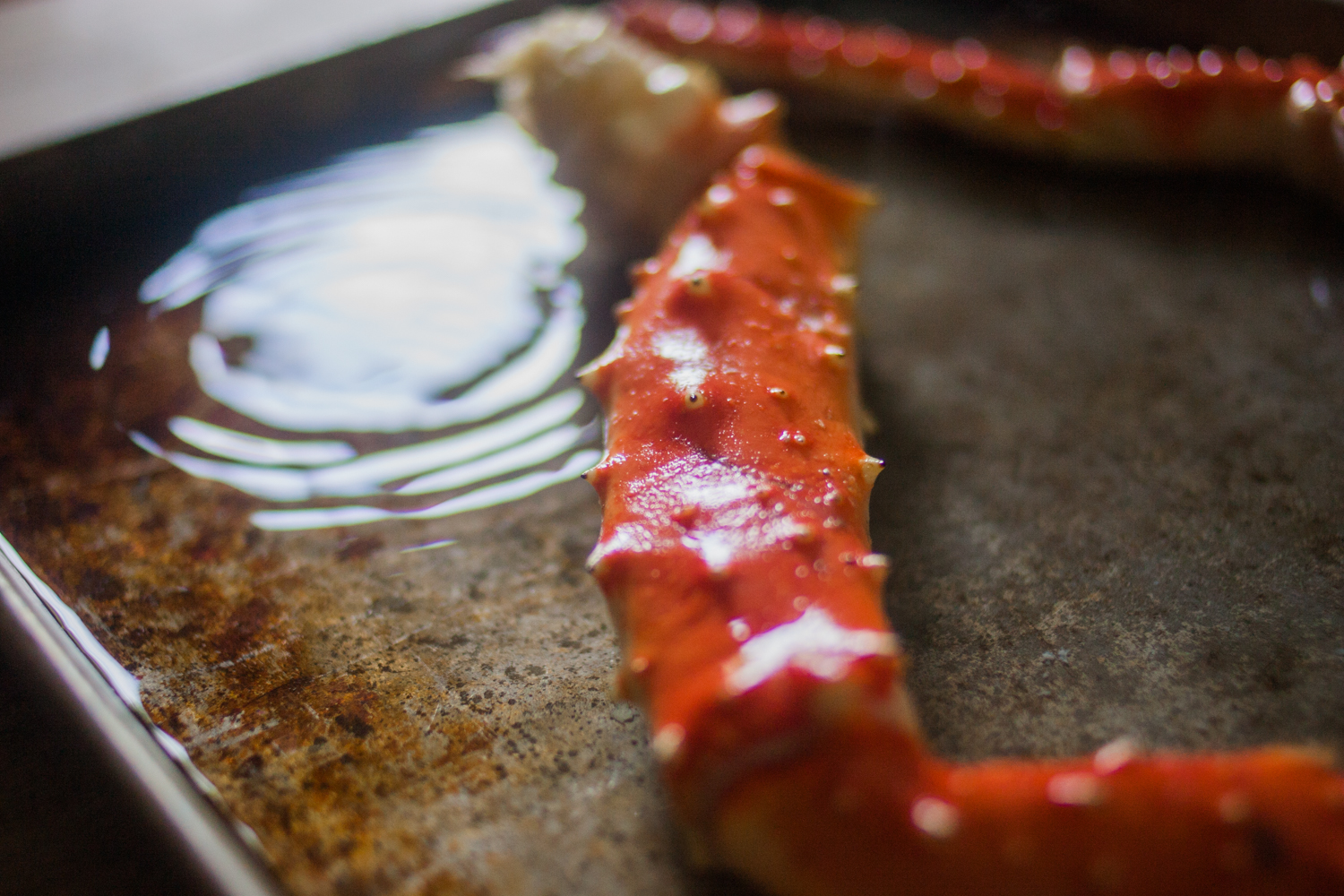 Since this was my first time preparing king crab, I really wanted the meat to play solo, so melted butter and lemon juice were the only accompaniment. 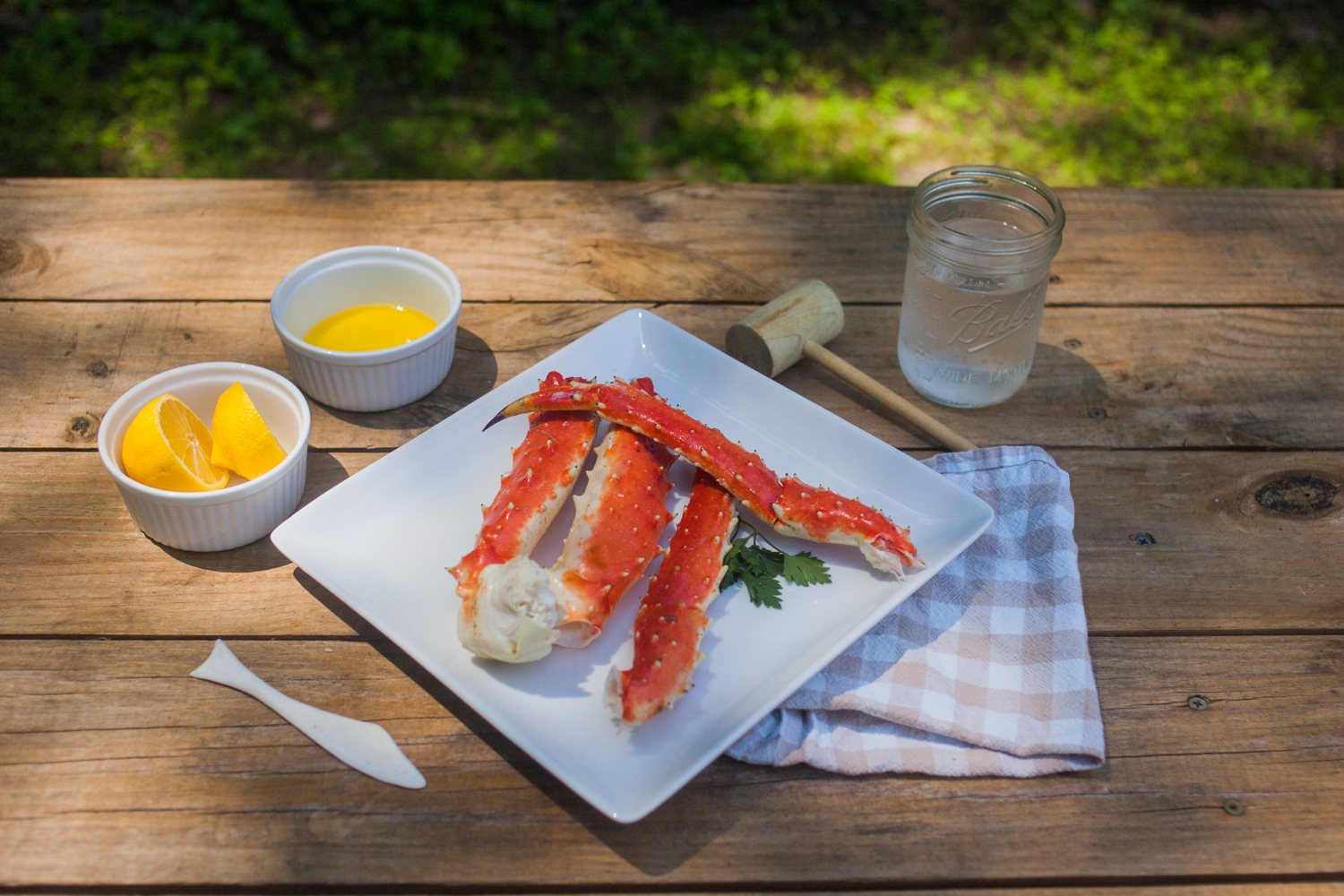 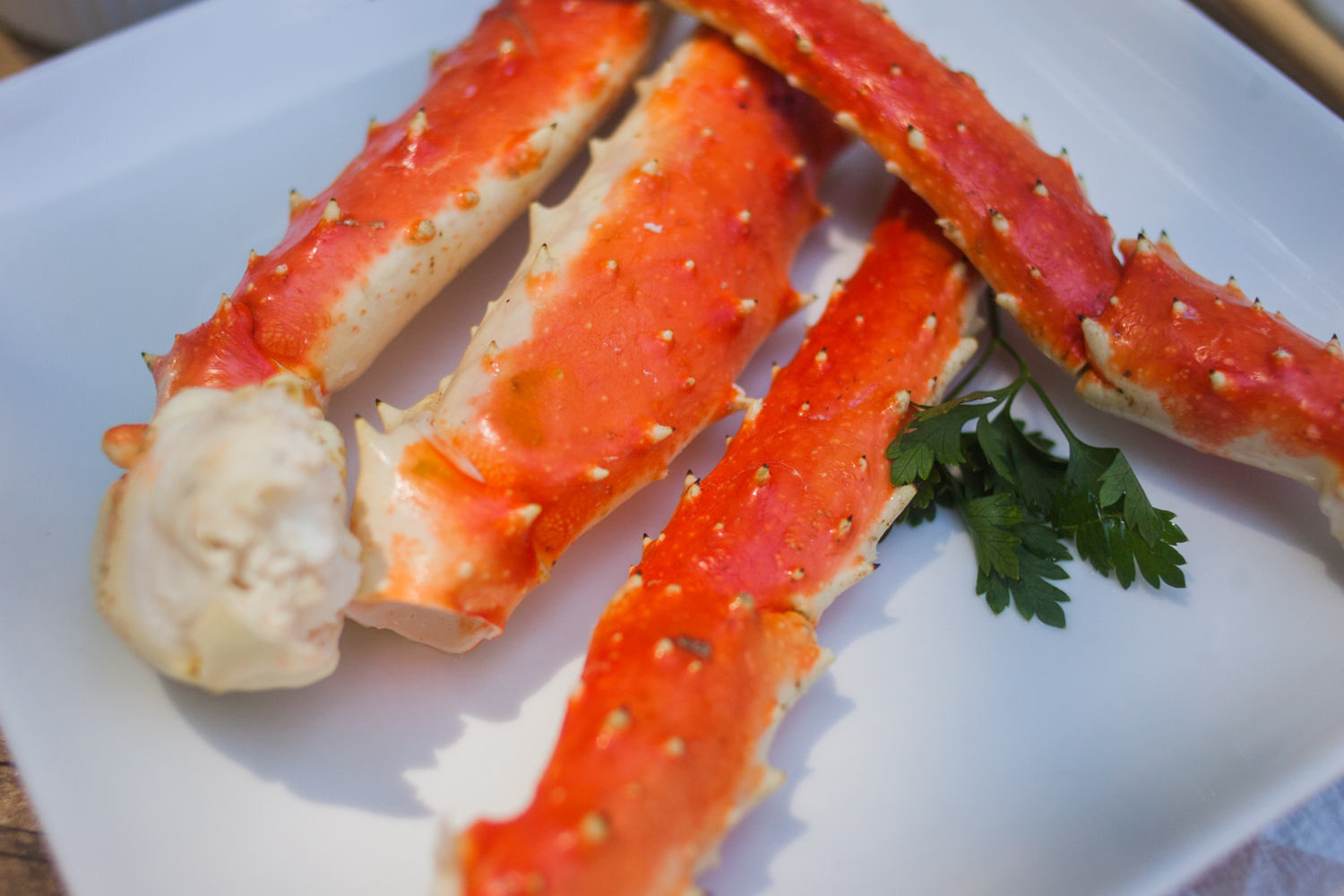 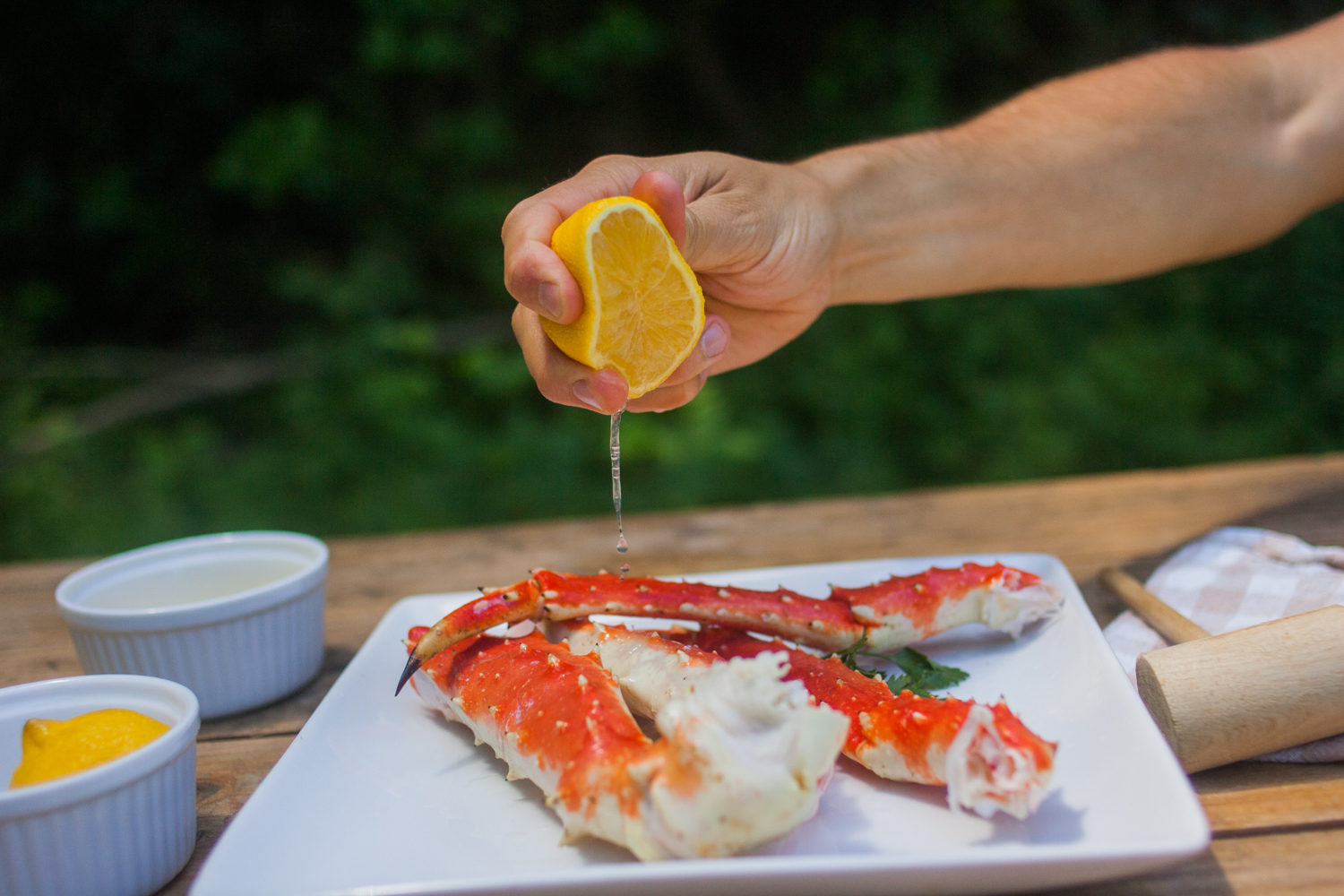 I wasn't really sure what I was getting into, and since I'm used to blue crabs' main claws being really hard, I brought out some tools: my old trusty crab mallet and a sweet hand-carved spreading knife my wife and I got as a wedding present from a friend in Kodiak. 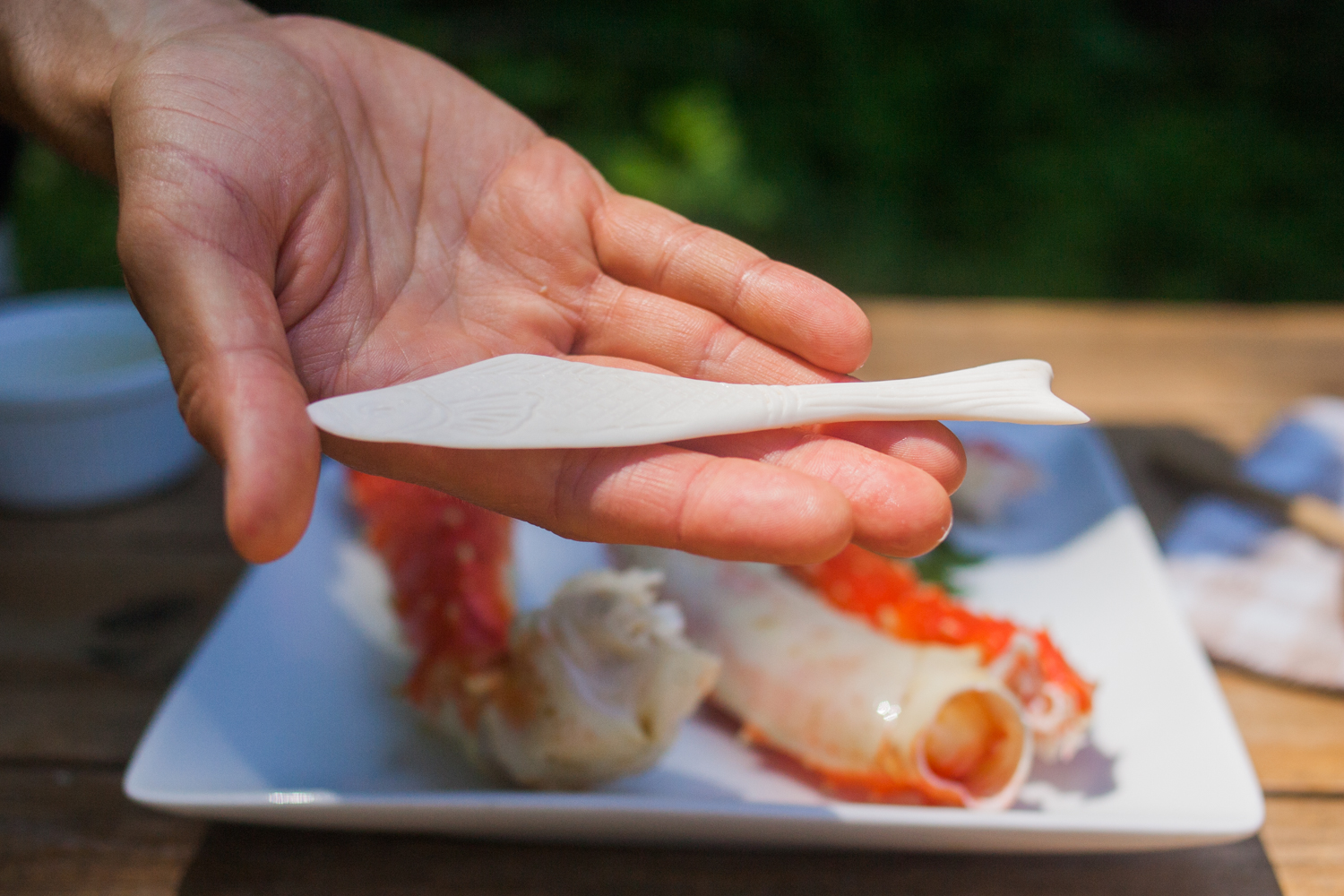 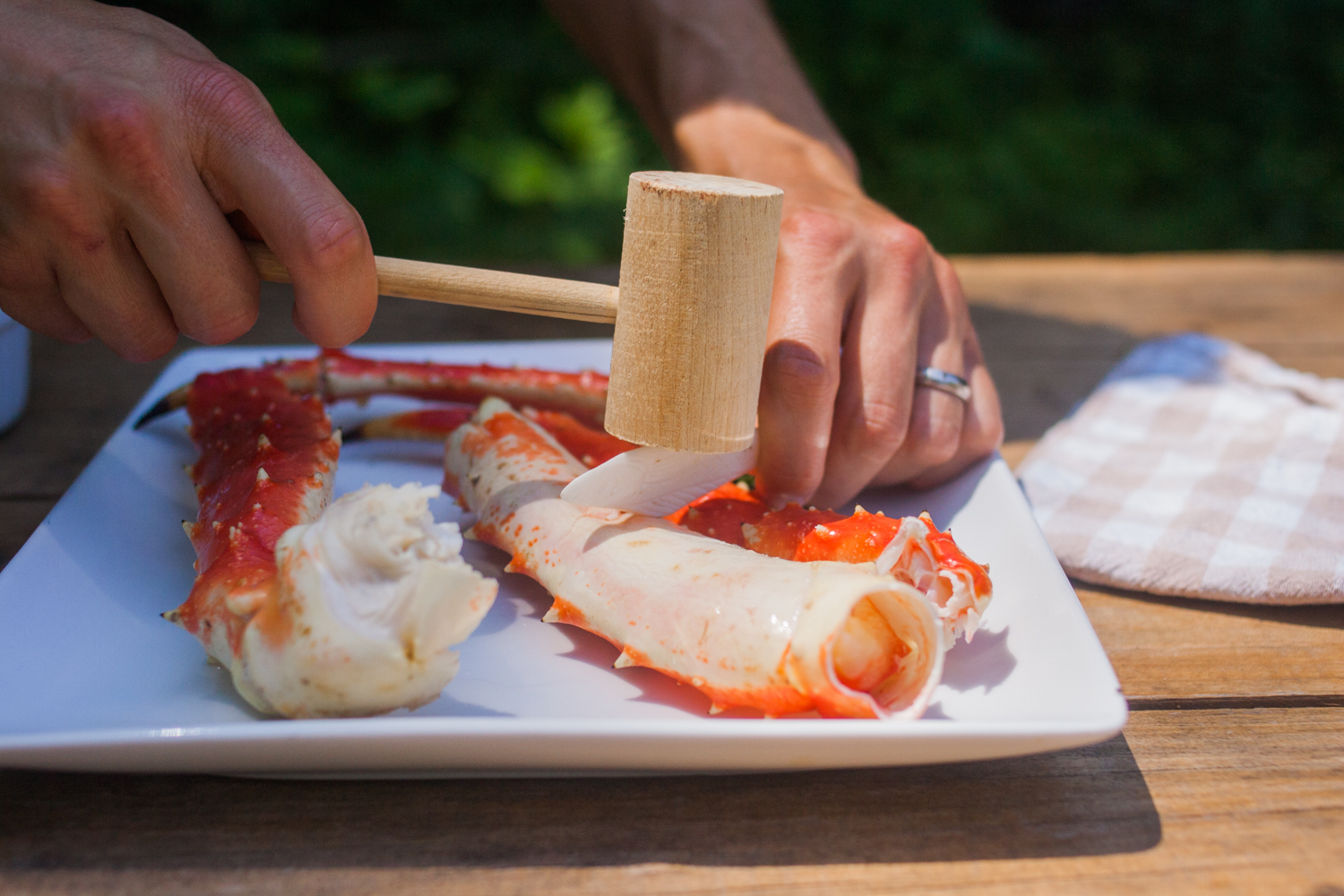 (It turn out that no tools are necessary, since the shells yield pretty easily to firm pressure.) 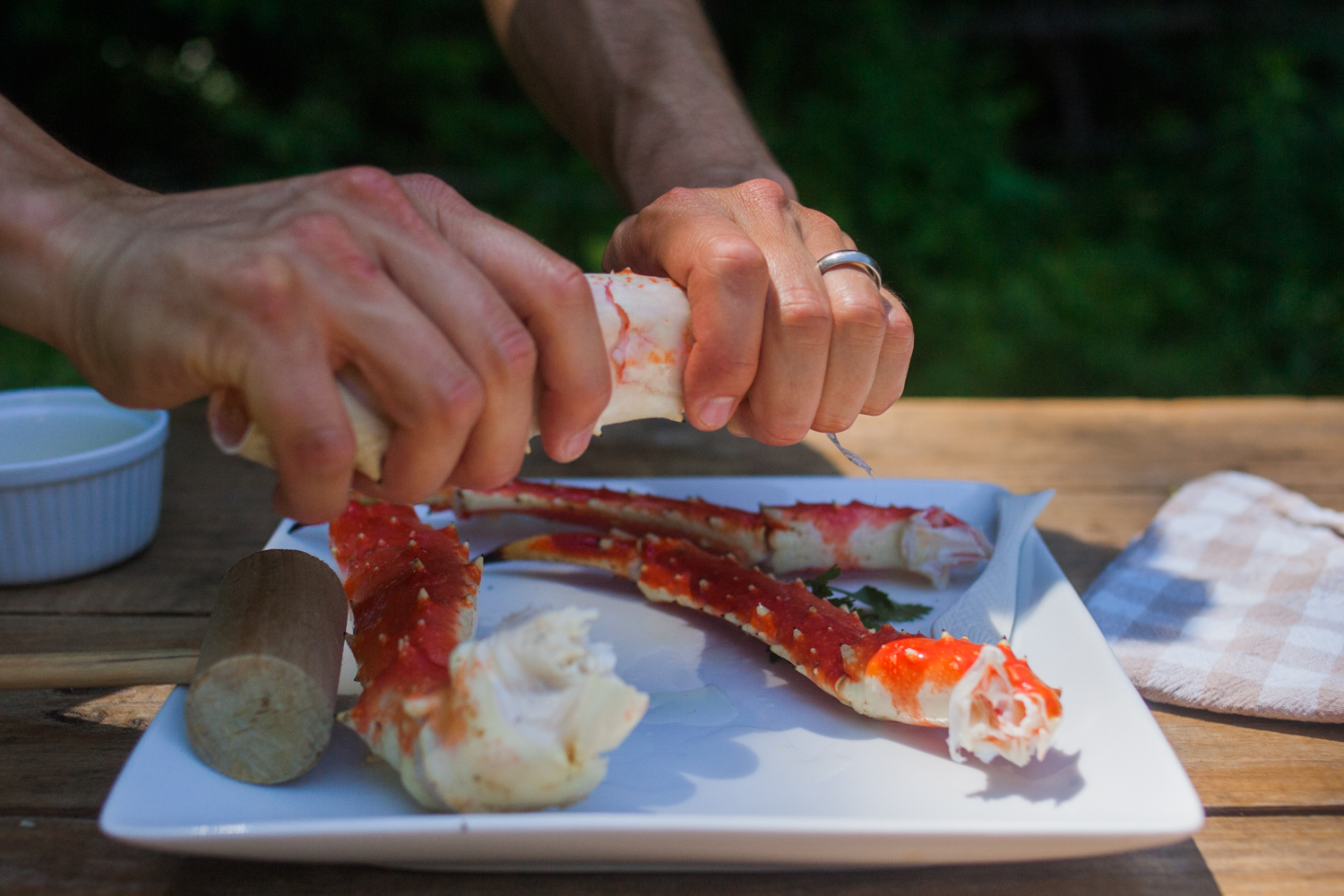 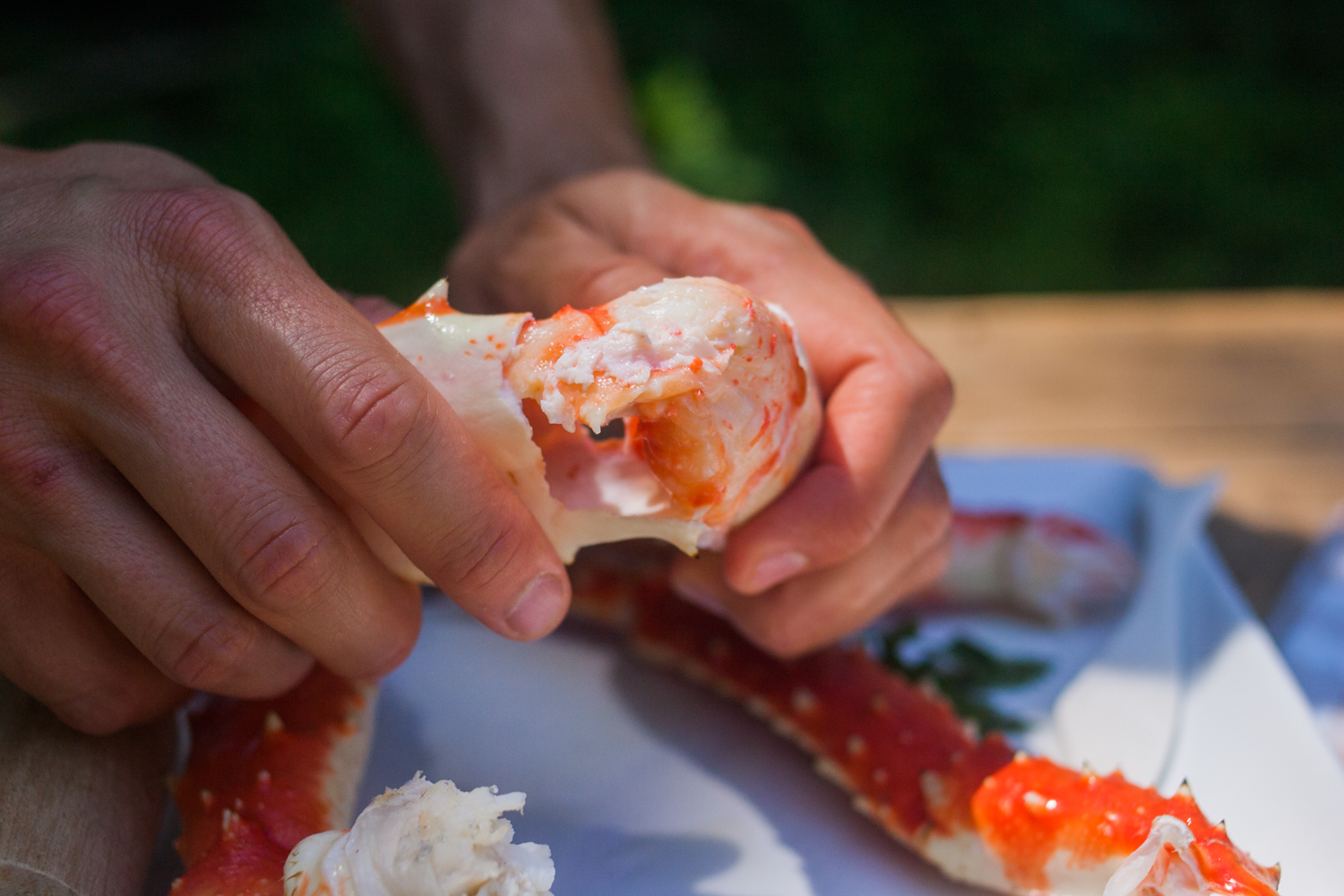 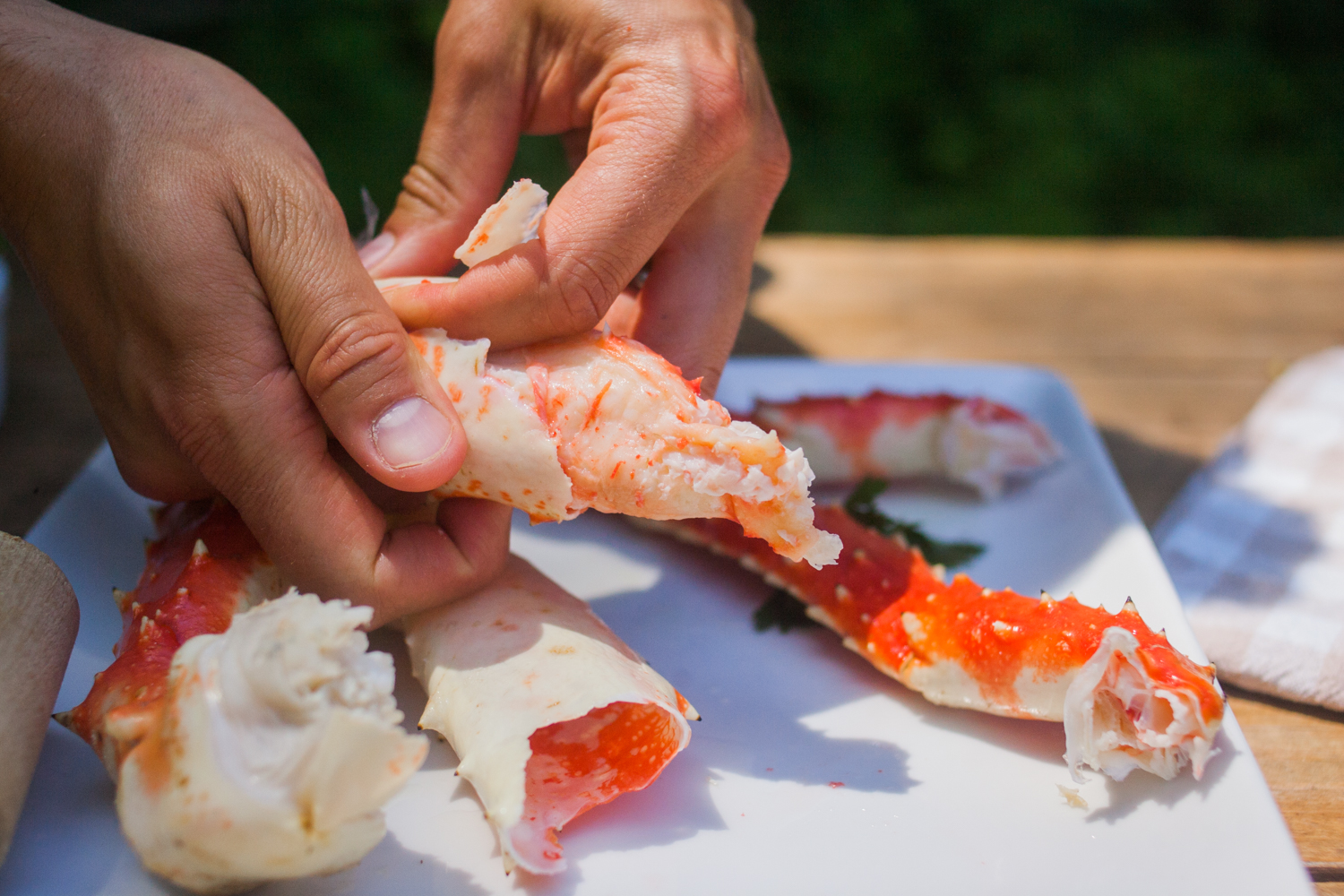 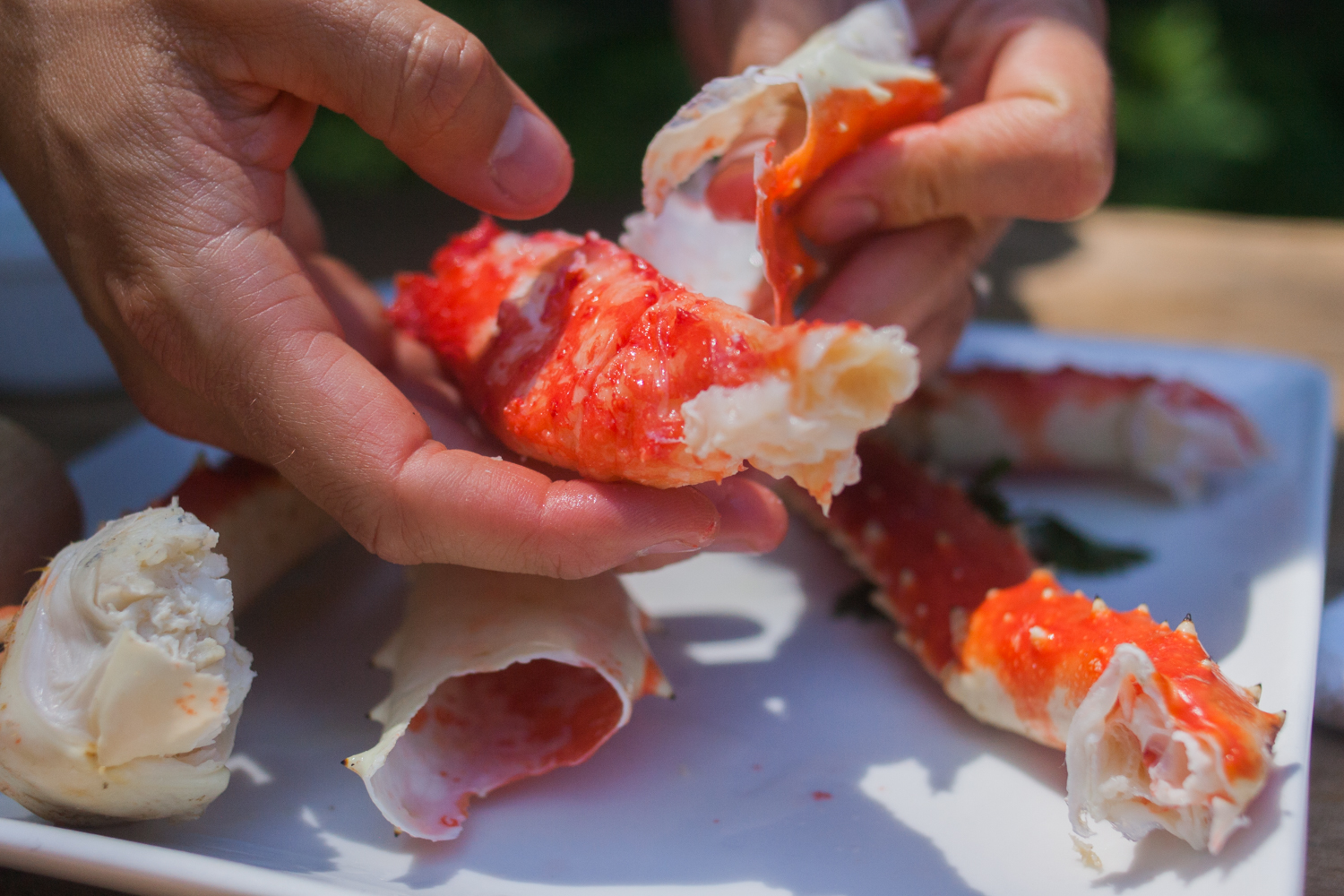 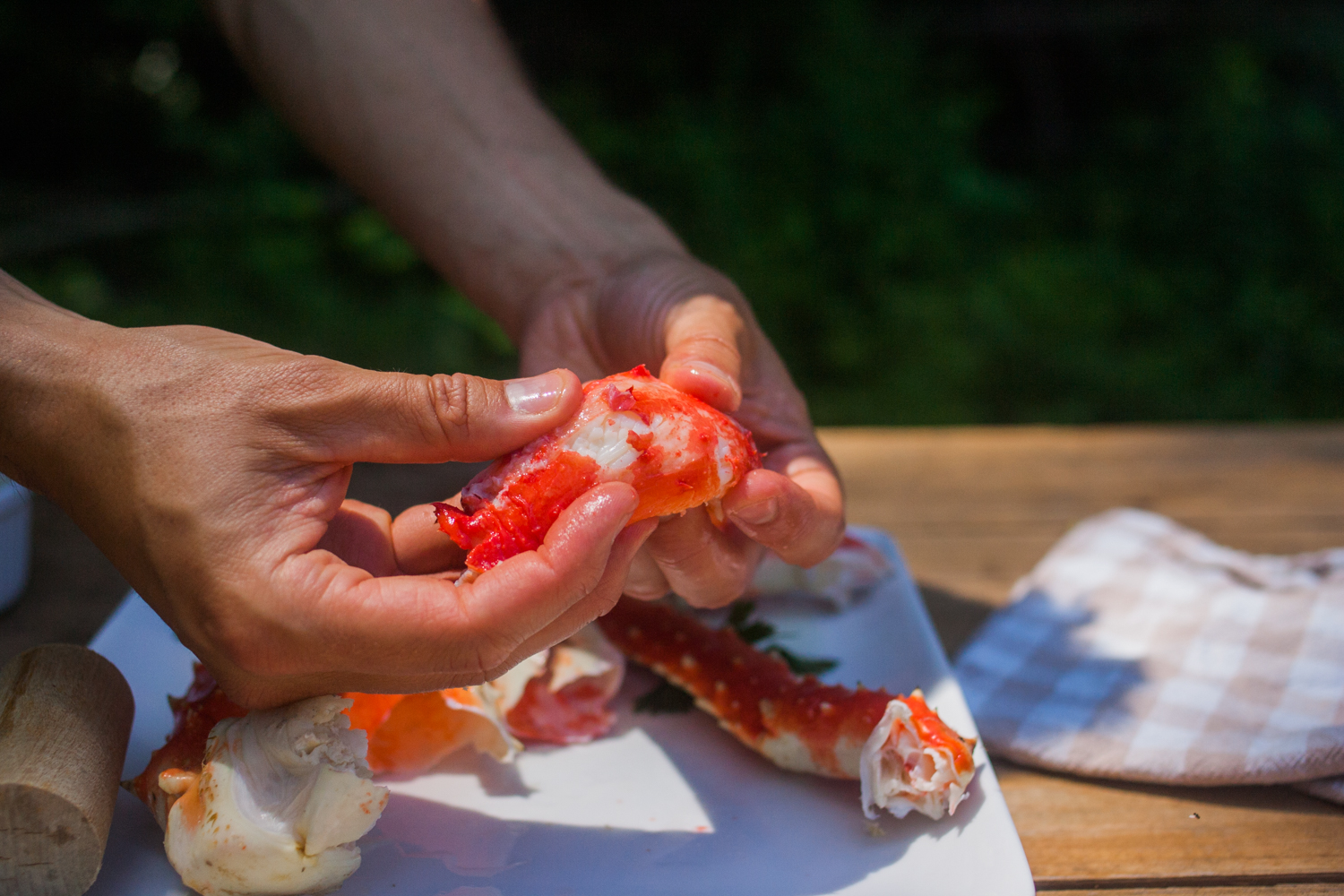 A dip in the butter… 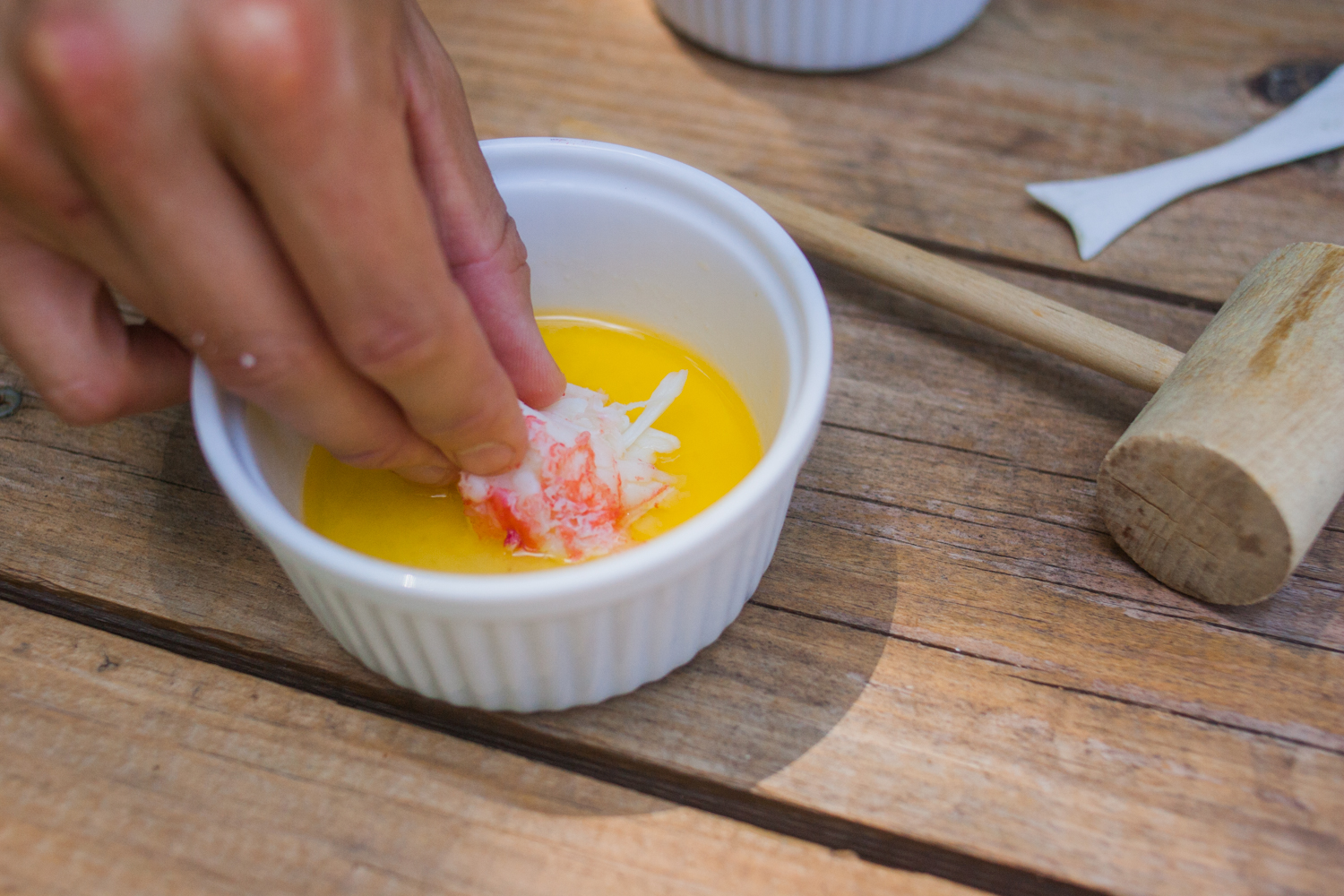 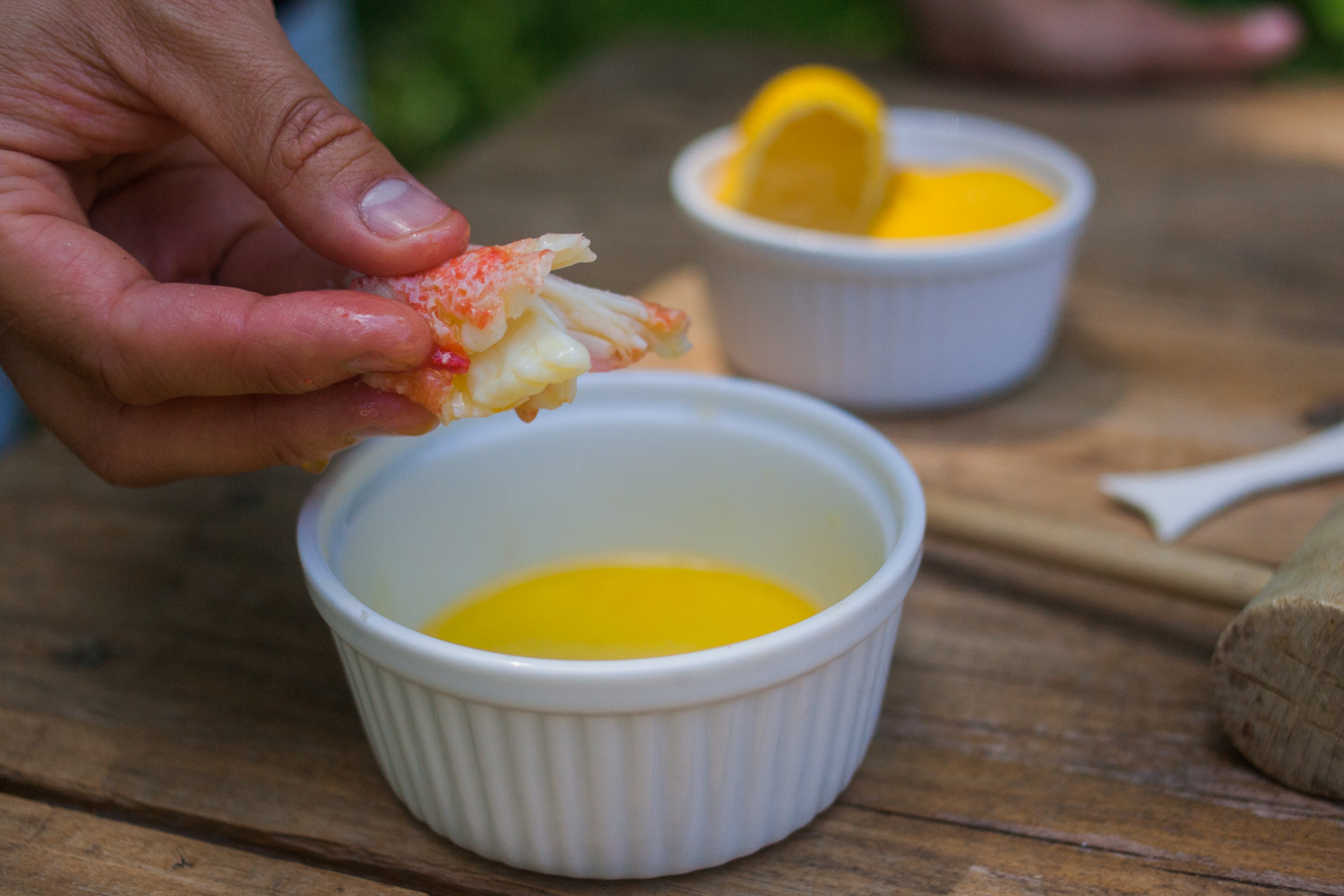 It's got that light, slightly sweet flavor that I can only stupidly describe as “crabby.” The blue crab meat I'm used to—especially the prized backfin lump meat—is a bit softer by comparison, so it was a bit like chomping into crabby-tasting lobster tail. (My family visited friends in Maine every summer when I was a kid, so I'm no stranger to good lobster.) However, if you had lied to me and said it was fresh from the Chesapeake I'd have believed you.

That being said, I couldn't resist hitting a couple bites with the stalwart standby seasoning… 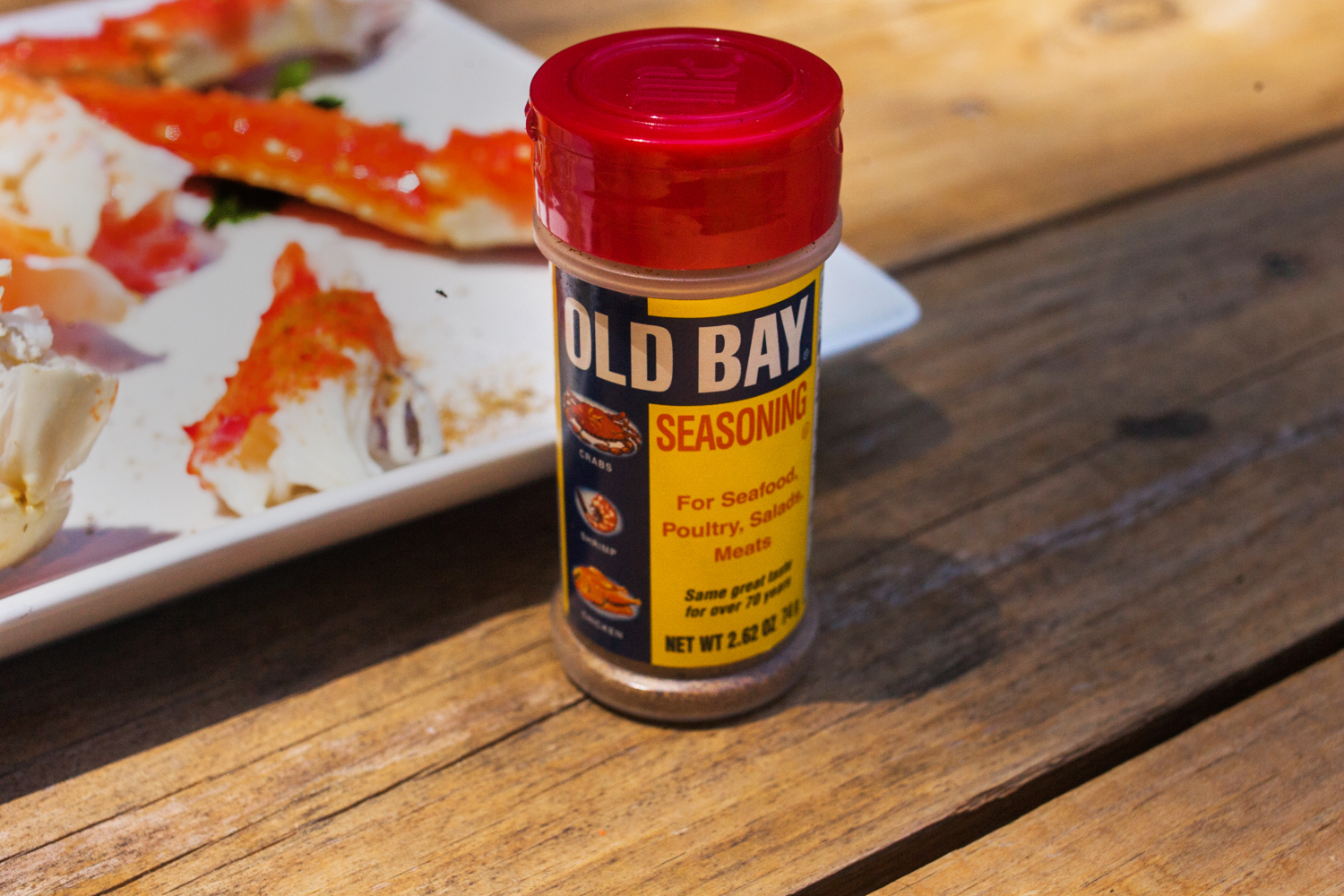