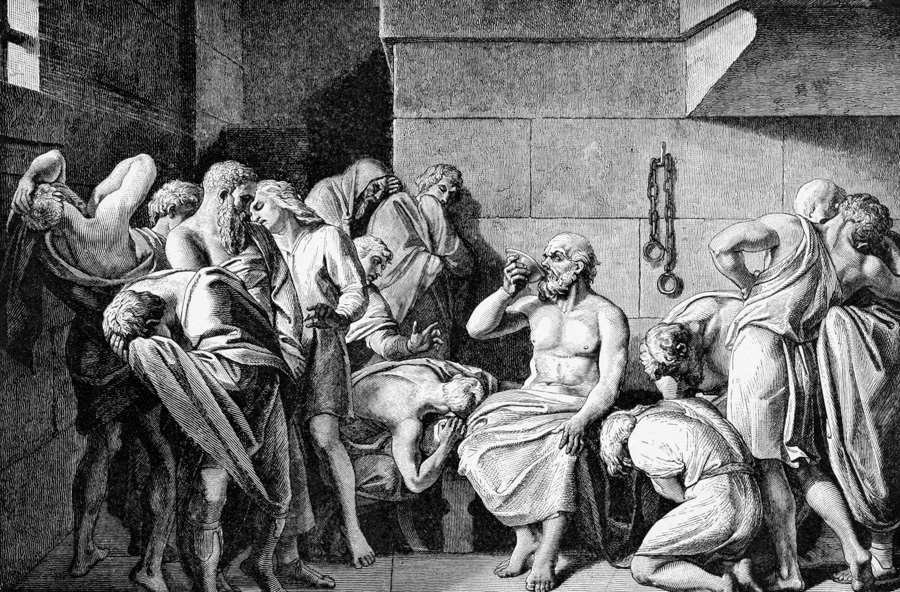 Here's something that is completely useless for your everyday life. It will not help you dress well, or create a perfect mothers day gift, or fix your shoelaces, or build a dynamically-planted garden, or anything of the sort. But if you are at a dinner party or out with friends or in a mixed group and you wanna bring out something funny, erudite and pretty out of the ordinary, nothing works like an unexpected joke from an ancient figure whose quotes usually end up chiseled into marble.

Fair warning: some bawdiness follows. Despite the editors of ancient manuscripts, real people in the ancient world weren't above off color jokes.

One of the most notable figures for ancient jokes and insults is Diogenes of Sinope––the most famous exemplar of Cynic philosophy and the kind of guy who (I imagine) had a sense of humor somewhere between that of Bill Maher and a filthy-mouthed old guy with no filter.

The most famous story about him is, without a doubt, the time he met Alexander the Great. When they were in the same city after Alexander's conquest, Alexander sought to meet the famous philosopher. He found a dirty man who had absolutely no interest in meeting the young conquerer who was, at that time, the most powerful figure in the Western world. When Alexander stood over Diogenes and asked if there was anything Diogenes would ask of him. (Mind you this was a guy who could have gifted him a city and also taken Diogenes' life with a simple command.) Diogenes remarked “yeah, can you move out of the way, you're standing in my sunlight.”

That kind of frankness is typical of Diogenes. But his fire only starts there.

The word “Cynic” means “dog” and it was a derogatory way to describe Diogenes' philosophy. One day, he was eating while in the public marketplace––something VERY low class at the time––a group of naysayers gathered to ridicule him, calling him “dog.” He responded, “If I'm the dog, why are you all surrounding me and grunting at me while I'm eating?” Boom. Roasted.

There was a similar situation where Diogenes was invited into the home of a very rich man. Now, if Diogenes could care less about one thing, it was material wealth. This guy definitely knew that and was having fn by pointing out how costly were all of his furnishings and the materials used to make what was basically a mansion. Without thinking, Diogenes spit right on the floor to clear his throat. The rich man, disgusted, remarked that his floor was actually quite valuable, and that Diogenes should find somewhere less honorable and worthy to spit. At this point, Diogenes looks him square in the face, hocks up a big loogie, and spits right in the guy's face.

Stories relate that Diogenes frequently had it out with Plato, who he deemed to be incorrect in his teaching of Socrates' philosophy. Plato famously tried to reduce how we defined a human being by characterizing a person as a “featherless biped.” Rather than go along with Plato's endeavor, Diogenes cracked up and showed up in the agora with a live, plucked chicken to pontificate on “Plato's human being!”

Diogenes got as good as he gave. At one point, Diogenes showed up to Plato's house and made a mess on his rug, to which Plato took exception. Diogenes relished shaming Plato by making a show of it, jumping up and down on Plato's “pride.” Plato sniped right back and said, “well, while you are trampling my pride, you're making sure that your pride (i.e., Diogenes' junk) is in full view of everyone.” Apparently Diogenes' scant tunic wasn't doing its job. Good one, Plato. Good one.

Without a doubt, the funniest person in the ancient world was Lucian of Samosata––a writer and orator who lived in the mid 100s AD. He has been characterized by one scholar as “the David Sedaris of the ancient world.” He was a master of comic dialogues, and there are whole, lengthy works by him that––in context––are knee slappers. But he also tells some good, short tales. Some of the best ones surround another Cynic philosopher, Demonax. This guy seems to have been a real wit in public.

At one time, a public teacher was going on and on about how learned he was––how he had been a student of EVERY kind of philosophy. He explained, “with Plato, I have run to the academy, with Aristotle, I have walked in discourse, with Zeno I have sat on the porches, and with Pythagoras (whose philosophy emphasized quiet contemplation), I have fallen into silence.” At that point, Demonax screams out, “Hey, dude! Pythagoras is calling! So shut up!”

Probably the funniest one-liner of Demonax comes when he comes across a very valuable ring that he stumbled across. He posted publicly that the owner should feel free to come to him and, if that person could correctly describe it, he would return it. Numerous people came and weren't able to describe it. Eventually, one very wealthy young man showed up who was the lover of a powerful man in the city. (The text isn't explicit about this, but you get the sense that this guy was well known as an attractive paramour with a long history of romancing older men.) He tried to describe the ring, but was WAY off the mark. Demonax responded, “oh you've no doubt lost your ring (“lost your ring” was a euphemism for a man losing his virginity), but you're also never going to get it back.”

Of course, these are all just jokes.

But I suppose there is something here. Its important, from time to time, to remind ourselves that our humor and our instinct to laugh at a joke and crack up at a quip––even where our instinct to have fun is more important than our instinct to make fun of someone else––is part of being human. It was so thousands of years ago, just as it is now. And then, as now, people liked telling the stories of jokes.

These handful are just the surface of ancient humor. But if a joke can still elicit a chuckle 2,000+ years later, its gotta be pretty good.

Allan
Allan Georgia lives in Cleveland, OH, where he consumes more coffee, whiskey and noodles than he should. But he's working on it. He loves thinking about big ideas and seeing the virtues in??very ordinary things. He writes on C/culture and religion when he is not trying to make things without burning??himself or smashing his fingers o[...]
Next Post
books history humor jokes lifestyle literature philosophy reading talk