From Roy Hobbs' “Wonderboy” in The Natural to Tom Cruise’ thinking bat in A Few Good Men, baseball bats hold a special place in the American masculine consciousness. A versatile weapon on the field, the baseball bat embodies an element of the American dream wherever it goes. The lone batter, a man himself against an entire team, hoping to hit it big.

Here at ManMade, we’ve taken the time to examine the history of the baseball bat and to trace some of its manufacturing history over the years.

As a new pastime born out of ancient games in new lands, both the game of baseball and the requisite equipment were constantly evolving. The rules shifted from region to region with players looking to exploit the continual changes as the game’s advantages vacillated between pitcher and batter. 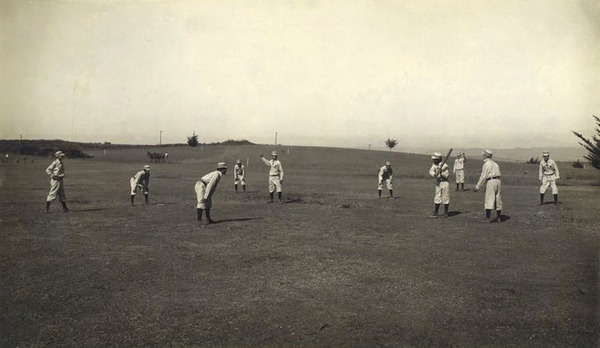 Prior to 1887, batters were allowed to request a high or low pitch. But as this practice became outlawed, pitchers began experimenting with all sorts of new pitching methods to throw off the batter in the attempt to be a moment misunderstood. Curveballs, knuckleball, and even spitballs (for a time) became staples of the pitcher’s arsenal and batters responded in kind by experimenting with a variety of baseball bat shapes, sizes, and materials. At this point, nearly anything was fair game.

In fact, there were no singular baseball bat manufacturers. As a game popularized by farmers and rural Americans, the first baseball bats were fashioned out of axe handles and wagon tongues and usually carved with simple hand-tools. Every player tried his best to craft the perfect, mystical bat that would rebuff the pitcher’s misleading pitches and get a man on base.

The only restriction on baseball bats at this time was the result of an 1859 Professional National Association of Baseball Players Governing Committee decision that bats could be no larger that 2 ½ inches in diameter. Length restrictions (no longer than 42”) were not put in place until after the Civil War, although they are still the length restrictions to this day.

As Ben Walker points out, it’s important to understand early batters’ strategies as they relate to the origins of the game. Developments in baseball bats significantly out-paced the adoption of baseball gloves (considered effeminate by early baseball pioneers). As a result, fielders were much more likely to make simple mistakes, and a batter’s effort was better focused on making calculated contact that would steer the ball where he wished, rather than betting it all and swinging for the fences. 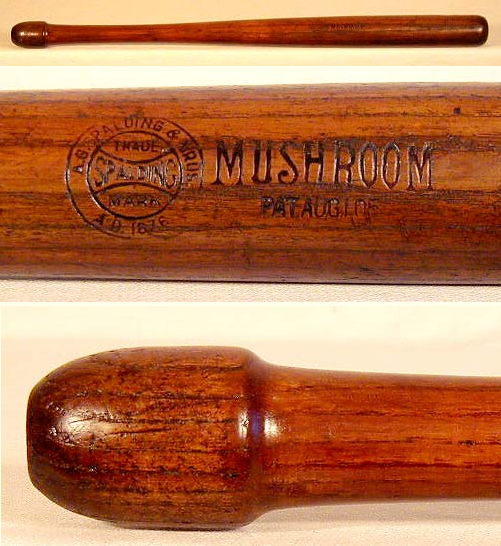 A number of early batters like Ty Cobb employed a split-hand approach, which made for greater control when batting. Many of these split-hand batters used mushroom bats knowing that the added weight in the handle might also increase their control in the same way that the split-hand approach worked. The mushroom bat pictured above was made in 1905 by Spaulding and was recently auctioned off by the Sports Memorabilia Museum.

In a similar attempt to gain greater bat control, second baseman (and long-time Ty Cobb rival) Napoléon “Nap” Lajoie designed what quickly became known as the Lajoie bat (pictured above). The bat featured a ring of wood known as the “shoulder” around which batters were supposed to wrap their hands. This again was believed to grant greater control and many early players adopted the bat in the hope that they could emulate Lajoie’s outstanding batting stats.

Perhaps one of the most unique bats ever fathomed was this design, first patented by Emile Kinst in June 1890. Kinst’s patent states that the objective of his bat was “to provide a ball-bat which shall produce a rotary or spinning motion of the ball in its flight 'to a higher degree than is possible with any present known form of ball-bat, and thus to make it more difficult to catch the ball, or, if caught, to hold it, and thus further to modify the conditions of the game…” 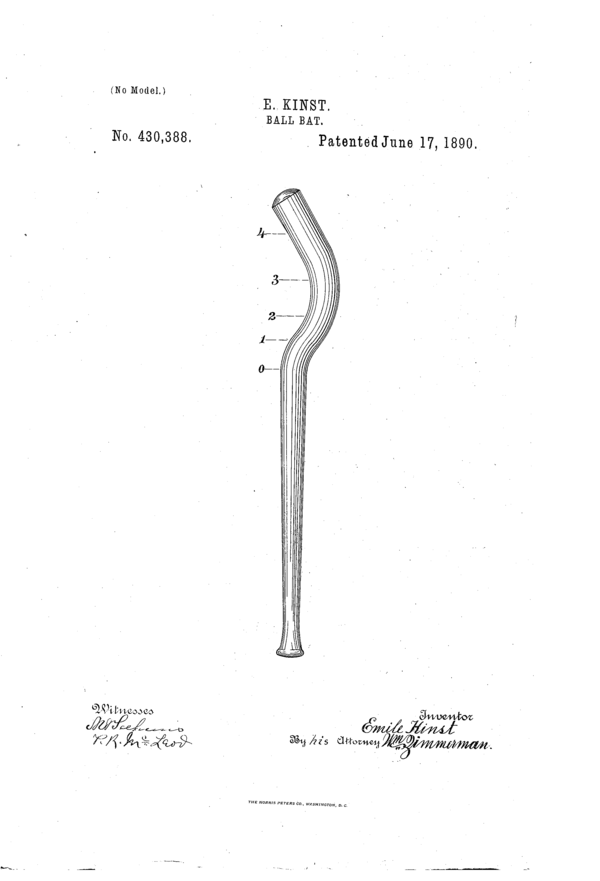 Kinst had plans to create and distribute as many as 400 of these “banana bats” as the design became known, however very few seem to ever have been made. The one pictured above belonged to White Sox catcher, Billy Sullivan Sr. (pictured below with the same bat) and the bat itself was traced down from obscurity by David Stalker (pun?). 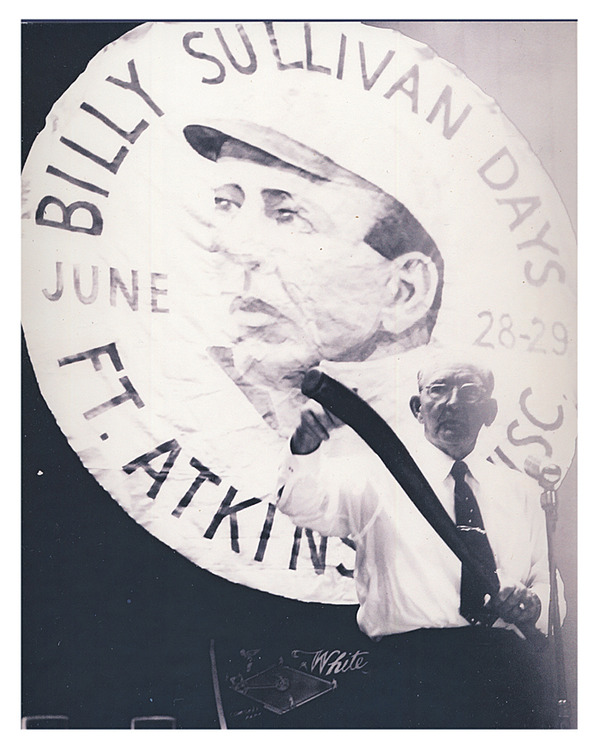 By 1893 however, the Major League Rules Committee had increased the limitations on bat designs and Kinst’s model was rejected from major league play. Not long after, baseball gloves became the standard equipment of the game and batters had to again adapt their style of play.

Enter Babe Ruth. A new kind of hitter, Babe Ruth swung for the fences every chance he got. The crowds loved this style and baseball attendance grew rapidly in the wake of the First World War. And when the Sultan of Swat wanted a little extra batting power, where did he turn…?

The Legend of The Louisville Slugger

Unquestionably the most recognizable of all bat designs, the Louisville Slugger has a famed and storied past. The legend begins in the 1880’s with John A. “Bud” Hillerich (pictured below in the doorway with his father), a seventeen-year-old woodworker who had recently begun working in his father’s woodshop in Louisville, Kentucky. 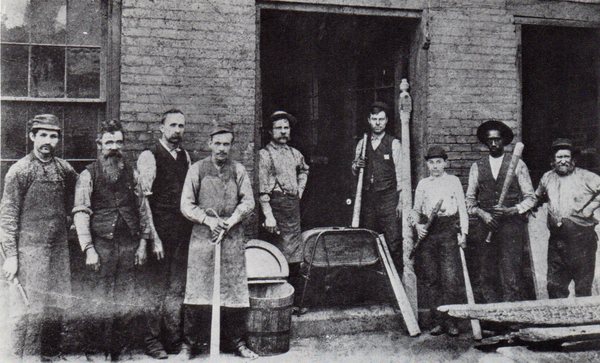 Bud himself was an avid baseball player who slipped away from work one afternoon in 1884 to watch his favorite major league team, the Louisville Eclipse, play ball. It was during this game that the Eclipse’ star player, Pete “The Old Gladiator” Browning, broke his bat in the midst of a merciless batting slump. After the game, Bud invited Browning to his dad’s woodshop to try and craft a new bat. The two worked side-by-side late into the night, with Bud carving and Browning offering advice and taking practice swings. The next day Browning hit three for three and a legend was born. 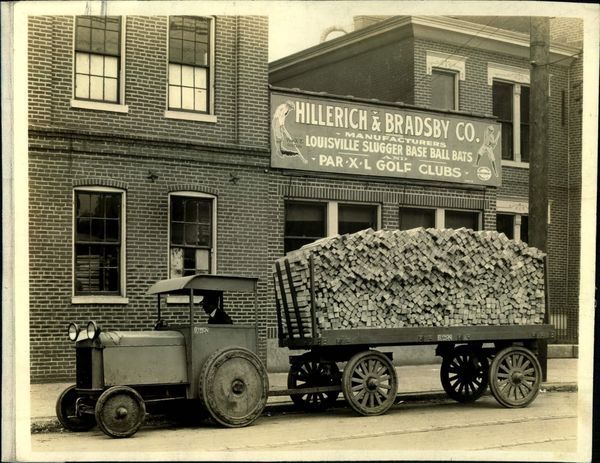 The Hillerich shop was quickly overrun with Eclipse players seeking their own version of the “Falls City Slugger” as it was originally dubbed. In the beginning, Bud’s father didn’t see a future in the baseball bat business and even started turning players away. Eventually, he changed his mind as the flood of demand from players of opposing teams came pouring in.

Around this time a number of other independent bat-making companies arose, but none could compete with the Hillerich’s. Each “Slugger” was different, crafted to suit the specific desires of the individual players and utilizing the Hillerichs’ knowledge of baseball and materials. Their bats were constructed out of top quality wagon tongues, white ash, and hickory, although hickory was quickly abandoned due to its density and weight. 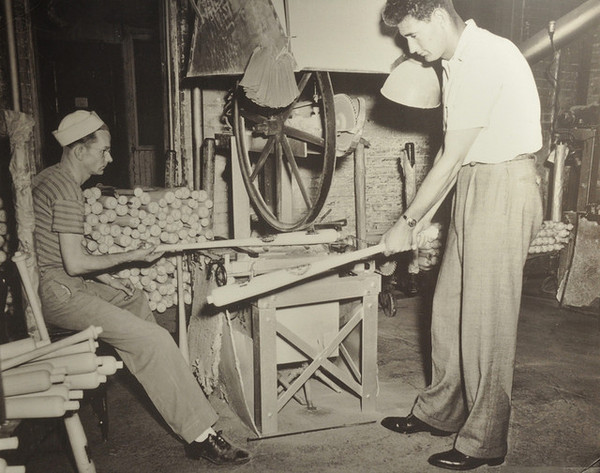 Bud registered the “Louisville Slugger” with the US Patent Office in 1894 after taking over the family business, but the company continued to innovate with different bat varieties. Since bats were originally constructed on an individual basis, players had begun the practice of carving their names into their bats or giving them personalized names.

In 1905 Hillerich & Bradsby (as the company is now known) hatched a game-changing marketing plan by signing a contract to have Hall of Famer shortstop for the Pittsburgh Pirates Honus Wagner’s signature burned into his Louisville Slugger. This practice has since been followed by nearly every major sports franchise to this day.

As baseball became the nation’s favorite pastime and form of entertainment in the wake of the First World War, the Louisville Slugger took off. It became the preferred bat of major hitters Babe Ruth, Ty Cobb, and Lou Gehrig, and in 1923 the Louisville Slugger was the number one bat in the league. Over the years, there have been a number of competing bat manufacturers but few of these have posed a serious threat to the Slugger’s corner on the market. Recently however, Hillerich & Bradsby has admitted that the company has been slowly ceding ground to Marucci Sports, which was founded out of a backyard shed in 2002 by LSU athletic trainer Jack Marucci. Today, Hillerich & Bradsby claim that over 60% of major league bats are still Louisville Sluggers, although Marucci hotly contests this statistic. 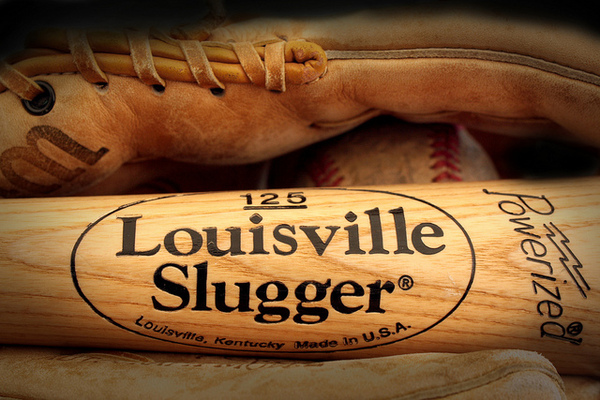 Almost every bat you purchase will have the manufacturer’s trademark engraved or printed on the bat. Following in the tradition set by Hillerich & Bradsby, the trademark is placed at a ninety-degree angle from the natural grain of the wood, which is regarded as the strongest part of a wooden bat. Therefore, you should practice your swing (since every player’s is different) and determine where you should hold the bat so that the trademark faces up at the full extant of your swing. This will ensure your bat lasts longer and it’s been believed to give you greater hitting power.

On the fateful night of the Louisville Slugger’s construction, Bud Hillerich chose to make his new design out of northern white ash – which has stayed the preferred material to this day. White ash is used for its combination of hardiness, strength, weight, and the general “feel” of the wood. Hillerich & Bradsby currently selects its white ash from trees over 50 years old in their specialty forests in New York and Pennsylvania. The wood is then dried to a specific moisture level for a period of six to eight months before being passed on to the crafting process. Ten percent of the best quality wood is selected out for professional bats and the rest goes on to be made for consumer markets.

In talking about the history of baseball bats, there has to be some mention of metal bats. Metal bats have been around since William Shroyer first filed his patent in 1924, but didn’t come into common use until the 1970’s when Worth Sports produced a one-piece aluminum bat for amateur and little league play. A couple years later, Easton came out with an improved model that greatly increased their popularity. Originally constructed for their incredible durability, it’s become apparent that they offer many aerodynamic advantages over wood. The hitting power that can come from properly using a metal bat is so high in fact that the major league has not allowed their use since a pitcher literally might not have time to duck a line drive coming his way.

Like the Slugger craze that followed Pete Browning’s three for three, the 2001 MLB season saw Barry Bonds hit a record 73 home runs in a single season. When it was revealed he had used a maple bat (something no one had done in the major leagues prior to 1996), players became rabid to try some new maple. In fact, in 2010 about half of major league players were using maple bats. Maple bats tend to last longer and have been shown to increase hitting distances. Maple bats are naturally denser and bend less with the impact of a baseball, and some batters have commented that they prefer not having to compensate for the slight bend they encounter with a bat made from white ash.

As you can see, baseball bats come in all shapes and sizes, and one player may use many bats in a single game. But even with a steep manufacturing history of endless variations, there is still plenty of room for the rogue designer. 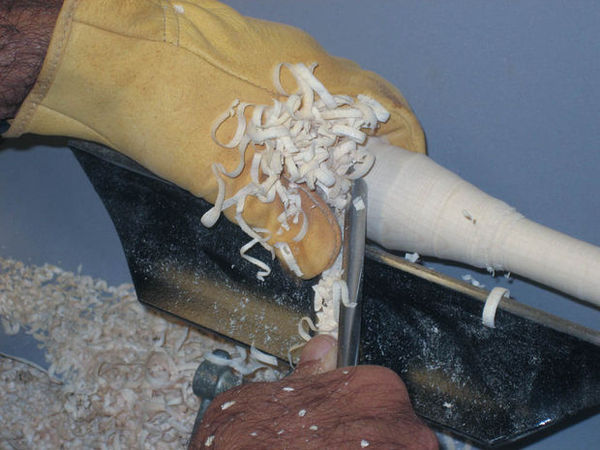 Carlbass of Instructables.com has this very informative, step-by-step guide that looks much easier than you might initially think. So get on out there and stake your claim on this great American tradition. 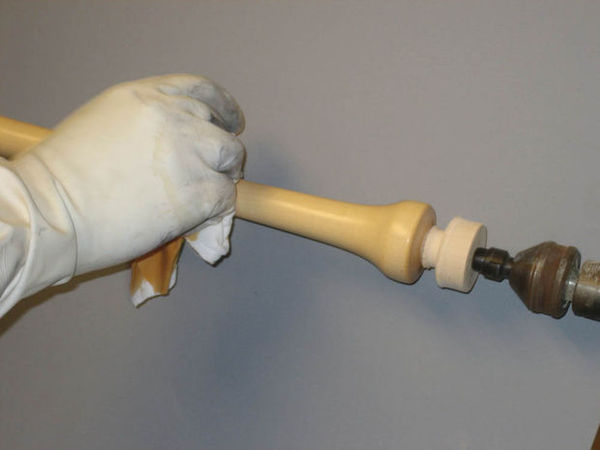 Or if you’re too exhausted from all this reading, at least reward yourself by watching this. 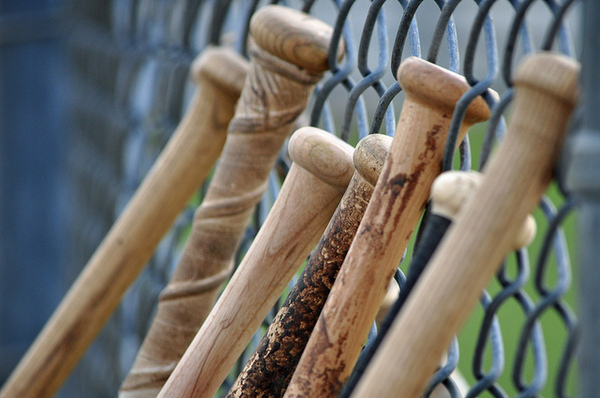