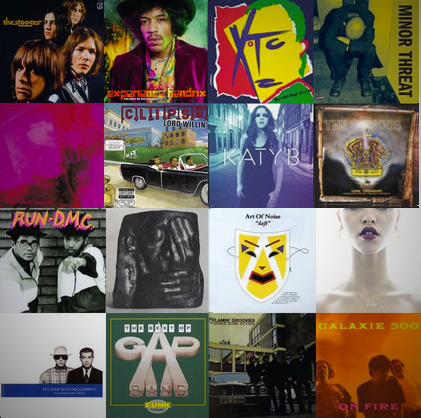 For the past few weeks, The New Yorker magazine’s music critic, Sasha Frere-Jones, has between tweeting the names of (seemingly) random-but-awesome song names and images, all tagged #perfectrecordings. Then, this week, he shared links to a series of free Spotify playlists, Vol. 1-5, of what he considers, well, perfect recordings. The Guardian followed up, asking about the project. “It’s an obviously ridiculous idea. About a year ago, in a meeting, the word ‘perfect’ came up, and I thought it was so idiotic that it sort of tickled me. But for some reason, perfect bothers me a lot less than ‘best’.”

He says, “There’s a play between the personal and the general here,There were a few rules [to making my selection]. It had to be something that I played a lot and was a part of my life. Ideally it was a record that I got when it came out, and I saw its impact. Also, it has to be a song that is always better than your memory of the song. It’s all very idiosyncratic.”

Each playlist contains 40 songs, and there’s some real gems here from artists you love, and plenty from many you’ve never heard of.

Makes a pretty fine weekend playlist. Find the interview with the Guardian here, and the playlists at Spotify: vol 1, vol 2, vol 3, vol 4,  and vol 5.