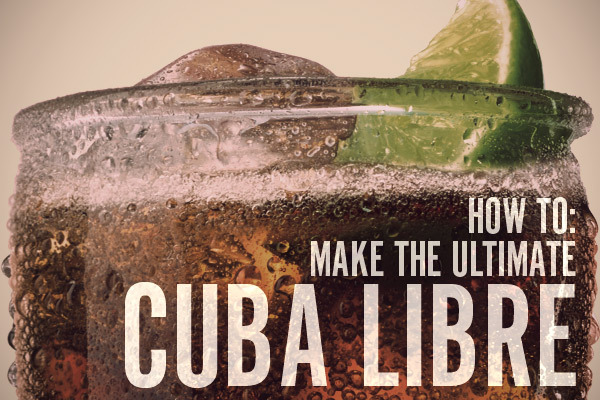 This Friday – August 16th – is National Rum Day, so to celebrate the summer, give one of the original rum cocktails a try: the Cuba Libre. It’s delicious, dead simple to make, and perfect for enjoying all weekend long.    To dig deeper into about the history of the drink, I turned to the experts at Bacardi rum. I figured they probably knew a little bit about it. Here’s what I learned:

The Cuba Libre was created in 1900 by American soldiers gathered in Havana after the Spanish-American War. The cocktail was named after the Cuban rally cry for independence, “¡Por Cuba Libre!”.

More commonly called “Bacardi and Coke,” the authentic Cuba Libre cocktail is actually made by squeezing a lime over a glass of ice before mixing  one part BACARDI Gold rum and three parts cola. Bacardi rum can be found in the earliest documented recipes  of other legendary cocktails such as the original Mojito and the Daiquiri.

So, this recipe varies a bit from our tried-and-true highball ratio, so I guess that’s what makes it a proper Cuba Libre, not a rum and Coke.

Fill a tall glass with cubed ice. Squeeze and drop a fresh lime wedge into the glass. Pour in BACARDÍ Gold® rum and top with chilled cola. Stir gently and top with remaining lime wedge.