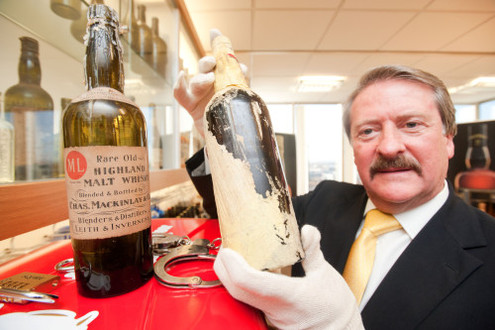 In 1907, Ernest Shackleton and his crew set out to reach the South Pole, taking all the gear, food, and fuel necessary to keep the team alive in the extreme climate. The Antarctic explorer also brought something else with him, cases of brandy and whiskey, which the team was forced to abandon in the ice in 1909. Because of the unique climate and intense temperatures, these cases remained mostly intact, and were re-discovered in 2010. They were taken to Scotland for recipe analysis, and then returned to their Antarctic location last week.

Three bottles of rare, 19th-century Scotch found beneath the floorboards of Ernest Shackleton’s abandoned expedition base were returned to Antarctica on Saturday after a distiller flew them to Scotland to recreate the long-lost recipe…But not even Prime Minister John Key of New Zealand, who personally returned the stash, got a taste of the contents of the bottles of Mackinlay’s whiskey, which were rediscovered 102 years after Shackleton was forced to leave them behind….Bottled in 1898 after the blend was aged for 15 years, the Mackinlay’s whiskey was among three crates of Scotch and two of brandy buried beneath a basic hut that Shackleton had used during his adventurous 1907 Nimrod excursion to the Antarctic…

From Scotland to Antarctica to New Zealand to Scotland and, now, back on the rocks in Antarctica. Cheers, Shackleton.

A Rare Scotch, Back on the Rocks  Read more about Shackleton’s spirit stash on The New Yorker blog.