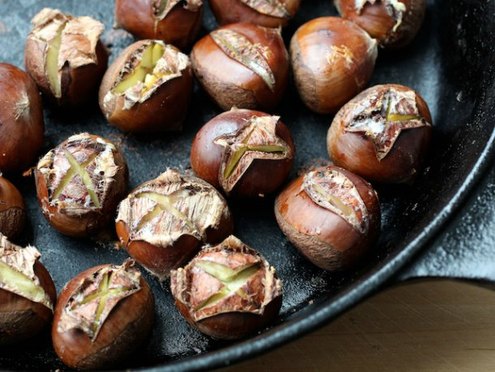 I’ve never had a sugarplum, and I’m still not totally sure what figgy pudding actually is, but of one traditional holiday treat I’m convinced: roasted chestnuts are amazing. And not like in that quaint, old timey “I could see why people thought these were tasty before we figured out how to make more delicious things” (like hard candy or [in my case] jelly beans), but in a “this things are awesome no matter what century it is.”

Got an open fire? Go for it. But since most of us aren’t quite used to heat control with a giant blazing inferno, roasting chestnuts in the oven is more than an okay way to go. If you’ve never had one, the trick to roasting chestnuts is to make sure they have that telltale X-shaped score in them to allow steam to escape. The latest issue of Bon Appetit suggests using a utility knife and clean blade rather than a traditional kitchen knife, and I’m excited to try that technique this year upon roasting.

The thing that surprises most first-time chestnutters – these things are savory, not sweet. I mean, of course, they’re nuts, but they actually don’t take too well to candying, like almonds or walnuts. To me, the taste is reminiscent of roasted turkey – super meaty, with a great texture.

Roasted straight up, they’re awesome. But add a little butter dipping sauce and enjoyed with some brandy, sherry, or whiskey? Amazing. This year, I’m going to try Marvin Gapultos’ recipe. He treats them as “bar bites,” intended to accompany the enjoyment of spirits, which is how I like ’em best. Get the recipe at: