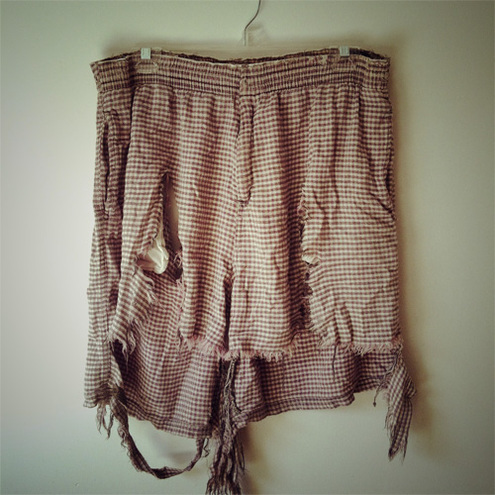 For some reason, I can’t bear to throw out this silly pair of cotton shorts. I’ve had them for eighteen-ish years, more than half my life. I don’t have any particularly good memories of them, and I mostly just wore them as pajamas or over my suit at swim meets. They’re certainly not stylish, and no major life events occured when wearing them. They started to frey at least ten years ago, and now, they literally look like my mom tried to shread a pair of pants for a pirate Halloween costume. There’s a whole cheek-exposing hole in the back, and a rip up each leg all the way to, um, crotch height. AND! Not only do I still have them, I even wear them sometimes.

And that is pretty dumb. So, since I can’t manage to get rid of them, and I definitely shouldn’t be wearing them, I’ve decide I should make something from the fabric, and keep that instead.

So – I’m looking for ideas. The fabric (suprise!) isn’t super strong, but there are a few patches of about 6×6″. I have and can use a sewing machine and notions, and am open to anything.

To say thanks for your thoughts, I’ll select three ideas from the comments at random and give you e-copies of the Make It! series of how-to books that I co-authored and edited: Mid-Century Modern, Secondhand Chic, and Hardware Store Decor.

Let ‘er rip in the comments below. (Get it?)