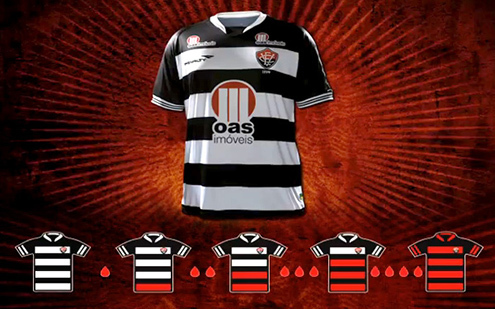 Vitória, the second-division soccer team from Brazil, changed their uniforms around for their upcoming season. The team, nicknamed the “Red and Blacks” because of their red and black striped jerseys, is promoting blood donation. So, to the surprise of fans, they changed the red stripes in Vitória’s jersey’s to white but they’ll be filled in again with red, stripe by stripe, as blood donations increase.

Once enough blood has been donated by fans (and players) the jerseys will be back to their usual red and black color scheme. This is a neat idea, especially given the intense commercialization of soccer jerseys (anyone that just watched the Euro Cup knows exactly what I’m talking about!).

[Via Who Ate All The Pies]