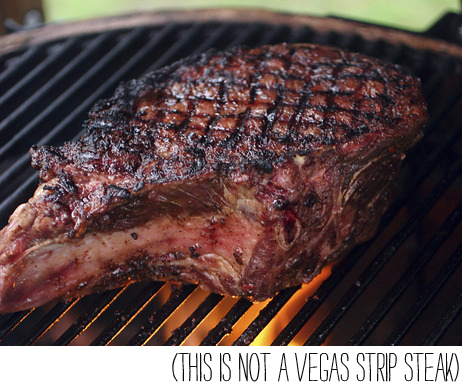 A collection of “meat specialists” have discovered the first new cut of steak from the beef carcass in years. It may also be the last possible new steak, ever.

Dubbed the “Vegas Strip Steak,” it was “deveioped” by meat expert Tony Mata and reseachers at Oklahoma State University. The cut is hidden inside the animal in part commonly ground for hamburger, and the team has sought a patent to protect their work.

‘Initially, the cut was labeled as undervalued,” Mata told the Drovers Cattle Network. ‘Whenever we can take a muscle and turn it into a steak rather than grinding it or selling it as a roast, we are adding value to the carcass.’ …The taste, tenderness, and flavor are reportedly akin to a New York Strip or Flat Iron cut. ‘The tenderness of the Vegas Strip Steak is comparable to the New York Strip Steak,’ said Mata. ‘It does not require aging or marinating to achieve tenderness and its visual appeal enhances the steak eater’s overall enjoyment.’

NPR reports, The patent actually claims the kind of knife strokes that you make in order to create this cut of meat,” [OSU researcher Steve Price] said. “You take this muscle, you make cuts here, here and here and you end up with this Vegas Strip Steak.”

The cut made its debut at David Burke’s Las Vegas Primehouse at the James Hotel. And apparently, it was quite well recieved.

Learn more at NPR and Gizmodo