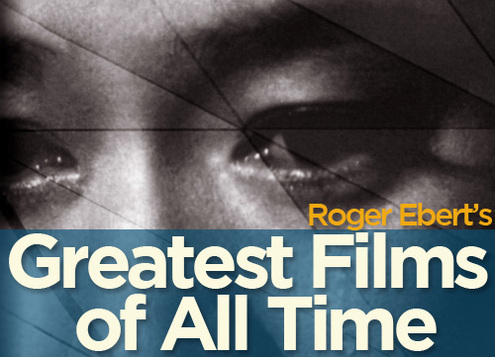 For the past forty years, the U.S.’s most well-known film critic has keep a list of the ten greatest films of all time. Once every ten years (1972, 1982, 1992, 2002), he updates the list to reflect the releases of the last decade. He says, “To add a title, I must remove one. Which film can I do without? Not a single one.”    But the new rules of Sight & Sound magazine’s poll (for which this list is created) state that each film in a series must count as its own title, one is no longer applicable, Krzysztof Kieślowski’s ten-part television mini-series, Dekalog. Ebert explains, “

That leaves only one title to be replaced: “Dekalog,” by Kieslowski. This is an easy decision, because the magazine’s new rules insist that if you vote for, say, a pair of films (“The Godfather” and “The Godfather Two”), or a trilogy (Ray’s “Apu” trilogy or Kieslowski’s “Blue, White and Red trilogy), each film counts as a separate title. Therefore, since “Dekalog” consists of ten films, averaging an hour long, it would take all ten places on my list.

So, he updates the list with one new film since 2002. He debates between two excellent options, Synedoche, New York and The Tree of Life, and ultimately determines the ten best films ever made here:

The Greatest Films of All Time

Of the list, I’ve seen eight. Headed to the library now.