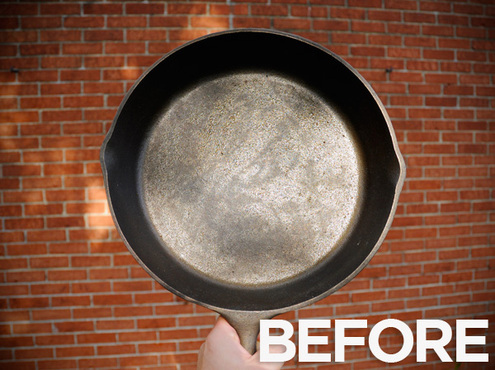 Over the last decade, there’s been a hugh shift towards discovering the things that our grandparents knew. Post-Baby Boom adults everywhere are keeping chickens in their backyards, learning to can and preserve their own produce and cure their own meats, shaving with straight razors. And, while the critics may say it’s a fad, I think it’s a pretty great development. I, too, want to interact more with what I consume, have a hand in what I eat, and, to the dismay of my grandmother who grew up on a farm and had to do these things to survive, don’t always want to take the easier, pay-for-it-so-I-don’t-have-to-deal-with-it approach.

And I’d like to recommend something else that makes my grandma call me crazy: cast iron cookware. It is, hands down, the best value in cookware out there, and coupled with a few pieces of quality stainless for sauces and boiling tasks, it can make for a solid set of cookware that will last you for centuries: the rest of your life, and for your kids as well.

Once seasoned, it’s a naturally non-stick surface that requires very little oil or lubrication to properly brown food, and clean up doesn’t require much more than water and perhaps a little salt, so no harsh chemicals necessary. Plus, it’s manufacturing process is more more friendly to the environment, and it releases none of harsh and dangerous chemicals that can come from heating Teflon on high heat. And, they can be bought very inexpensively at secondhand stores, garage sales, and online, making them a great adventure in creative reuse.

making it it perfect for the hands-on cooking with which men everywhere like to experiment. I wouldn’t trust anything else over a wood fire or hot coals, and while you can use some heavily-clad (expensive) stainless steel on a gas or charcoal grill, there’s no reason to if you’ve got cast iron. It retains heat like no other, even cooking your slow simmering soups and braises, and if you like bacon, reach for nothing else. If you don’t have a wok, cast iron makes a great substitute for high heat cooking. And for deep frying? Many say you can’t properly making southern fried chicken without a skillet, and I agree wholeheartedly. 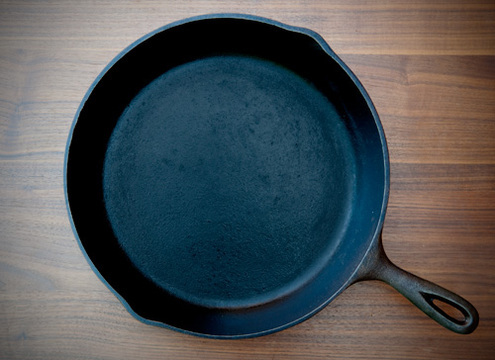 Yes, I have non-stick cookware: a 6″ for making crepes and omlettes and a 12″ for fish and other delicate foods. But 80-90% of the time I’m not using for clad stainless, it’s cast iron.

Cast iron cookware is much more available than it was ten years ago – you can usually find a 12″ skillet, cornbread molds, and a few other odds and ends at many grocery stores.

At least not new, factory seasoned. Manufacturers, namely the Lodge Logic line, have begun to add a sprayed and baked factory seasoning that stops the raw iron from rusting, but will never develop that deep, slick patina that starting from scratch can do. It can’t stand up to the extra high temperatures of an open fire, or even an induction burner. I’ve used multiple pieces of pre-seasoned cast iron, and at some point, each of their surfaces have bubbled, cracked, exposing the raw iron underneath. It’s simply not as stable as a surface as the one you can achieve with thirty minutes of work.

At this point, Lodge, one of the oldest cast iron foundary’s in the country, doesn’t even sell unseasoned cast iron, as least as far I can find on their website and in stores. Thankfully, old, poorly seasoned models are available everywhere on eBay and in thriftstores and antique shops. Many folks will get for their weddings, try it once, get frustrated by sticky, poor seasoning, and then just donate it. In which case you buy it for $5.00, and use it for the rest of your life. 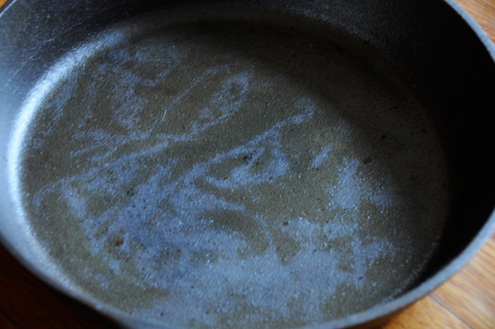 For Mother’s Day last year, I gave my mom my skillet I’ve been gently caring for and seasoning for the last five years. For some reason, she really wanted that specific one, and had been asking for it for years. And she’s my mom, so I let her have it.

I snagged a used-once 12.5″ Lodge skillet on Craigslist for $7.00, and picked it up from a women who tried it once, and then put it back in the box. She wanted to give it to me, but I felt like I should offer her a little something. I said $10, she said $5, you get it… It was covered by a sticky layer of vegetable oil and a bit of rust, which you can see in the photo above. In less than an hour of work, I had it back in shipshape, ready to go on all kinds of high heat adventures with me.

There are a trillion how-tos for seasoning cast iron on the internet. I even wrote one a few year’s back on Curbly. There are lots of methods that will work, from traditional bacon fat and shortening seasonings to olive oils to a new high heat and flaxseed oil method encouraged by the folks at Cook’s Illustrated. Just be sure to get rid of any rust, and wipe down any excess so it doesn’t get gooey. And avoid vegetable oil, which gets sticky and gloppy, as in the photo above.

Love it, use salt and water only to clean, and you’ve got yourself a very flavorful companion for life. 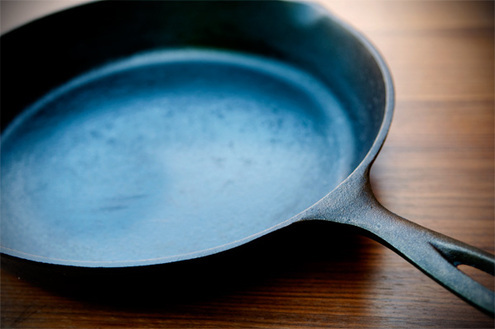