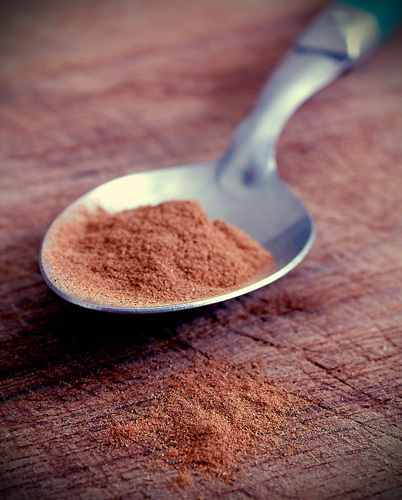 In case your not a teenage boy at a sleepover, or some college kids with a webcam, the “cinnamon challenge” is the inheritor of plenty of betyoucan’tdothis dares: eat five saltines in a minute, or drink a gallon of milk in an hour. The task sounds simple: eat a teaspoon of ground cinnamon, without drinking anything to wash it down. And now, in the era of the internet, it’s become both a trend among junior high and college kids and an online meme.   But, as Jason Bittels reports,  “You can watch thousands of people on YouTube attempting to jump on this Spice Trade bandwagon – scroll on down if you can’t wait – but almost all of them end the same way: choking, gagging, vomiting and, in the good ones, spewing clouds of cinnamon smoke like you’re some kind of gingersnap dragon.”

If you’re trying to impress your friends and looking for secrets to swallowing cinnamon, the science is against you.

The spice that magically transforms dough and sugar into a sticky bun is actually ground up tree bark, which means we’re talking about a lot of water-resistant cellulose. And according to retired physical chemist Vince Calder, the rest is “a mixture of volatile organic compounds, a major component being [cinnamaldehyde]*, which is not very water soluble.”

If you want to see this in action without risking asphyxiation, put a tablespoon of cinnamon in a bowl and jostle it until the powder is level. Using a straw, allow a drop of water to fall on the surface. Instead of saturating the cinnamon – like it would with sugar – the water just beads up and rolls around like the liquid seed of a rusty T1000.

Plus, it’s actually quite dangerous. So, while you may be tempted to try (I was), it’s not worth it. It can only end badly.

Is The Cinnamon Challenge Dangerous? [Bittlemethis]
(via Boing Boing)