You’ve heard the worn-out phrase “the greatest thing since sliced bread.” But, really, this overused comment only highlights a deeper observation: why sliced bread is such a great invention in the first place. 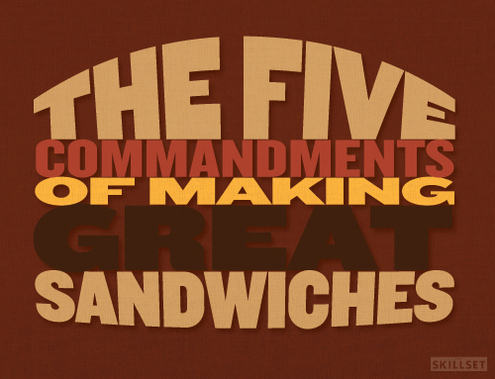 It is, of course, because sliced bread leads to sandwiches. They are, perhaps, Western culture’s greatest culinary achievement, named after an aristocratic gambler, John Montagu, the 4th Earl of Sandwich, who requested that his valet bring him his meat tucked between two slices of bread so that he could continue to eat while playing cards, without getting his cards greasy or put them down to dine.

Whether that story is true or not, no one can deny the magic of combining baked grains with other food stuffs to create a portable, all-in-one-bite package. Nearly every Western culture has its variation: the pizza, the taco, the flatbread wrap, so one thing’s for sure: the combo of a grain-based dough, some meat and veggies, a little sauce, maybe a bit of cheese, is better than simply sliced bread. It’s the greatest thing in the world.

1) Great ingredients make great sandwiches. Bread (or a tortilla, crust, or flatbread) is the reason you’re eating a sandwich in the first place. It provides not only structure to hold the whole thing together, but the essential toothsome chew that makes the experience of eating a sandwich satisfying in the first place. So, make it count, and use a fresh, artisinal-style or peasant loaf.

Likewise, slimy coldcuts can’t compete with great bread. They can only standup to anemic Wonderbread-like loaves and processed cheese, which may taste like childhood, but doesn’t really taste good.

So, stick to quality ingredients, better sauces, fresh vegetables, and you’ll have something that’s much more than the sum of its parts.

2) Great sandwiches have at least one fresh and one preserved/aged ingredient. The perfect sandwich is all about balance, and balance comes from a complementary mix of fresh and presevered or aged ingredients. Here, aged simply means something that’s had a bit of time to sit and let all of its flavors meld together: most of your sauces like ketchup, barbecue sauce, spicy mustard, most cheeses, cured meats, pickled vegetables, even jellies. A freshly cooked steak begs for an aged cheese or funky pickle, and cured ham needs the pickmeup of fresh greens and veggies to make it sing. The idea is to match the brightness and clean flavors of new ingredients with the worn-in tastiness of ingredients or sauces that have had a second to meld.

3) The order of ingredients matters as much as the ingredients themselves. Chef Tom Colicchio, of the Craft series of restaurants, including sandwich joint ‘wichcraft, says,

It needs to be constructed so that it doesn’t fall apart. Selecting the right bread is essential—it should be firm enough to absorb moisture without getting soggy, but not so firm that the contents fall out when you clamp your jaw around it. Cheese goes next to the bread to reinforce the structure. Don’t put condiments next to lettuce, or they will slide off, right onto your shirt. Greens should go on top, so that they don’t get crushed, as should anything wet (tomato, for example), so that the bottom of the sandwich doesn’t get damp. Place smaller components, like pickles, between the meat and the cheese, so that they’re held firmly in place.

Go and do likewise.

4) You gotta do at least one thing yourself. While all the ingredients for a great sandwich can be purchased at the grocery store, it’s up to you to make them sing. You can’t buy pre-sliced bread, packaged cold cuts, a head of iceberg lettuce, and some jarred mayo and make something exciting. Sure, sandwiches are often a great quick meal, but think about what you can do to add your own flair to storebought ingredients.

The difference between slicing a fresh deli pickle and a jar of Vlassic sandwich slices is immense. Store bought mustards and mayos are great, but try adding a bit to them to make them sing: a clove of fresh garlic, some lemon or lime juice, a bit of hot sauce, some fresh herbs, etc. Quick pickling your own onions, radishes, or cucumbers is easy, and worth the extra effort. Sometimes, just toasting the bread can be a game changer.

5) Once you build it, you’ve got to keep it together. A great sandwich is often a sloppy adventure. Even following the tips in commandment #3 can’t always build an indestructable edifice that can stand up to munching and manhandling. So, use the techniques employed by sandwich shops and cafes to keep things together; it’ll make your homemade sandwiches rival anything from a restaurant. Wrap 75% of your sandwich in wax or butchers paper for some external structure, or get some of those long toothpicks and make a few stabs. Often, a simple slice down the middle cuts its deconstruction potential in half, and even after the first bit falls apart, you’ve still got a whole other half in tact.

What are some of your favorite sandwich recipes? Any techinques you love to employ to make great sandwiches at home? Please post them in the comments below.