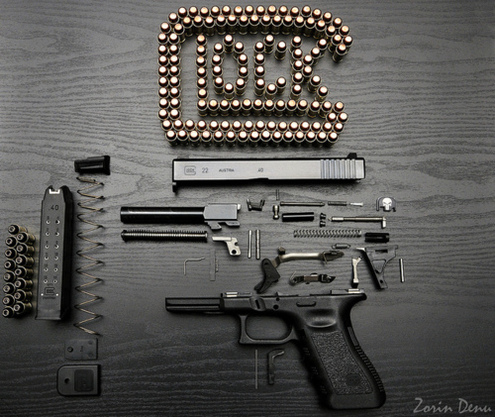 While guns, Glocks or otherwise, are not necessarily masculine and a topic for ManMade, the genres in which is so often appears – nearly every crime film, ganster lore, hip-hop lyrics – certainly cross our paths from time to time. And supposedly the standard issue service weapon for two-thirds of U.S. police forces.

So, the real question is…why? What about the glock allowed it to permiate into Hollywood films and rap lyrics? Do actually criminals prefer the glock, or is it just the fictional imagination?   Those are the sort of questions that author Paul Barret engages in his new book Glock: The Rise of America’s Gun. NPR’s Fresh Air reports,

“The Glock was adopted early on by some of the biggest names – Tupac, Dr. Dre – as soon as it appeared here, they began to embrace it for its dark, futuristic side,” he says. “The fact that it looked tough, [had a] large magazine capacity, and not incidentally, the fact that it rhymed so well with words you might want to use in rap lyrics. Within the space of a few years, you not only had the Glock showing up in lyrics, you had song titles with the name in it and people changing their stage names to incorporate Glock into them.”

Barrett appeared on yesterday’s episode, and it’s a really fascinating exploration of something that, unless you’re super into guns, probably never occurred to you. Interesting.

How the Glock Became America’s Weapon of Choice